The Real Source of U.S. Rhetoric 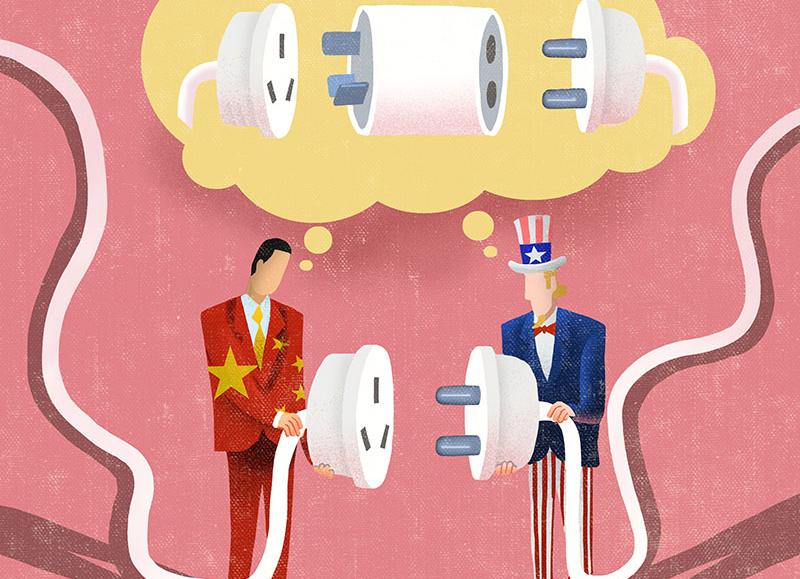 The National Security Strategy that was released recently in the United States by the Biden administration defines China as the most consequential challenge to the global order.  In recent years, the U.S. has claimed the liberal international order faces serious challenges from revisionist states —  especially China and Russia — and has repeatedly emphasized uniting democratic countries to safeguard it. Both the U.S. government and media have increasingly described China-U.S. competition as a confrontation between the U.S.-led liberal international order vs. the authoritarian international order they say China represents.

On the surface, all this seems to highlight the China-U.S. ideological struggle. In truth, however, it’s an external projection of the domestic ideological contradictions within the U.S. The so-called liberal order is actually a combination of domestic and international editions, with the former being the latter’s epistemological source, and the two echoing and depending on each other. A tremendous crisis has arisen within the domestic edition, giving rise to worries by American political elites about the liberal international order, and their wishes for helping themselves tide over the domestic crisis by spreading fear among U.S. allies.

An important background factor behind the increasing tensions — even deterioration — of relations, and the reduction of the China-U.S. relationship to ideology, is the deepening domestic crisis facing the U.S. liberal order. Francis Fukuyama’s assumption of the “end of history” around the end of the Cold War was a prominent outcome of the domestic and international editions of U.S. liberal order.

At home, America’s democratic politics and its neoliberal economic model have been seen as the optimum forms of the way for human societies to organize their political and social lives. American-style democracy was considered a model that best reflected public opinion while the idea of free market competition would bring economic prosperity. The collapse of the Soviet Union gave the U.S. a stronger sense of validation, and consolidated support for the liberal domestic order.

Fukuyama’s “end of history”  theory starts with an understanding of domestic conditions. He postulates that since history has reached an end, innovations in knowledge and system will both be futile. Any major theories raising doubts about such a model were either attacked as foolish challenges or ignored and marginalized.

The international edition that evolved thereafter takes for granted U.S. global leadership and its obligation and mission to spread its model worldwide, even by force. However, in the wake of the 2008 financial crisis, the U.S. domestic order has shown increasing defects, with the middle class withering, the Rust Belt increasingly de-industrialized and wealth gaps widening. Meanwhile, the working class lost its voice in liberal democratic politics, as everyone had become “rich.”

Bipartisan politics still showed signs of democratic competition, but the focus of their contention seems increasingly divested from reality and the masses. In the upcoming midterm elections, for instance, the Biden administration takes abortion as a focal point, and expects more women voters will cast ballots. What worries the American public the most, however, is the high rate of inflation and high prices.

The emergence of Donald Trump looked like the result of dramatically rising populism, but it was, in fact, a major manifestation of society’s dissatisfaction with establishment politics, which injected an overwhelming sense of existential crisis into the political elites. Many of Trump’s words and deeds were stunning, so he was criticized by establishment politicians as a core figure of extremist populism, President Joe Biden himself once called him a “semi-fascist.” Yet Trump has been very popular among a certain slice of the public because he is believed to a great extent to represent the wrath of those who have been increasingly marginalized over the past 30 years or more by liberal domestic politics.

As for the midterm elections, American media are concerned there could be a possible Trump comeback, as he is considered by some to be an antidote to the liberal order and rhetoric represented by such theories as the “end of history” over the past few decades.

The first thing Biden did after assuming office was to restore the authentic American ideology of the past, both at home and abroad. At home, he attempted to expand the Democratic Party’s popular base by easing public  indignation with such moves as financial relief, on the basis of the core content of the liberal order — even though it was less than effective. Internationally, by instilling fear into allies and partners with the democracy-autocracy or freedom-tyranny dichotomies in international relations, he seeks to identify enemies, enhance military alliances and consolidate a populist base in the international community.

To preserve the liberal order, American elites need to simultaneously fight on both domestic and international fronts. Domestic efforts need to be complemented by international ones. A competitive international atmosphere is conducive to establishment elites’ endeavors for rescuing the domestic order and the corresponding international order.

China should be clear-eyed about the game, and refrain from jumping into the trap, which is not one of the Thucydides kind or one of ideological rivalry. It is one that combines internal and external troubles.

U.S. China PolicyInternational OrderNational Security
printTweet
You might also like
Back to Top
CHINA US Focus 2022 China-United States Exchange Foundation. All rights reserved.