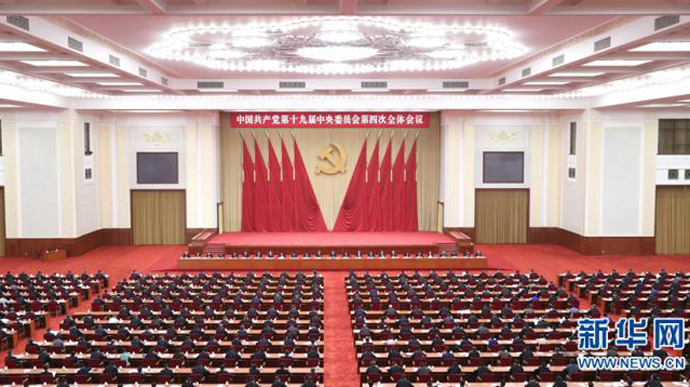 The “Resolution of the Central Committee of the Communist Party of China on Upholding and Improving the Socialist System with Chinese Characteristics and on Modernizing the System and Capacity for the Governance of China” was adopted at the Fourth Plenary Session of the 19th CPC Central Committee on Oct. 31. What does this resolution mean for China? And what does it mean for China’s relations with the United States?

How can China benefit?

Since Xi Jinping took office in 2012, he has rarely worked to separate CPC and government affairs as part of political reforms. However, he repeatedly stressed CPC leadership as the essential feature and the greatest advantage of socialism in China. The reason is that in the past 70 years, under the CPC, China first gained independence and later emerged as the world’s second-largest economy. It is now expected to become a developed and strong modern socialist country by the middle of this century.

This political system, which allows China to become independent, rich and strong, is undoubtedly an effective one and suitable for the country. Therefore, what China must do next is not conduct political reforms but rather, under CPC leadership, to improve the system and capacity for governance in order to realize the Two Centenary Goals — namely, a moderately prosperous society in all respects and a modern socialist country.

The drafting team began to function in April. It worked out a draft resolution based on a review of various CPC documents, summarizing the experiences of China’s revolution, construction and reform, especially the main theories and practices since the 18th CPC National Congress, and reviewed discussions. At the beginning of September, the first draft of the resolution was distributed to certain members of the CPC, including veteran members, for discussion. These people proposed 1,948 revisions, 436 of which were accepted. In addition, supplements were made, content was rewritten and wording was improved in 283 places. The resolution was finalized with 15 parts and 18,449 Chinese characters. Its main significance is that it answered the questions of what China should uphold and strengthen and what it should improve and develop.

How will it affect Sino-US relations?

China’s first consideration is not diplomacy but the decisive factors that affect its present and future. By design, the resolution did not mention the United States. However, the U.S. is the country that exerts the most influence over China, although the impact is significantly less than when China first launched its policy of reform and opening-up. Moreover, the process of drafting and revising the resolution coincided with the Sino-U.S. trade war. This could not be ignored in the drafting process.

In his explanation of the resolution, Xi called it a powerful guarantee of China’s success in response to risks and challenges, and that it positions China to take the initiative. These risks and challenges come from economic, social, natural, domestic and foreign sources.

The U.S. factor is undoubtedly an integral part of the foreign risks and challenges. Thus, China must uphold and improve its socialist system with Chinese characteristics, modernize its systems and capacity for governance and “use the power of the system to cope with the impact of risks and challenges.”

The resolution emphasizes the need to improve the national security system, pursue a holistic approach to national security, balance development with security, improve mechanisms for identifying and defusing national security risks and boost China’s ability to guard against and defuse those risks. Therefore, in its diplomacy with the United States, China will think about worst-case scenarios and work to play a greater role in setting the agenda for bilateral relations.

Maintaining peace and realizing development remains China’s central task. The resolution emphasizes that the country will uphold an independent foreign policy of peace, promote the building of a human community with a shared future and advance the establishment of an open system of cooperation and win-win results. To this end, China will follow the global governance principle of achieving shared growth through discussions and collaboration, actively participate in the reform and development of the system for global governance, stand for multilateralism and democracy in international relations and work to reform the mechanisms of global economic governance.

The resolution also emphasizes that China will uphold the mutually beneficial strategy of opening-up, contribute to high-quality development in the Belt and Road Initiative, safeguard and improve the multilateral trading system, promote trade and investment liberalization and facilitation and help create a global free trade zone network with high standards. The resolution stresses that China will also support other developing countries in improving their capacity for independent development and contribute to an open world economy. And it will help resolve issues such as uneven global development and the digital divide.

It can be seen that, while thinking about worst-case scenarios, China has not closed itself and has no intention of “decoupling” from the U.S. or pursuing a comprehensive confrontation with it. On the contrary, China will continue to promote the BRI in an open and inclusive manner. It welcomes the continued cooperation of institutions, individuals and the government of the U.S. It believes that both China and the United States have many areas and issues on which they can cooperate, including in third-party markets.

U.S. China PolicyU.S.-China RivalryU.S.-China Ties
printTweet
You might also like
Back to Top
CHINA US Focus 2022 China-United States Exchange Foundation. All rights reserved.