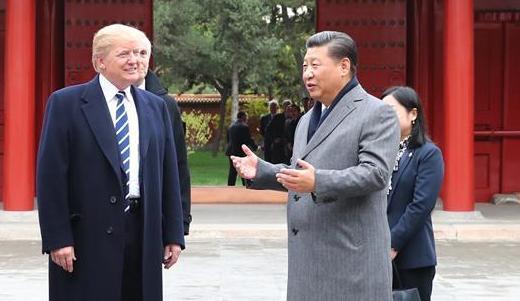 Due to various causes, China’s strategic posture in East Asia and the western Pacific after Xi Jinping became China’s top leader in November of 2012 until roughly a year prior to the Chinese Communist Party’s 19th National Congress this October was mainly characterized by assertiveness and hardline actions. Such a posturing resulted in both positive and negative consequences for China from a Chinese perspective. However, China’s strategic behavior in the same region began to moderate as situation shifted both at home and internationally. This trend started even before Donald Trump’ election as the U.S. president. China began to soften its posture over South China Sea on the eve of G20 Summit held in September 2016 in Hangzhou.

Still, the Trump win was a tipping point in the sense that he installed fear on China, primarily through his rhetoric against China’s trade practice which, if became real policy, would damage China’s economy and finance. His phone call with Taiwan’s Tsai Ing-wen soon after his election, and his tweets to use “One China” policy as a bargaining chip was also highly disturbing to China. China worried that Trump was very anti-China, very adventurist, and very Machiavellian. This fear tactic worked almost immediately: Xi was extraordinarily patient and prudent in dealing with Trump. Xi stood firm only on the core issue of Taiwan and the “One China” policy, and largely refrained from speaking ill of Trump in public. Instead, China did its best to cultivate good will and connections in Washington.

China’s strategy was a success. Almost overnight, Trump flip-flopped to endorse, like his predecessors, the “One China” policy. This outcome boosted Xi’s confidence in managing Trump. But “managing” was reciprocal: Xi was extraordinarily accommodating to Trump on the issue of North Korea, and tolerated Trump’s extraordinary military rattling against China’s principle of “There must be no war” in the Korean Peninsula. Furthermore, President Trump soon created, somewhat inadvertently, a surprisingly excellent atmosphere at the Mar-a-Lago summit with President Xi with lavish compliments praising Xi as a strong, friendly world leader. This had helped further moderate China’s strategic posture.

So, there has been an emerging pattern of moderation and restraint. Strategically speaking, the moderation or retrenchment should be quite positive for China’s overall interest in the long run, because of its nature of delaying the Clausewitzian “culminating point of victory”.

First, China’s behavior toward North Korea’s adventurism has become extremely harsher than before, doing so much and so quickly that the previous Chinese leaders had been either unwilling or dared to do. Moreover, Xi exercised extraordinary restraint over South China Sea and sought to improve relations with ASEAN and its member states, especially Vietnam, the Philippines, and Malaysia to stabilize maritime situation and increase Chinese diplomatic influence. And even for a few months, there was no further statements on the importance of China-Russia strategic partnership and military cooperation, for the benefits of the relationship with Washington. There has perhaps been less naval activities in the sea near Japan - President Xi has repeatedly indicated since late May that China hopes to substantially improve relations with Japan. China and Japan might resume their formal summits that had been suspended for several years. Relations with Singapore saw marked improvement, too. Previously the relationship deteriorated to the lowest point due to Singapore’s position over South China Sea.

Quite encouragingly, the pattern of moderation or retrenchment continued and was reinforced around the Chinese Communist Party’s 19th National Congress. The Party Congress was instrumental in charting China’s foreign policy in the foreseeable future. Toward the end of August 2017, all of a sudden both India and China withdrew troops along the strategic border area of Doklum to end (or exactly speaking, to suspend) the months-long military stand-off. China also took out bulldozers that were constructing a road on the plateau that was in the first place caused by Indian intrusion. Moreover, a breakthrough in China-ROK relations dramatically emerged on October 31: shortly after the end of the 19th Party Congress, China de-linked relationship between THAAD deployment and the overall China-ROK relations. In fact China abandoned the policy it insisted pm for more than one and half years.  It is enlightening to observe that China is willing to make substantially concession unilaterally to a smaller country for overall strategic interests, in a time of historic chance provided in a large degree by Trump’s “America First” (or as it were Alienating the World) disposition in general.

As for China’s foreign policy orientation in the “New Era” proclaimed by Xi at the 19th Party Congress, there would be three longer-term trends considering what President Xi has been doing in the past five year:

1. To broaden and deepen China’s involvement in global political economy and global governance, and seek leadership roles in selected areas.

2.To achieve China’s economic and diplomatic preponderance in Asia and beyond

3. To establish finally China’s strategic dominance in the western part of the western Pacific (from China’s seacoast to the first island chain).

Finally, as to President Trump’s recent “state visit plus" to Beijing, one could quote New York Times that, with China’s full carefulness to meet his vanity (as so many other countries), the lavishing of “Trump’s warm words, on a state visit to China replete with ceremony but short of tangible results, showed a president doubling down on his gamble that by cultivating a personal connection with Xi....It was a remarkable moment in the story of China’s rise and the United States’ response to it, with Trump’s performance suggesting a tipping point in great-power politics. By concluding that the United States can better achieve its goals by flattering a Chinese leader....Trump seemed to signal a reversal of roles: The United States may now need China’s help more than the other way around.” Undoubtedly, President Xi will exploit this strategic situation at his best.