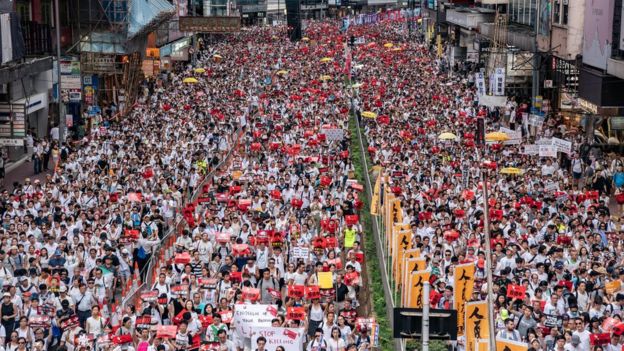 The Hong Kong crisis has yet to be resolved and some policymakers already are placing blame. For instance, last month think tank scholar Andy Mok argued that the most “proximate cause [of the unrest] is intolerance toward the Chinese mainland.”

As a result, he wrote: “the city’s established socioeconomic hierarchy was upended, resulting in anxiety, discontent and resentment in Hong Kong. This created an opening for the infection of liberal democracy.” Underestimating the source of popular discontent in this way risks making the situation far worse.

Beijing’s restraint eased negotiation over the return of Hong Kong from the United Kingdom. This softer approach also aided China’s appeal to Taiwan. The latter was particularly important because the cost of using force to extend Beijing’s control would be horrendous and would forever taint the island’s relationship with the mainland.

However, under President Xi Jinping the PRC is taking a very different course. The government has decided to focus on strengthening party authority at home and aggressively asserting Beijing’s interests abroad. In doing so the China has made its mark. Few today are unaware of the country’s extraordinary potential.

Yet assertiveness has come with at a high price. It is difficult to assess attitudes within the PRC. But internationally Beijing is facing substantial blowback. Neighboring states have armed and cooperated militarily. In several East Asian nations, large numbers of people believe Chinese economic growth and investment by the PRC are bad. Strong majorities fear Beijing’s growing military and have little confidence that Xi will do the right thing.

Australia is increasingly worried about Chinese meddling in domestic politics. Relations with South Korea have gone sharply negative, following Chinese retaliation over deployment of the THAAD missile system. Taiwan’s relations with and popular attitudes toward the PRC also have deteriorated.

Even more dramatic are events in Hong Kong. Residents have clearly demonstrated their disappointment with Beijing’s rule. The nature and quality of the relationship of SAR to China is now in the balance. PRC officials should not underestimate the challenge posed if the city of some 7.4 million people ends up in seeming opposition to the central government.

Some Chinese suggest “patriotic education” as the answer. Teach Hong Kongers to support, respect, and perhaps even love the Beijing regime.

A high school teacher from Fuzhou was quoted complaining that SAR textbooks had not been reviewed by mainland authorities: “Therefore, they still teach students that the Chinese government is very bad.” Mok endorsed “raising the moral standards of its citizens,” which, he argued, “is crucial to strengthening Hong Kong’s immune system.” The director of the Hong Kong and Macau Affairs Office, who serves under China’s State Council, last month called for education to make city residents more “patriotic” and insisted that “patriots” should dominate those chosen to govern the SARs.

The PRC’s Department of Education previously ordered school texts to reflect “red culture.” Books are to promote “love for the Party, the country, and socialism” and pass on the “red gene.”

In mid-November the CCP Central Committee approved guidelines to promote patriotism among “people from all walks of life,” especially students. The indoctrination program was to begin with the very young: “We must make full use of classroom teaching, and cultivate students’ patriotic feelings so as to train the next generation to build and inherit socialism.”

The system is to be applied to Hong Kong and Macau. The State Council announced that Beijing must “guide people including compatriots in Hong Kong and Macau Special Administrative Regions and Taiwan compatriots and overseas Chinese to enhance recognition of [China as] their country, and consciously safeguard national and ethnic unity.”

In this program schools and education are just the start. The “spirit of patriotism” is to be written into laws and regulation, as well as business and civil society norms. Organizations are to use art, calligraphy, dance, drama, music, and social media in ways to “reflect the requirements of patriotic education.”

Also of concern to Chinese officials have been Chinese university students who posted their support for the Hong Kong demonstrations. In response, Henan province schools launched campaigns on the issue, featuring lectures by professors from the School of Marxism. In Shandong province professors endorsed the government’s right to use force. Some universities began conducting random checks of teachers’ lectures for “wrong ideological tendencies.”

The objective is more about love of party than love of country. The State Council insisted: “Educational material must also resolutely safeguard Xi Jinping Thoughts in companies, the countryside, institutions, campuses, communities, military camps, and online.” One could easily mistake this for Mao Zedong’s policies at the nadir of his rule.

The demonstrations in Hong Kong pose an unprecedented challenge to Beijing. They reflect the fact that those who grow up in a free society usually want to continue living in one. Whatever the impact of a cradle-to-grave propaganda system in the PRC, it won’t work in Hong Kong—or Taiwan. Residents already understand the alternatives and freely express their opinions.

Which means Zhongnanhai must make a case for the PRC without threats and arrests. People who have not grown up on the Mainland are unlikely to view it reverently. Demanding that they do so won’t work. Rather, such an approach will drive more people away.

Indeed, the harsher the treatment by Beijing, the less open Hong Kongers (and Taiwanese) will be to Chinese influence. And the worse Hong Kong goes, the tougher it will be for China to address Taiwan’s future status. Ultimately, Beijing must convince ethnic Chinese elsewhere that the PRC can rule well, that is honestly, justly, and liberally. That requires positive behavior, not thoughtless indoctrination.

Hong Kong
printTweet
You might also like
Back to Top
CHINA US Focus 2021 China-United States Exchange Foundation. All rights reserved.