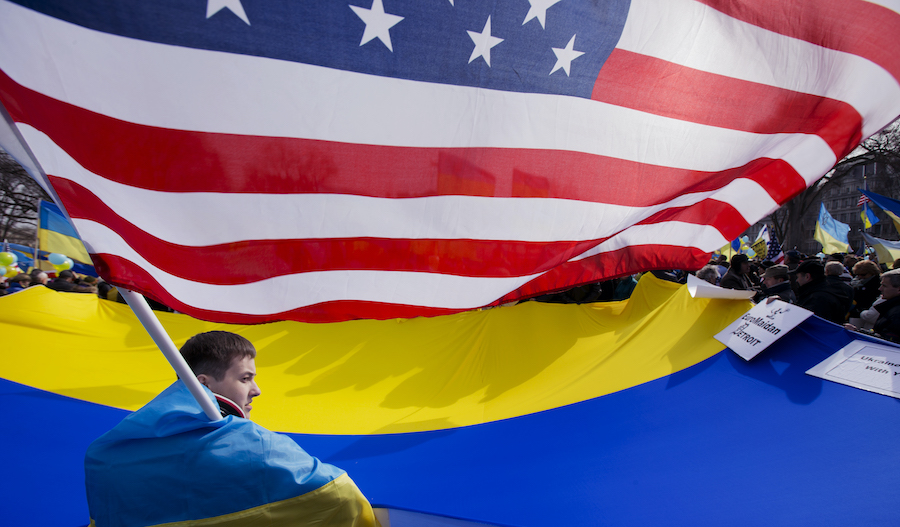 Behind the Russia-Ukraine conflict is a rivalry between the United States and Russia — a tug-of-war that also involves NATO, Ukraine and other parties. Regardless how the war evolves, the Ukraine crisis will become a bleeding wound for Europe and could siphon off U.S. overseas resources over a protracted period of time, thus derailing America’s global strategy or rendering it lopsided. This is by no means an opportunity for China, as the outcome would create a world of more complex political structure, with China facing an external security environment with more risks and an America with a more urgent sense of a “China threat.”

The Ukraine crisis is essentially a geopolitical conflict, not a rivalry between democracy and autocracy, as the West claims. It is a consequence of NATO’s eastward expansion. Also, it has rekindled grave concerns by the U.S. regarding the China-Russia alliance. The Biden administration, driven by misgivings about Russia’s military power, acquiesced to a sphere of influence and double standards upholding the interests of its allies. It saw no reason to tamp down tensions in Ukraine. Rather, it pushed Ukraine toward war on grounds that it would be fighting for the values of Europe and the world. The rhetoric of values-based diplomacy rings hollow in light of reality.

The Russia-Ukraine conflict has exposed the fragility of the U.S. idea of “a foreign policy for the middle class,” which underpinned Joe Biden’s global strategy readjustments during his first year in office. Its primary implication is that the U.S. must repair its domestic power and cultivate a long-term competitive advantage over China. The second implication is that it must strengthen its economic leadership in external engagements.

The fact that last year’s withdrawal from Afghanistan ended up in a major debacle demonstrates the malfunction of the conceptual basis of U.S. foreign policy. When foreign policy was reduced to a mere campaign slogan carrying a promise to increase working-class income, it sidelined the fundamental meaning of diplomacy for national security. It also failed to provide solutions to geopolitical and transnational problems, and was simply unable to respond to major overseas emergencies.

The elites or the establishment class had hoped to show their dedication to people’s well-being, but repeatedly failed to respond to external security events. Further, with the Russia-Ukraine conflict leading to higher inflation and oil and gas prices for U.S. consumers, the middle class now bears the brunt of the economic disruptions, while Wall Street and the military industrial complex are once again making a fortune from war.

The Russia-Ukraine conflict has derailed the U.S. attempt to co-opt Russia to contain China. The Biden administration has never had high expectations for U.S.-Russia relations. Only a “stable, predictable U.S.-Russia relationship” was desirable so that the U.S. could put more effort into dealing with China. Now that the U.S. realizes that Russia remains firmly committed to pursuing its geopolitical ambitions, heightened U.S.-Russian tensions and confrontation is a foregone conclusion.

Continued U.S. containment of China severely constrains its options for dealing with Russia relations or other crises. After 10 years of effort to abandon two-front warfare as a defense approach, the U.S. is now faced with two fronts with China and Russia in both Asia and Europe. The fact that the U.S. grand strategy is in danger of losing focus will make it a must for the Biden administration to rewrite its national security strategy, the publication of which was postponed in February.

The Russia-Ukraine conflict also casts a shadow over the U.S. Indo-Pacific Strategy, which is at a critical juncture of going from promise to practice. U.S. allies in the Asia-Pacific region have long held suspicions about the U.S. commitment to walk the walk, and they doubt its staying power in the region. They are now even more worried about the U.S. being distracted by European affairs. The U.S. not only needs to “return to Europe” in terms of troop presence, military aid and defense spending but also faces greater difficulties in mobilizing European allies to focus on the Indo-Pacific, considering that Europeans now see the Ukraine issue as a more direct threat.

Of course, the U.S. will continue to attach importance to the Asia-Pacific region and will continue to transform and upgrade the traditional U.S.-centered hub and spoke system, with multiple bilateral alliances. It will build a latticework of flexible partnerships, institutions and alliances, such as Quadrilateral Security Dialogue, AUKUS and Five Eyes Alliance so that they constitute a complementary structure for U.S. defense forces.

However, the Biden administration’s previous efforts to make European and Asian allies more connected and interoperative — which was intended in all directions — ended up looking back and forth. The U.S. has fallen into a self-made dilemma in that deepening relations with some allies inevitably means offending or even leaving others out. The process of shifting the strategic center of gravity to the east has encountered obstructions anew, similar to what happened to U.S foreign policy after Sept. 11, 2001, and the Arab Spring in 2011.

Furthermore, the international credibility of the United States has now been thrown into question. As Harvard professor Stephen Walter put it, the U.S. cares about its credibility in large part because it is a tool for its geopolitics and grand strategy. Failure to deliver on promises, or signs of weakness, will diminish allies’ trust in the U.S., dampening its appeal and leadership. When U.S. forces withdrew from Afghanistan, the authorities defended the decision by arguing that Afghanistan lacked geopolitical importance. The same rhetoric sounds even less convincing when Biden reiterates that U.S. troops will not fight on the ground in Ukraine.

The U.S. has also encountered difficulties in isolating Russia internationally. With the exception of the U.S., Europe and a few Asian allies, the international community has not acted in sync with the U.S. on sanctioning Russia. Some have weighed the tradeoffs, some have remained neutral and some continue to trade with Russia.

European countries are dependent on Russia to various degrees, but generally more so than the U.S., and therefore their sanctions against Russia are not fully aligned. European panic about Biden’s unprepared remarks in Poland that Vladimir Putin “cannot remain in power” reveals that if the U.S. side harbors the unstated goal of regime change in Russia, it will greatly intensify divisions between the U.S. and Europe.

Regarding U.S. policy toward China, in the short term the U.S. side may moderate the confrontational aspects because of its need to handle the burning issues in Europe, but there has been no fundamental change in U.S. perceptions or strategy with respect to China, and no major change in tactics either. As noted in the March 28 Fact Sheet of the National Defense Strategy report, China remains America’s “most important strategic competitor.”

The ballooning defense budget for 2023 also makes China a target. Since the Russia-Ukraine conflict began, the U.S. has used a policy mix of pressure and co-opting. For example, it initiated a series of phone calls and meetings with Chinese officials, demanding that China cooperate with U.S. over Russia. But it threatened sanctions and punishment against China, and even wanted to tie China to the war chariot.

On the Taiwan issue, U.S.-Taiwan interactions have deepened. While the U.S. side has notched up its appeasement policy toward Taiwan, it has also ratcheted up threats and blackmail against the Chinese mainland, giving free rein to over-the-top rhetoric from anti-China hawks. This suggests that the risk of a U.S. miscalculation in its relations with China is on the rise.

The Russia-Ukraine conflict gives rise to a new political architecture in the world. China is not likely to sit idle as a mere spectator, nor will it take sides or profit from war. Rather, it will assume its due international obligations and take action as befitting a major power to stop the hot war, forestall a cold war, safeguard peace, pursue development and foster shared security.