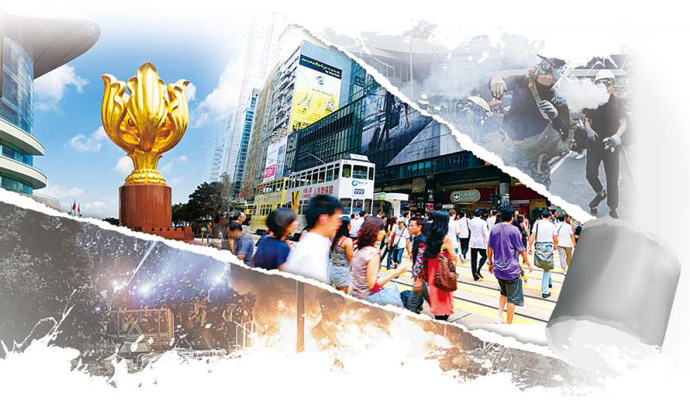 Demonstrations triggered by the proposed amendment of the fugitive offenders law in Hong Kong have been going on for more than 100 days unabated, sometimes accompanied by violence, vandalism and other illegal behavior. Intervention and even manipulation by external forces is apparent. However, it takes more than one cold day for the river to freeze three feet deep. The fundamental reasons for the unrest are internal not external. As Mao Zedong put it, “External causes become operative through internal causes.”

The concept and practice of “one country” not only involves sovereign diplomatic or security affairs but also (and more significantly) the state and its system, along with the institutions of governance established under that system. “Two systems” involves the maintenance — within the “one country” state and system — of governing institutions in Hong Kong that are different from those on the mainland because of Hong Kong’s special course of history. The purpose of “one country, two systems” is to maintain long-term stability and prosperity in Hong Kong. The state and the system of “one country” are the fundamental basis and guarantee for the “two systems.”

Furthermore, safeguarding the “one country” system is a fundamental element of national identity, one formed on two foundations. The first is civilizational/cultural identity of people with their own nation. Ethnic Chinese in all parts of the world represent such an identity. The second is identity with the state and the system of one’s own state — or citizen identity — whereby a citizen endorses the state and system of his or her own country, complies with the institutions and laws established under that system, undertakes civic duties and enjoys the rights and interests of a citizen protected by the state. The history of China and other countries has proved that the existence and development of any modern state requires that its people possess a conscientious and firm cultural and citizen identity. Without these, the state can hardly survive.

However, since Hong Kong’s return to Chinese sovereignty, “one country, two systems” has been blurry or even significantly flawed in both theory and practice. For example, sovereignty over region belongs to China. In this connection, Hong Kong’s institutions of governance, and all its political, economic, cultural and social systems, must be subordinate to the fundamental law of the state and system — that is, the Constitution of the People’s Republic of China. Yet unconstitutionality has been pervasive in Hong Kong’s governing institutions and practices. The result is that the “one country” has been continuously weakened and squeezed out, while Hong Kong’s system has been constantly strengthened to the point of eroding or even contending with the state and system of “one country.” It is thus increasingly difficult to keep the “two systems” within “one country.” Moreover, long-term colonial rule led to cultural estrangement between Hong Kong and the mainland. Both Hong Kong people’s cultural identity and their citizen identity with the “one country” have been weakening.

To maintain stability and prosperity, the institutional arrangements and policies upon Hong Kong’s return favored the elites. That continues even today without readjustment. Thus, “Hongkongers administering Hong Kong” is in reality rule by the elite. Because of long-term colonial domination, political and social elites never thrived, whereas the holders of big capital have been the mainstream elite. The nature of capital — the pursuit of profit — made it impossible to serve the common people, who make up the majority. Elite governance has thus developed into a chronic disease blocking Hong Kong’s development.

First, the fundamental interest of the capital elites lies with weakening the “one country” while strengthening the “two systems.” The looser the state jurisdiction, the wider the gap between the two systems and the bigger the room for profit and maneuvering. Since its return, all major demonstrations in Hong Kong have occurred at moments when the special administrative region moved to strengthen the central government’s role or to restrict big capital, especially via legislation. On the surface, it is the opposition that started the unrest, and led at the forefront. And it was the capital elite who manipulated and profited behind the scenes. It’s hard to imagine in an entrenched capitalist society like Hong Kong that public opinion and the media would always disproportionately support elements of demonstration and unrest. It is also hard to imagine that large-scale demonstrations would be sufficiently resourceful to persist unabated for a long time. The various demands of the demonstrators have all been designed to strengthen the “two systems” and weaken the “one country.”

Second, during the protracted period of colonial rule, the educational system, resource allocation and content taught in schools all favored the elite class, with the purpose of solidifying those serving colonial rule. Little progress has been made in decolonization in education since Hong Kong’s return because the elites have never been inclined to change an educational system formed during the colonial period in favor of themselves. On one hand, education with a thick colonial color erodes the young generation’s sense of identity with their motherland on a daily basis. On the other, as the mainland continuously opens wider to the outside world and develops rapidly, the majority of middle- and lower-class commoners feel increased frustration and a sense of loss. They see no hope for a rise in their social stratum as they experience a relative decline in living standards. And that frustration and sense of loss finally erupted with great anger.

Third, an untempered capital elite inevitably leads to monopoly, strangling competition and innovation. The reform and opening-up on the mainland, economic globalization and generous support from the central government have provided Hong Kong with the most favorable conditions in an all-around way. But monopolies have distorted the Hong Kong economy, leading to protracted reliance on the highly lucrative and captive real estate and financial service sectors. Although there are outstanding universities and strong R&D capacity, high-tech and other industries that should have led economic development have been squeezed and have found it hard to grow in Hong Kong. While having the appearance of prosperity, the economy actually lacks vitality. The monopoly of big capital has milked the common people dry and led to huge wealth disparities. Hong Kong stands among the worst in the world with a Gini coefficient of 0.6. The other consequence of monopoly has been the continuous loss of quality jobs in the market and long-term sluggishness or even decline in the size of the middle class and its income. As a result, the young students, who should have been the most active and creative in economic development, have become the most frustrated and angry.

Fourth, elite governance had led to alienation of the people from their government and administrative policies. The various measures proposed by chief executives to tackle the housing problem, for example, have been aborted by sniping from within the elite group of vested interests. The chief executives have paid a price for their proposals.

The summer of demonstrations and unrest in Hong Kong has been unprecedented, characterized by strong momentum, cohesive public opinion, lengthy duration, extreme means and resolute, high-profile demands. The prime movers and organizers have exerted themselves to the utmost to steer the demonstrators’ anger to the central government and have stopped at nothing to draw direct intervention from the central government, thus pushing the latter into a trap, which can be stated as, “The Beijing regime regards Hong Kong people as enemies.” On the other hand, they have also strained every nerve to sow discord between residents of the Chinese mainland and Hongkongers, which only stores up trouble for the “one country, two systems” policy in the long term. Apparently alerted to the scheme, the central government has not been taken advantage of. With consistent full confidence in the SAR government’s ability to quell the unrest, the central government fully supports Hong Kong’s police in taking resolute action against the thugs. Nevertheless, the key to a solution must start wit h a realization within the elite group of vested interests in Hong Kong that their two-minded profiteering attempts will ultimately only harm their own home.

Too much water drowned the miller. The series of violent incidents — the storming of the local legislature and the central government’s liaison office, obstruction of traffic, the paralyzing of the airport and other radical and extreme acts by the few elements for “Hong Kong independence” and deceived youngsters — have eliminated any justification for popular support. The unrest will certainly be quelled; the perpetrators will be sanctioned by law. However, it will take a long time, great patience and painstaking effort to address the various problems that the demonstrations have exposed. The prosperity and stability of Hong Kong will be secured only after the root cause of its illness is dug out. In this connection, the central government’s decision to build Shenzhen into the pilot demonstration area for socialism with Chinese characteristics while developing the Guangdong-Hong Kong-Macao Greater Bay Area represents a critical step forward.

Hong Kong
printTweet
You might also like
Back to Top
CHINA US Focus 2021 China-United States Exchange Foundation. All rights reserved.