Middle East on the Brink — Again 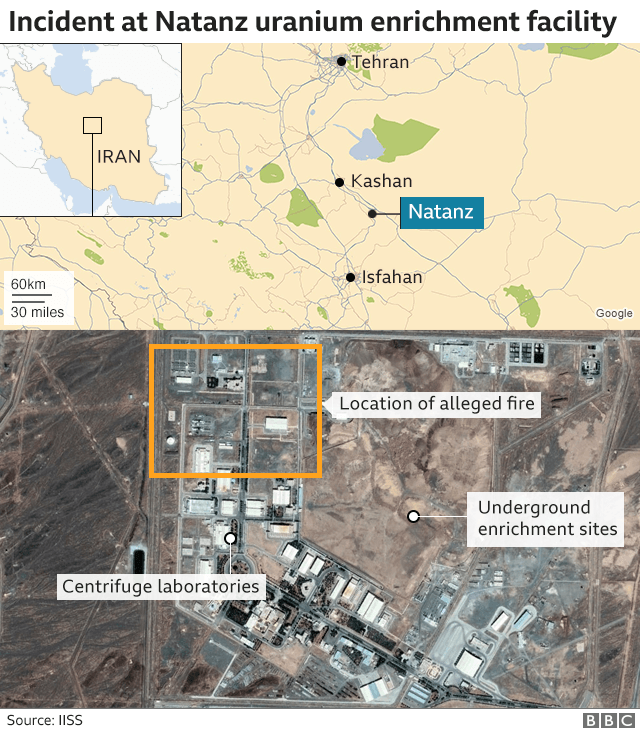 A massive mushroom cloud rose from a huge explosion at the Natanz nuclear facility in Isfahan province, central Iran, on July 2. Over the previous 10 days, a chemical plant, two power plants and a missile production plant in Iran had also been attacked.

The serial attacks dealt a serious blow to Iran's nuclear capabilities. The nuclear facility, missile plant, chemical plant producing related materials and other plants powering those facilities have all been targets believed to be closely linked to Iran’s nuclear research and development.

And at the heart of it all, of course, is the Natanz site, which hosts one of Iran’s most important nuclear facilities and the only plant capable of producing advanced centrifuges on a large scale. The blast is believed to have destroyed at least three-fourths of the site, directly delaying Iranian centrifuge production by one or two years. Without centrifuges, weapons-grade uranium will not be available, let alone complete nuclear weapons.

Who chose to kill Iran’s nuclear facilities at this moment? The New York Times reported on July 5 that Israel had apparently engineered the event at Natanz, using powerful explosives to destroy the site. Senior Israeli intelligence officials and the Israeli foreign minister also seemed to suggest responsibility, saying that Israel “has the ability to attack” and that it “will not allow Iran to gain nuclear capability, and to that end, it would be best if we did not talk about our actions.”

Although the Israeli government has not publicly acknowledged the attack, the country is widely believed to have been responsible on the basis of motive, capability and history. The small, embattled state of Israel is most worried by the prospect of nuclear weapons in the possession of an enemy in the Middle East. Former Iranian President Mahmoud Ahmadinejad’s stated goal to “wipe Israel off the map” provided a powerful motive for Israel to forcibly resist Iran’s nuclear efforts. To protect its security, Israel bombed Iraq’s nuclear facilities in 1981 and paralyzed the Natanz centrifuge plant with cyberattacks in 2010.

The recent attacks on Iranian nuclear facilities have pushed the Middle East the brink again. The assassination of General Qasem Soleimani, commander of Iran’s Islamic Revolutionary Guards Corps Quds Force, by the United States with a drone in early January brought the two countries, already in tense standoff, to the brink of war. Not long ago, Iran issued an arrest warrant for U.S. President Donald Trump, demanding that he be held responsible for the death of Soleimani.

The latest round of attacks on Iranian nuclear facilities has raised the possibility of a confrontation or even direct military conflict between Iran and Israel. In recent years, with the strong support of the Trump administration in the U.S., Israel has taken a more aggressive approach to Iran and the Palestine conflict. The U.S. and Israel share the same goal of curbing Iran’s nuclear capabilities and regional influence. Israel may act where the U.S. finds it inconvenient to get involved directly.

From the Israeli point of view, Iran, which is currently under the dual pressures of the COVID-19 pandemic and international sanctions, appears to be vulnerable. But the assumption that Iran, under internal and external threats, will swallow the bitter fruit of the destruction of its nuclear facilities without any retaliation reflects a gross underestimation of the country’s will and energy. A battered Iran is not going to let it go.

Senior IRGC generals have vowed to extract “blood for blood” over the crimes of Israel. It is reported that the Iranian military has put in place a variety of weapons and missiles along the 2,200 kilometer coastline in southern Iran and built many “missile cities” both underground and in coastal waters. The IRGC Navy has also deployed 23,000 troops and 428 speedboats off the southern coast.

Iranian officials described those long-range missiles and new military vessels as “more powerful than the enemy could ever imagine.” Iran also quickly signed an agreement with Syria to speed up defense cooperation, and a large number of Iranian anti-aircraft missiles have recently been deployed in Syria to help the country strengthen its air defense capabilities. Syria could become the battleground in a direct military conflict between Iran and Israel.

Although Israel is the pillar and agent of U.S. policy in the Middle East, it is difficult to hold the U.S. hostage to its tough diplomacy and military adventurism in the Middle East. If Israel’s risky raid on Iran’s nuclear facilities were to bring Iran to heel, the White House would relish a diplomatic victory that would add to Donald Trump’s electoral fortunes.

On the other hand, if Iran’s tough response leads to a military conflict between Israel and Iran, the U.S. will not likely get involved, as the November election is just three months away. A war would not only burn Israel but also Donald Trump’s presidency.

Middle EastRegional SecurityGeopolitics
printTweet
You might also like
Back to Top
CHINA US Focus 2022 China-United States Exchange Foundation. All rights reserved.