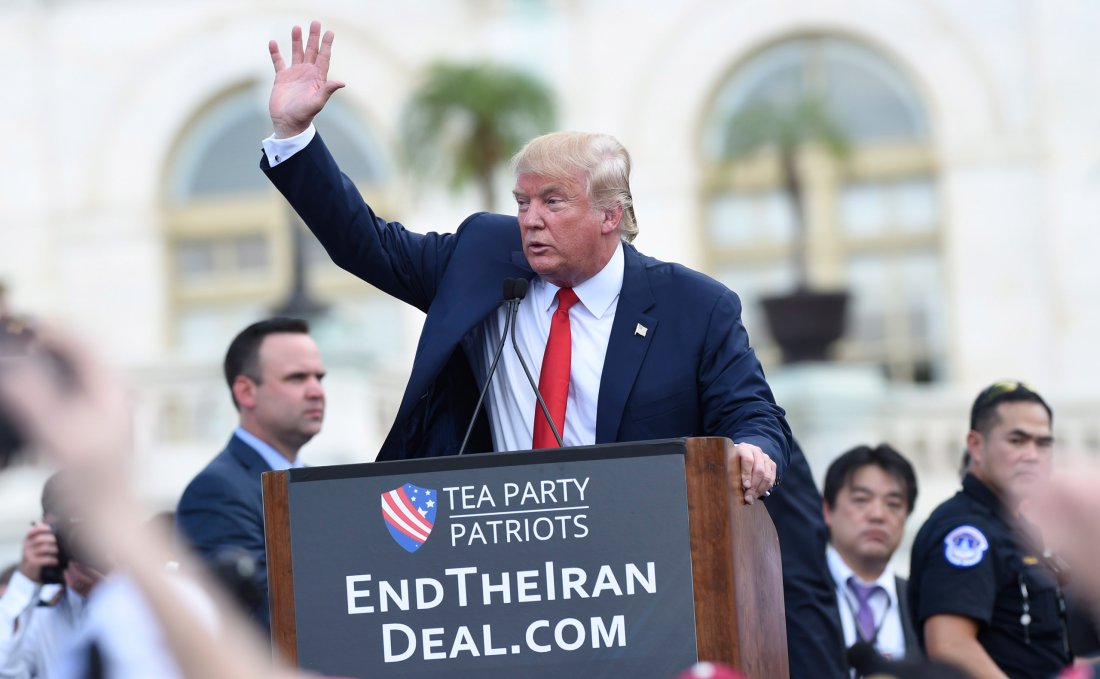 Then Republican presidential candidate Donald Trump waves to the crowd after speaking during a rally opposing the Iran nuclear deal outside the Capitol in Washington, Wednesday, Sept. 9, 2015. (AP Photo)

At the core of the Iran strategy President Donald Trump unveiled on September 13 is an attempt to renegotiate the nuclear deal and cut off Iran's access to nuclear weapons. Trump neither confirmed Iran’s compliance with the deal, nor announced the US withdrawal from it, leaving it to Congress to pick up the pieces. Trump's approach will create uncertainty and open new rifts in trans-Atlantic relations.

As always, Trump continues to label the deal as seriously defective, calling it the worst international agreement the US has ever signed. In order to "repair" the deal, Trump proposed adding new clauses to it, including cancelling the "sunset provisions" to permanently restrict Iran's nuclear activities; checking all of Iran's nuclear facilities, including military ones; and building mechanisms to prevent Iran from developing intercontinental ballistic missiles.

To build pressure on Tehran, Trump’s strategy also attempts put the Islamic Revolutionary Guard on the sanctions list, and to prevent Iran from allegedly funding terrorists. Yet Iranian President Hassan Rouhani stated on September 13 that the US can't unilaterally cancel or revise the nuclear deal, and that Tehran will respond if its rights and interests are compromised.

Since the Iran nuclear deal is a multilateral agreement, the US is not in the position to independently decide its fate. China and Russia have expressed the wish for all signatories to continue abiding by the deal. Britain, France, and Germany expressed concern at Trump's decision in a joint statement, vowing to continue implementing the agreement. EU High Representative for Foreign Affairs and Security Policy Federica Mogherini pointed out in an interview that there is no room for renegotiating the deal at present.

In light of this, Trump's proposal to renegotiate appears unrealistic and unfeasible. Nonetheless, there are reasons he’s proposing it. First, he knows that renegotiating the deal will cause the collapse of the entire framework. Second, he promised to scrap the nuclear deal on the campaign trail. Therefore, he is appeasing his constituency whilst throwing the hot potato to Congress.

Since Trump has refused to certify that Iran has complied with the deal, Congress will have to make a decision in 60 days. Three possibilities exist:

Possibility One: Congress decides to scrap the deal and restarts sanctions against Iran. This will be disastrous. It will isolate the US internationally, galvanize North Korea’s commitment to pursuing nuclear weapons, and compromise the international community’s ongoing denuclearization efforts.

Iran will respond by re-starting its nuclear program, and other countries may also refuse to work with the US to sanction Tehran.

Possibility Two: Congress keeps the deal. Though Congress is no fan of Iran’s, many of its members have no intention of rescinding the nuclear deal. Since Democrats and Republicans have serious differences on the deal, it may well be left as it is. The US may impose sanctions in the future, but not the comprehensive sanctions it imposed before the deal was signed.

Possibility Three: If Trump thinks Congress has failed to fix the deal’s “defects”, he may invalidate it by means of a presidential executive order. Tehran will take retaliatory measures as with Possibility One, and the outcome will be equally detrimental.

There are no perfect deals in the real world; the US should focus on the Iran nuclear deal’s positive aspects. Recent developments on the Korean Peninsula have reminded people of the significance of the hard-earned Iran deal. The US side should be pragmatic, and ensure the deal is implemented in earnest, which would be in the best interests of the US, Iran, and the international community as a whole.

Iran Nuclear DealDonald TrumpUS-Iran
printTweet
You might also like
Back to Top
CHINA US Focus 2018 China-United States Exchange Foundation. All rights reserved. Disclaimer