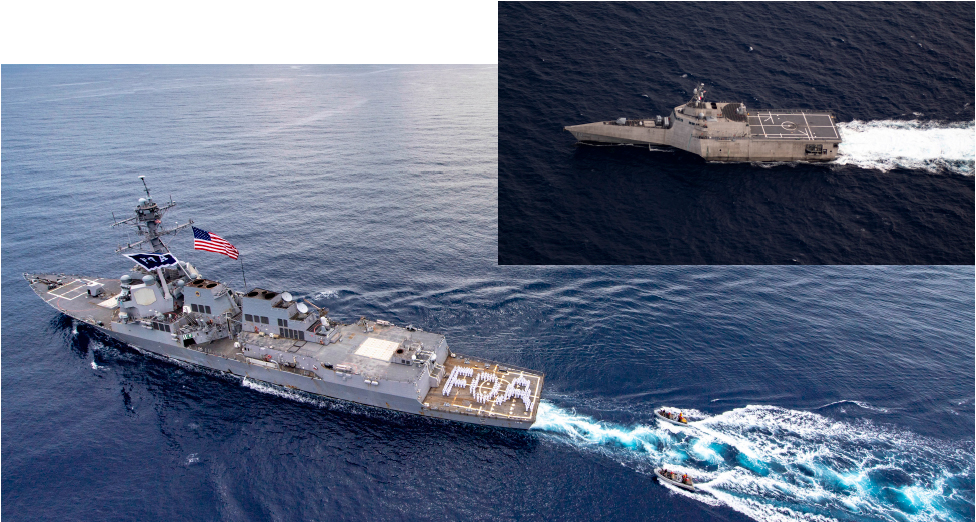 The littoral combat ship USS Gabrielle Giffords and the guided-missile destroyer USS Wayne E. Meyer conducted provocative navigation operations in South China Sea in November 2019, with the former trespassing into the sea area adjacent to the Nansha Islands (Spratly Islands) and the latter into the territorial waters of the Xisha Islands (Paracel Islands).

As part of its so-called freedom of navigation operations in the South China Sea, the United States sent the littoral combat ship USS Gabrielle Giffords and the guided-missile destroyer USS Wayne E. Meyer on Nov. 20 and 21 to sail near Mischief Reef and pass through China’s territorial waters around the Xisha Islands (Paracels), as a challenge to Chinese claims in the area. In response, China dispatched military vessels to identify and monitor the U.S. ships and warned them to leave.

Despite such carefully orchestrated operations, the U.S. Navy will find it difficult to undermine peace and stability across the region.

Since the Obama administration launched the operations in the South China Sea in 2015, the U.S. Navy has increased their frequency and scale. After President Donald Trump took office, the diversity and size of the American flotillas have increased significantly. For the first time, the U.S. sent a littoral combat ship to conduct operations in the South China Sea in open disrespect of China’s position.

The U.S. accuses China of “excessive maritime claims” in the form of “prior permission required for innocent passage of foreign military ships through territorial seas,” “excessive straight baselines” and “actions and statements that indicate a claim to a territorial sea around features not so entitled” (a reference to low-tide elevations). These accusations are based on America’s interpretation of ambiguous terms and undefined areas under the United Nations Convention on the Law of the Sea. They do not have binding force in international law, nor are they accepted by the wider international community.

To mask its feeble rehashing of familiar accusations and prevent the international community from growing bored with its excuses, the U.S. has to do everything possible to diversify the way it conducts the patrols and, in so doing, to underscore its presence in the region.

These American attempts at disruption spotlight the significance of stability for the region. In recent months, positive progress has been made in talks between China and other countries bordering the South China Sea. In late October, the China-Philippines Inter-governmental Joint Steering Committee on Cooperation on Oil and Gas Development held its first meeting, taking a substantial step forward for their joint exploitation of maritime resources. In early November, participants in the 22nd China-ASEAN leaders’ meeting expressed satisfaction with progress in consultations over the emerging Code of Conduct in the South China Sea.

Yet, at the same time, U.S. Secretary of Defense Mark Esper said in a Nov. 17 meeting with his ASEAN counterparts that China’s presence in the South China Sea poses a threat to other countries and that ASEAN should not allow it to manipulate the code of conduct. After a meeting with Philippine Defense Secretary Delfin Lorenzana on Nov. 19, Esper announced that the U.S.-Philippines Mutual Defense Treaty applies to the entire Pacific region, including the South China Sea.

Unfortunately, as the region moves toward stability and all parties concerned engage in more dialogue and cooperation, the U.S. continues to flaunt its regional military presence, ramp up its rhetoric on security commitments toward allies and talk up its theory of a China threat to the security landscape of the region.

It is obvious for all to see who works to uphold regional stability and cooperation and who attempts to sow the seeds of chaos and confrontation. The aim of U.S. freedom of navigation operations in the region is simply to disrupt the increasingly stable regional situation and drive wedges between China and its neighbors. Then it wants to see ASEAN countries respond positively to its own Indo-Pacific strategy and lead the charge as a counterbalance to its “rivals,” ultimately turning the South China Sea from a region of cooperation and friendship into one of competition and conflict.

No one wins in this zero-sum game. Cooperation is the only way forward. Peace and stability in the South China Sea region rely on the concerted efforts of the countries concerned, which are also the largest beneficiaries. They need to jump out of their Cold War mentality, reject interventions by extra-regional countries and defend their hard-won stability.

In addition, they need to enhance regional governance mechanisms on the basis of consultation on equal footing, push forward results-oriented cooperation on energy exploitation and maritime rescue and build a community of shared destiny. That is in the interest of all.

South China SeaNational SecurityRegional Security
printTweet
You might also like
Back to Top
CHINA US Focus 2021 China-United States Exchange Foundation. All rights reserved.