Civil Society Dialogue Is Key, and Should Not Be Stifled 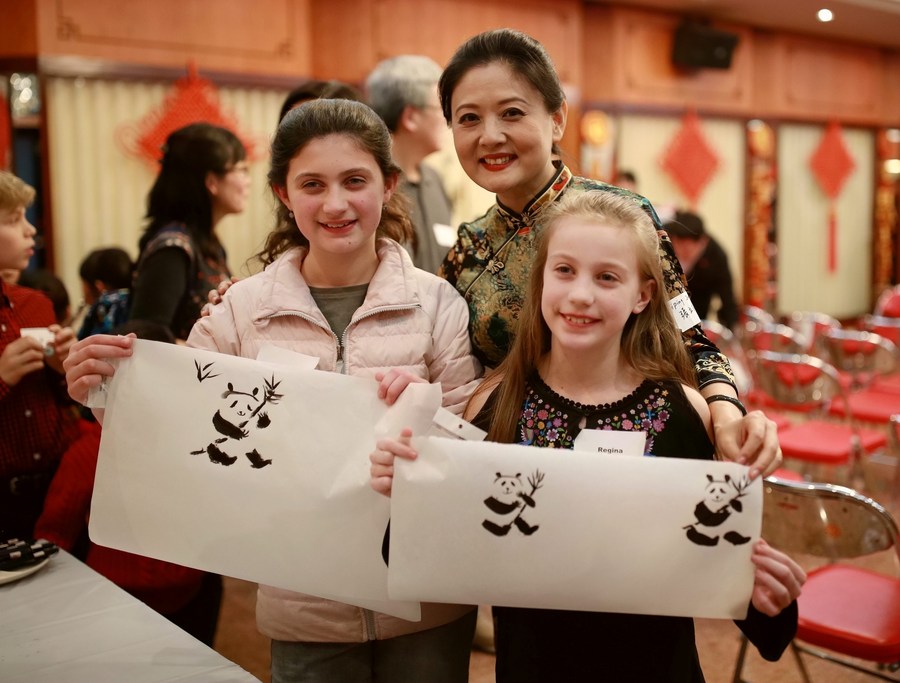 Two girls show their paintings of panda with Chinese traditional painting artist Zhang Liping (C) during the event "From China to Chicago: A Holiday Gathering & Celebration" in Chicago, the United States, on Dec.14, 2019.

At an age when great power politics seems to dominate, it is dangerously tempting to think that civil societies, civilians, and ordinary citizens of countries would have little to no role to play in shaping the dynamics of international relations. After all, evidence increasingly seems to suggest that civil societies are often directly or indirectly influenced by their respective states’ governments, as a means of scoring political goals and achieving specific ends. Civil societies’ interactions are thus not particularly civil.

Undergirding this view is an ethos indubitably sparked and affirmed by recent events – specifically, in context of Sino-American relations. In the U.S., the Department of Justice’s China Initiative, ostensibly introduced to counter “national security threats” and “espionage” from China, has left indelible marks on innocent scholars’ reputations, as they found themselves in the crossfire between Beijing and Washington. On the other hand, allegations of espionage and spying have led Beijing to impose significantly more stringent restrictions and direct public outrage towards the dwindling roster of international journalists working in the mainland. Both sides are guilty of politicising and weaponising civilians – journalists, academics, and beyond – as a means of articulating clear domestic and foreign signals, that matters of national security are not up for grabs.

The insistence on upholding national security baselines in the face of prospective challenges is understandable. Yet the paranoia associated with such insistence has manifested through a combination of targeted persecution and haranguing of individuals, vociferous accusations directed towards the other side’s civil society (where Chinese citizens, students, and academics are smeared as “brainwashed”, or where American journalists, scholars, and thinkers are portrayed de facto as “extensions of the CIA”), and actual restrictions upon travelling, visas, and exchange agreements. It’s clear this approach is neither justified nor conducive towards healthier Sino-American relations.

Civil society dialogue is key, and cannot be stifled – especially at such a critical juncture in bilateral relations. The COVID-19 pandemic has already rendered travel to China increasingly difficult, with its borders being effectively closed to all foreigners till at least early 2022. The relocation of study programmes away from Beijing in favour of alternative destinations would only compound the effects of the dwindling civil society-led exchanges between both sides of the tense relationship. Throw into the mix brewing domestic grievances towards the other. Many in the Chinese public are indignant over America’s haughty and supercilious attitudes towards China, while many Americans are increasingly mistrustful of Beijing’s intentions and ambitions (cf. Washington’s insistence on rooting out alleged cases of Chinese espionage with much unabated zeal). From this one fact emerges rather perspicuously: it is no longer possible for civilians to steer clear of Sino-American tensions.

This does not mean that we ought to give up, “lie down”, and accept the status quo as a fait accompli. Both Beijing and Washington have strong reasons to keep dialogue between civil society actors open, unfettered, forthcoming, and frank.

First, civil dialogue serves as a means of accurately assessing each other’s intentions.  Official rhetoric is often didactic and bombastic; that is part and parcel of the craft, of pleasing one’s constituents, and beyond. On the other hand, informal exchanges allow participants more leeway and flexibility, specifically with respect to laying out the facts and cutting to the chase. Red tape and bluff only obscures, rather than informs, of the truth; if the truth cannot be readily and easily accessed, the risk of conflicts – especially over flashpoints such as Taiwan, the Sino-Indian border, or the South China Sea – becomes significantly heightened. We could ill afford to have governments misreading or misjudging each other’s intentions, and this is precisely where academic advisors and affiliates to both states– who are not bound to the configurations and demands of official positions – come into play. The reduction in the number of scholarships, as well as decoupling in academic collaboration has detrimentally undermined dialogue here. If Beijing and Washington are serious about getting each other “right” (independent of further calculations or deliberations), both should take a step back in restoring channels of academic exchange and dialogue.

Second, the human touch to diplomacy is often overlooked – yet the consequences of such are precipitously clear. The confrontations between diplomats from Beijing and Washington are neither necessary nor helpful in lowering the temperature where this is helpful. More importantly, whilst previous generations of diplomats from both sides had been characterised by long-standing friendships that could be traced to the days when Chinese and American diplomats-in-training studied alongside one another in leading universities in the U.S., the same sadly could no longer be said of the present generations of envoys, ambassadors, and diplomatic representatives. Bringing back the Fulbright Program, for one, could prove useful in restoring more intimate, forthcoming, and genuine bilateral relations between contact points across both sides of the Pacific. Encouraging universities to set up exchange centers in the other country, with relatively autonomous control over curricula (i.e., not influenced by the state, with minimal censorship), would be another. There is much that can be done, to ensure that miscommunication and misrepresentation do not end up crowding out substantive, constructive solutions that can be sought. If Beijing and Washington can share a vision on the nature of bilateral relations, even if a partial deterioration is all but inevitable, there remains much that can be done to more proactively manage the worsening relations.

Finally, journalists, commentators, writers play a pivotal role in relaying information and informing the public. In China, the civilian-led harassment of foreign journalists – targeted for their ostensible anti-China sentiments – does not do the country or the ruling regime any favours. It only adds to unnecessary tensions and vitriol, as well as equipping opportunistic critics with the ammunition and “proof” that China is a belligerent and unwelcome country. Similarly, the framing of any and all writers sympathetic towards China’s view as “anti-Western” and “paid shills” under Beijing, may sell well on a tabloid – but amounts to little more than 21st century McCarthyism. If there is to be honest and forthcoming dialogue, any and all should be discussion-worthy, and up for debate. Civil society dialogues cannot occur when those who are tasked with making and engaging in constructive speech feel threatened – for they do not conform with the political “orthodoxy” or standards of ostensible political correctness.

Politicians may have a hard time finding common ground, given that they must answer to the interests of all, as opposed to the few. The encumberments and burdens that politicians possess, however, are not shared by civilian actors – it is the independence and fluidity of these stakeholders that ought to be harnessed, as opposed to eradicated, as Beijing and Washington alike search for a new modus vivendi. Keep dialogue channels open, keep the conversations going – and perhaps, then, we could see some concrete grounds for hope.