Education and a Wave of Returning Overseas Students 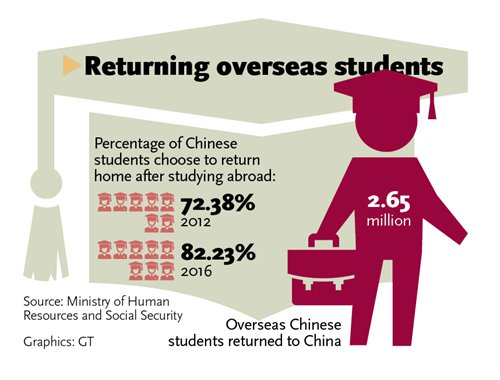 The buzzword in the Chinese media in June, when the annual college entrance exam is held, is “enrollment rate”. But there is another word often used in conjunction, which is the “employment rate”. In 2017, 10 million Chinese high school students compete fiercely for college entry. At the same time, as many as 7 million college graduates will enter the job market.

In the eyes of the Chinese government, the enrollment rate is no more important than a slightly varying figure. Yet the employment rate candidly reflects the country’s economic and social stability. Without appropriate measures to be taken, the employment of college graduates could become a problem causing big headache.

In recent years, because of the mounting downward economic pressure, the state redoubled efforts to cut production capacity, leading to the contraction and transformation of a large number of labor-intensive industries. As a result, China’s unemployment, either visible or invisible, is attracting more and more attention. The employment issue, given its urgency and sensitiveness, has received focused attention from the Chinese government. Such overall economic and social backdrop has naturally given rise to a debate on how the college in China should be run.

Some people believe that the employment rate should be the guide of college education. The setting of disciplines and the teaching of knowledge should all be oriented towards the needs of the job market. Major changes should be made to the structural layout of the Chinese colleges as well as to the subjects taught. Simply put, college education should be more results-oriented and utilitarian.

Some educators are strongly against this idea. They believe that the purpose of running colleges is not to serve the market or produce bureaucrats. A college is not a vocational training school. Its purpose is not to let the students grasp some survival techniques, simple or complex. Rather, it is first to improve students’ psychological motivation to learn more; second, to bring new blood to the social management teams at all levels of the country; and third, to turn college students into citizens that enjoy a rather high level of scientific and cultural knowledge. With college graduates facing rising difficulties to find jobs, this debate is becoming more heated and involving a larger community

Against such backdrop, the rising wave of Chinese overseas students returning home is conspicuous, if not incredible.

Education Minister Chen Baosheng told the press recently that by 2016, a total of 4.58 million Chinese students had studied in overseas colleges and educational institutions. While many people thought that these students would never come back once stepping abroad, already 3.22 million students have returned and engaged in different types of jobs, accounting for about 70% of the overseas Chinese students. Over half of them made their trip home in the past five years. Minister Chen made a positive estimate that this year the number of returning students will reach 600, 000, much larger than that of students going abroad.

You may ask why this “reverse” tide in the overseas student community is happening while students at home are not having much good luck and face difficulties in the job market.

To answer this question, one might first analyze the academic majors of the students who have already found jobs after returning. The blue paper issued by the Ministry of Education in 2016 shows that those majoring in science, administration and economics took the largest share among the returning students. For the first time, science majors overtook administration majors in domestic employment and business start-ups to become the largest grouping. There are more science and engineering majors than others among the returning PhD holders. It shows that one important factor behind the returning wave is the urgent need at home of high-caliber talents thanks to the economic upgrading in China. In other words, China in transition is not losing its vitality because of the caps on the low-end industries and overcapacities. China is still in great need of capable talents as it further develops its economy and society.

There is a saying in China that because of its vast territory, when it is dark in the east, there is light in the west; when things are dark in the south, there is still light in the north. This can be vividly applied to the employment situation in China. China’s huge economy generates vast opportunities. Its comprehensive national strength is rising. The country is gradually moving up towards the higher end of the global value chain. This provides ample room for the overseas students to perform. By making the choice to come back during the home country’s economic and social transformation, they can escape the problems of economic slowdown at the host country, and will make academic achievements in a time-saving fashion thanks to the country’s supportive policies and the employer’s financial and facility support. What is more, students may bring back home the technologies and expertise in areas such as environmental protection, medicine, life science, fashion and industrial design, which will be put into full use within China. Isn’t it a win-win outcome?

China educationoverseas student
printTweet
You might also like
Back to Top
CHINA US Focus 2023 China-United States Exchange Foundation. All rights reserved.