Focusing on the Middle Class 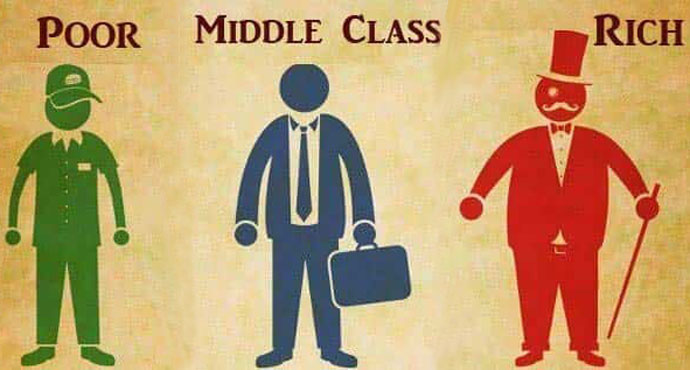 U.S.-China relations have deteriorated in recent years at a speed and scope beyond what could have been predicted. This most consequential bilateral relationship in the world is heading toward an adversarial and dangerous state. Not only has each side accused the other of being a genocidal regime and speculated that the COVID-19 pandemic was spawned from a lab leak in the other country, but the risk for military confrontation and war between both superpowers is also on the rise.

As demonization of the other grows in both countries without significant pushback, it would be naïve to believe that there is any easy way to reverse or halt this troubling trend. Ongoing dialogue on climate change and calls for cooperation between Washington and Beijing regarding the Taliban-controlled Afghanistan are welcome developments, but strong zero-sum views of the bilateral relationship will significantly undermine these efforts. In this deteriorating environment, it has become even more critical to search for a new driving force for U.S.-China engagement.

When examining the priorities of the top leaders in both the United States and China, there is one area of stark common ground: middle-class development. “Foreign policy for the Middle Class” is a centerpiece of the Joe Biden presidency. Biden’s top aides –– Secretary of State Antony Blinken, National Security Advisor Jake Sullivan, and the State Department’s Policy Planning Staff Director Salman Ahmed –– have frequently promoted this overarching objective. The Biden administration’s top four priorities –– combatting COVID-19, reviving the economy, improving racial relations, and addressing climate change –– reflect this domestic-focused approach.

Can this parallel promotion of middle-class development in both the United States and China serve as common ground for cooperation or healthy competition rather than a source of zero-sum confrontation?

Contrasting Statuses of the Middle Class in Both Countries

For the foreign policy establishment in Washington, the rapid expansion of the Chinese middle class does not inspire hope for positive change toward peace in the world or mutual benefit for both countries, but rather evokes fear that this development benefits China alone and may even undermine American supremacy and security.

Such a simplistic view that blames external actors for America’s own economic structural and distributional problems, however, is only part of the story. It is important to understand that economic globalization has affected different countries (and especially different socioeconomic groups) in drastically disparate ways. The evolution of the global economic landscape in China’s favor, as one U.S. senior official characterizes, “represents one of the largest transfers of wealth in human history.” In 1979, when China began its economic reform, the country’s GDP per capita was less than $300, accounting for about 3 percent of that of the United States. A distinct socioeconomic “middle class” was virtually nonexistent in China.

But today, a growing number of Chinese citizens (currently estimated between 400 and 500 million) enjoy a middle-class lifestyle with private property, personal automobiles, improved health care, accumulation of financial assets, and the ability to afford overseas travel and foreign education for their children. By 2019, 40 years after China began its economic reforms, national GDP had grown 60 times larger, and per-capita income was 25 times higher. GDP per capita has increased from about $1,000 in 2001 to $10,000 in 2020 and is expected to reach $30,000 by 2035.

In contrast, the middle class in the United States has gradually been shrinking—from 70 percent of the American population in the post–World War II years to 61 percent in the early 1970s, to 55 percent in 2000, and to about 50 percent today. According to the statistics provided by the World Inequality Database, between 1980 and 2014, Chinese citizens at every income percentile benefited greatly from economic globalization, but in the United States only the incomes of the top 20 percent increased significantly, while all other income groups saw little to no improvement.

Understandably, the divergent trajectory of the middle class in China and the United States has led some American leaders to demand that China play fair in business competition and not break WTO rules while the “American middle class breaks its back.” But it would be an overstatement to assume American discourse on middle class development has been mainly driven by rhetoric blaming China. Robert Reich, former Secretary of Labor, has argued that the U.S. should focus on long overdue public investments in infrastructure rather than blaming China. Senator Bernie Sanders has asserted that the United States must address the crises the country faces “in health care, housing, education, criminal justice, immigration, and so many other areas.” In his view, “the growing bipartisan push for a confrontation with China will set back those goals.”

A shared imperative for middle class development can bring unconventional thinking to help thaw an icy bilateral relationship. The following four factors highlight the importance and feasibility of this approach.

1. Developing shared identity. Given the profound differences in history, culture, economic structure, and political system between the United States and China, the middle classes in both nations are not identical in composition, worldview, and behavior. Yet, constituent members of the Chinese middle class are quite similar to their American counterparts in their appreciation of the middle-class lifestyle; desire for private property right protections; interest in global financial and economic stability; and preference for policies focused on advancing public education, environment and ecology, food and medicine safety, and government accountability and transparency.

The overemphasis on mutual differences has contributed to an “us vs them” binary and enhanced mistrust and opposition. Some of the tensions and conflicts in U.S.-China relations are arguably a result of a focus on differences. Indeed, broadening the focus to this shared identity –– and similarities –– will help humanize the other side, fostering empathy and respect for shared  interests.

2. Embracing people-to-people diplomacy. Far too often, U.S.-China relations are seen solely as state-to-state relations. But they are also people-to-people relations. An emphasis on public diplomacy can overcome monolithic thinking about the other country. Within educational exchange, for example, in 2020, prior to the COVID-19 pandemic, 34 percent (or more than 360,000) of the international students on American college campuses hailed from the People’s Republic of China.

In the four months after U.S. consulates officially began accepting student visa applications in May 2021, these consulates issued about 85,000 student visas to Chinese nationals. The continuing interest of Chinese students in coming to study in the United States reflects the cosmopolitan values of the Chinese middle class and the enduring legacy of educational and cultural exchanges between the two countries, even during great challenges.

3. Directing attention to Main Street, not just Wall Street. There has been no shortage of areas in which Washington and Beijing can explore economic cooperation. But in the American public discourse in recent years, people have tended to see doing business with China as primarily serving the interests of corporate America, not so much the American middle and working classes. Thus, there is a strong and shared incentive for both Beijing and Washington to focus on reducing the anxieties on America’s Main streets, not just Wall Street.

More specifically, Washington should start to remove certain tariffs on Chinese imports, given that they harm the economic interests of American customers and small businesses, as several dozens of U.S. business associations have claimed and as Treasury Secretary Janet Yellen has argued. As for Biden’s ambitious infrastructure plan, it would be a misstep to emphasize only competition with China and miss the tremendous need for bilateral cooperation. At the same time, Beijing should reduce regulatory barriers to American agricultural exports to China. In terms of technology, intensive competition and restrictions in the name of security will likely continue. But this should not prevent the shared middle-class interest in both countries to address legitimate concerns about monopolies.

4. Establishing a force for stability and peace. Chinese philosopher Mencius’s famous line that “Those who have property are also inclined to preserve social stability” draws a correlation between property ownership and sociopolitical sta­bility in a given society. In the contemporary era, political scientists in both the West and China explore the implications of the middle class on war and peace. As the distinguished Chinese scholar Zheng Yongnian recently argued, the future of China and the world order depends to a large extent on the continuous growth of the Chinese middle class. In his view, in any country, the middle class is often the force for peace.

Interestingly, the 2020 report Making U.S. Foreign Policy Work Better for the Middle Class, to which both Jake Sullivan and Salman Ahmed served as co-authors, stated that initiating a Cold War-like approach against China at the risk of confrontation does not benefit American public interest. The recent hasty withdrawal of American troops from Afghanistan has widely been interpreted to be part of a larger strategic shift aimed at refocusing on China, but the other incentive to reallocate resources for domestic economic development in the interest of the American middle class should not be overlooked. Presidents Trump and Biden both used this reorientation to domestic economic priorities to justify their push to end the war in Afghanistan.

A conventional view in the United States and elsewhere is that the remarkable growth of China’s middle class is at least partially attributable to their taking advantage of the openness of the American economy. This valid view can also be interpreted, as renown Singaporean scholar Kishore Mahbubani has insightfully pointed out, to mean that Chinese people “see American prosperity as an asset that has helped and will continue to help propel the Chinese economy to prosperity.”

A key question is whether, amid the increasingly contentious bilateral relationship, the world’s two largest middle-class nations can abandon a zero-sum mindset and work together to find common ground and attain shared aspirations. How this question is answered will have profound implications for the 1.7 billion people in both countries – as well as the international community at large.

China’s EconomyU.S. Economy
printTweet
You might also like
Back to Top
CHINA US Focus 2021 China-United States Exchange Foundation. All rights reserved.