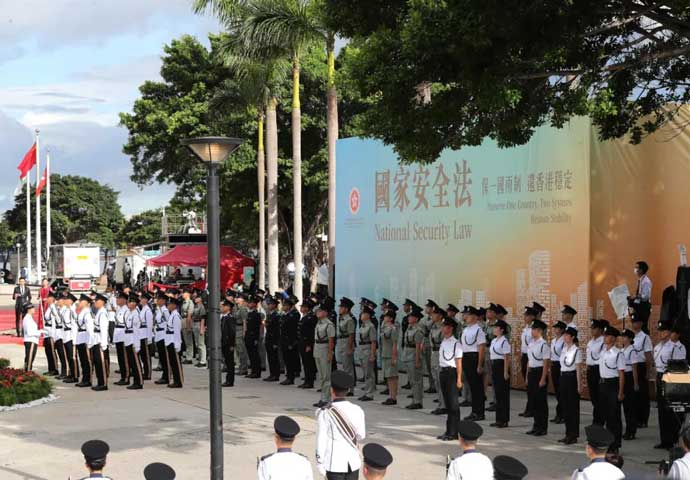 The Law of the People’s Republic of China on Safeguarding National Security in the Hong Kong Special Administrative Region was passed on June 30 after going through all the legal procedures of the National People’s Congress and its Standing Committee.

The law was immediately published by the government of the Hong Kong SAR in accordance with the law and entered into force.

This law is sovereign legislation enacted by the Chinese government on matters of national security, which are the responsibility of the central government, in accordance with the Constitution of China and the Basic Law of Hong Kong. It is fully based on the Constitution and legally supported by it.

This law is also a concrete institutionalization of the sovereign powers of the country within the framework of “one country, two systems” and takes full account of, respects and reflects the differences between the two systems. It incorporates the relevant principles and mechanisms of the common law of Hong Kong into its legal framework and empowers Hong Kong authorities to exercise their right to full jurisdiction of the vast majority of national security cases. The central government office in Hong Kong retains direct jurisdiction in special circumstances in accordance with the law, and administers those cases in accordance with China’s existing criminal procedures.

The national security legislation under the “one country, two systems” model has a legal basis and special features in terms of legal operation:

In addition, under the framework of “one country, two systems,” the state, through the Basic Law of Hong Kong, has delegated to the SAR the power to legislate on certain matters relating to national security. The nature of this delegation needs to be precisely understood — i.e. the delegation does not result in the loss of the central government’s power to legislate on national security, nor does it change the constitutional attribute that national security is the prerogative of the central government. Moreover, the authority delegated to the HKSAR government has all the attributes of constitutional obligation and responsibility.

The legal basis of the law is sound, and the legislative process was proper and democratic.

First, “one country, two systems” is a policy derived from the state’s constitutional conception and decision to resolve the Hong Kong, Macao, and Taiwan questions peacefully. Based on the SAR provision of Article 31 of the 1982 Constitution, the policy is embodied in the Basic Law of Hong Kong. This time, the national security legislation is a legitimate institutional construction based on the Constitution and the Basic Law.

Second, the new national security legislation uses the “NPC decision plus specific legislation” approach, which gives the law authoritative legal force. In the legislative process, attention was paid to collecting, listening to and absorbing the views of the deputies to the NPC, members of the National Committee of the Chinese People’s Political Consultative Conference, the legal profession, professional bodies and civic groups in Hong Kong. All this rendered the legislation proper and democratic.

The Law on Safeguarding National Security Law in Hong Kong is a special piece of national legislation that was “time-sensitive and urgent.” The central government mobilized a lot of legislative resources to conduct a comprehensive, in-depth comparative study and drew on the experience of national security legislation in many countries around the world, including the United States.

With adequate preliminary legislative preparation and a proper and the democratic due process of legislation, the central government completed its rational legislation to regulate and protect the national security of Hong Kong, as well as the rights and freedoms of its residents.

In terms of the specific legal framework, this law effectively reflects Hong Kong’s standards on human rights and the rule of law.

First, drawing on and incorporating the International Covenant on Civil and Political Rights and the International Covenant on Economic, Social and Cultural Rights, which are applicable in Hong Kong, this law achieves an institutional balance between safeguarding national security and protecting human rights and is in line with the international human rights standards usually followed in national security legislation in various countries.

Second, national security legislation sets out internationally accepted rule of law principles of criminal law and procedure, including nulla poena sine lege (no punishment unless an act is prohibited by law) and ne bis in dem (double jeopardy). It also confirms compliance in Hong Kong’s domestic jurisdiction with legal principles and procedures already in place.

This is unlike the practices in countries such as the United States, which concentrate jurisdiction of national security cases in federal or central institutions, and reflects China’s high respect for and confidence in the “one country, two systems” model, as well as in the common law practices of Hong Kong.

Fourth, law enforcement and the jurisdiction of central government agencies in Hong Kong are strictly limited and restricted by laws including the Law on Safeguarding National Security in Hong Kong and the Supervision Law of the People’s Republic of China. The agency must observe the laws of Hong Kong as a statutory law enforcement agency with no privileges beyond the law.

Fifth, the Law on Safeguarding National Security in Hong Kong provides for special authorizations, immunities and facilities for the central government office in Hong Kong, local law enforcement authorities and judicial officers in the performance of their duties, which are common in the national security laws of Western countries and are determined by the special characteristics of national security law enforcement.

Sixth, after more than 40 years of development of the rule of law, beginning with reform and opening-up, the legislative system and judicial systems of the Chinese mainland have made significant progress, and the level of protection of the rule of law and human rights has been progressively raised. The legislative and jurisdictional systems of the Law on Safeguarding National Security in Hong Kong embody these progressive features and are understood and recognized by Hong Kong and the international community.

Regrettably, misunderstanding the legal nature of “one country, two systems” and the legitimate legislative power enjoyed by the Chinese government, the United States and other Western countries are now interfering with China’s internal legislative affairs by way of the illegal long-arm jurisdiction, undermining Hong Kong’s autonomy and financial stability by means of escalating sanctions. The United States’ sanctions have no international legal basis and undermine its own interests in Hong Kong and the moral responsibility of the United States as the protector of the system of globalization.

Based on a misunderstanding of the nature of the law and an incorrect assessment, the U.S. sanctions have been exposed as an extreme decoupling move of the Cold War hawks, which is detrimental to the interests of the United States. Its trade surplus with Hong Kong is affected, as well as the security of U.S. companies headquartered in the SAR and their enormous business interests with the mainland market. In addition, the deepening of negotiations over China-U.S. trade agreements, the implementation of agreements already made and the overall risk management of China-U.S. relations are also part of the mix.

China developed the new law within the boundaries of its own sovereignty and with a view toward protecting the “one country, two systems” model from Cold War-style, populist sabotage by local extremists and external interventionist forces, thereby ensuring that Hong Kong remains the best platform for mutual openness and economic cooperation with the world.

Such well-intentioned and responsible legislation, which is based on peaceful development occupies the legal and moral high ground and will gradually gain the support of both the Hong Kong and international communities.

The United States, with its long-arm jurisdiction and unilateral sanctions, is returning to the Cold War cliches to the detriment of others and itself. It is acting against the principles of the international rule of law and globalization and will therefore not succeed. This will only have the pernicious effect of being destructive to globalization and damaging to America’s long-term strategic and commercial interests.

National SecurityHong Kong
printTweet
You might also like
Back to Top
CHINA US Focus 2022 China-United States Exchange Foundation. All rights reserved.