Here in China, we have a saying that personality traits observed in childhood are a strong predictor of adult behaviors. Be they men in the street or players on the political arena, people are determined by their experiences and living and working environments, especially those in their early adulthood. These days, many people and governments in the world are busy predicting, evaluating and speculating on the administrative philosophies and foreign policies that may be adopted by the new Chinese leadership. Will they come up with an accurate and authentic result? Yes, if they follow the most useful and simplest method: a thorough study of the experiences of the seven Politburo Standing Committee members that make up the leading nucleus of the Communist Party of China (CPC). 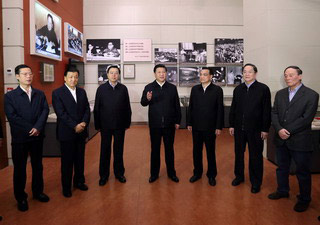 Roughly speaking, all seven new leaders experienced 10 chaotic years known as the Cultural Revolution engineered by Mao Zedong in the 1960s and the following three-decade drive of reform and opening-up initiated by Deng Xiaoping. Having served at different leading posts during those years of historical transition and high-speed economic growth, these leaders have toughened themselves as officials and gained rich administrative experiences. Also, some of these new leaders and other members in the CPC Political Bureau are from parents who held high-ranking central government posts or served as local government leaders during the reign of Mao Zedong and Deng Xiaoping, a background that has left a profound impact on their values as officials and given them an extraordinary political vision.

When meeting reporters after being elected as the General Secretary of the CPC Central Committee, Xi Jinping said that it was the expectation of all people that their children would grow up in a better environment, get better jobs, and enjoy a better life. ‘What our people yearn for will precisely be what we will strive to achieve,’ Xi pledged. Revealing the care and concern of the new leader and his comrades in the Political Bureau, this promise immediately won loud applause. In other words, it is their experience working in the countryside – the lowest social stratum – more than 40 years ago that has brought them to gain a deep understanding of the living conditions and most fundamental needs of the broad masses of people living at the bottom of society. ‘To carry a 15-20-kilogram load and walk for about 5 kilometers was a trifle routine for me in those days,’ Xi told the reporters, an experience shared by almost all other members of the new leadership. It is only natural, therefore, that these new leaders will pay greater attention to the livelihood of their people and, in particular, highlight the well-being of the disadvantaged and poor in their work agenda.

Another element characterizing this new leadership is their more than 10 years of varied experience in business and government. For example, most of the seven Politburo Standing Committee members have worked in East China, and some have held key positions in the most developed first-tier provinces or municipalities. After years of frontline struggles, these leaders can easily determine the advantages and disadvantages of existing systems, accurately pinpoint the cruxes that block economic restructuring, remove the poor climate that smothers the growth of talent, and solve the inaction that prevails in some government departments.

Serving at high-level positions has also provided an opportunity to develop broader contacts. These new leaders have extensive contacts in Hong Kong, Macao and Taiwan, as well as numerous developed, developing and underdeveloped regions and countries due to their work to build up local economic strength, woo more outside investment, or promote diplomatic and economic exchanges. As a result, the outside world is not so distant or strange compared to the older-generation of CPC leadership that remained estranged from the outside world due to the abnormal international situation shaped by the Cold War.

Interestingly, the acknowledgement of a mosaic culture by the new CPC leadership is an attitude that has been shaped by their knowledge structure, educational background, as well as personal life and love stories. In a lecture at the Party School of the CPC Central Committee, Xi called on the students (all high-ranking Party officials) to study world history. Therefore, it is not a secret that Xi’s wife is a celebrated singer who has performed on tours to many different countries and regions. Meanwhile, Li Keqiang puts great emphasis on foreign language study because his wife is a well-established translator.

Given the above, we have every reason to believe that the new CPC leaders will become all the more flexible, liberal, and open-minded in terms of administrative philosophies.

Qin Xiaoying, is a Research Scholar with the China Foundation for International and Strategic Studies

China’s Leadership CPC Xi Jinpinging
printTweet
You might also like
Back to Top
CHINA US Focus 2020 China-United States Exchange Foundation. All rights reserved.