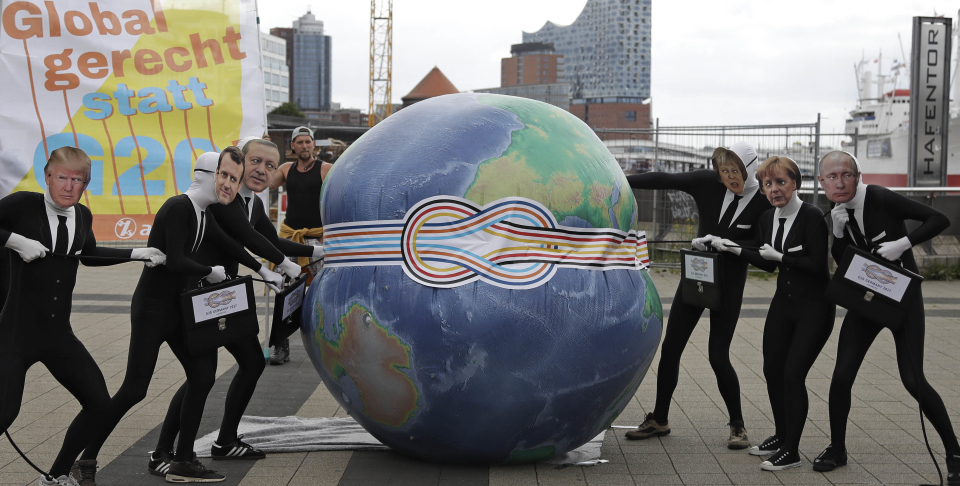 We are now living in a seemingly rudderless world full of uncertainty as globalization and de-globalization rub fiercely and uncomfortably elbow to elbow. As a result, the paradigm of global governance began a momentous yet bifurcated shift, posing difficulties for countries large or small to adapt. Yet deep understanding of and timely adaptation to this shift is necessary for countries individually and collectively.

The paradigm of the global governance framework has been shifting nowadays in two directions with quickening paces.

The first shift is led by the United States and a few other Western countries, riding the rising tides of de-globalization and populism, to blame all troubles on clashes of civilizations and globalization. They seek solutions through “America First” or “Me/Us First” in order to gain more benefits in their dealings with other countries and at the same time avoid the responsibility of their governments to maintain the right balance between market efficiency and social equality and justice. It is really illustrative to quote the rhetorical question asked by President Trump in his recent Warsaw speech: “Do we have the desire and the courage to preserve our civilization in the face of those who would subvert and destroy it?”

Other senior American officials are less subtle, saying “the world is not a ‘global community’ but an arena where nations, non-governmental actors and businesses engage and compete for advantage.” The failure at recent G20 summit in Germany to reach consensus on climate change and anti-protectionism is an example with a clear American footprint. Former US Treasury Secretary Lawrence Summers wisely commented in FT that “the existence of the G20 as an annual forum arose from a common belief of major nations that there was a global community with common interests in peace, mutual security, prosperity and economic integration and the containment of threats even as there was competition between nations in the security and economic realms”. Many US scholars are finding out that among American young people there are two schools of thought in the face of globalization and what America’s role should be with “me-first” versus “community first”. Of course the latter does not negate “me” as an individual.

Here one can discern clearly a harmful mentality by the US administration to pit the consciousness of being in the same community of nations against the “evil” of clashes of civilizations. President Trump rejected the concept of global community since the start of his presidential campaign and carries that on in the White House. The choice of working alone trying to seek better deals bilaterally or trying to build a stronger and better international system and global governance architecture is an ongoing fight within the US Government. The former seems to be winning for the time being.

The other shift moves onto the world stage with China leading the way, echoed by many countries both advanced and developing. The clarion call early this year at World Economic Forum annual meeting at Davos was made by President Xi Jinping of China, appealing to the world to build “the community of nations with shared destiny”.

With the widening gap between poor and rich, both within a country and among countries, as well as a growing host of challenges faced by the international community that defy repeated efforts to defeat them, the old paradigm of global governance seems inadequate in dealing with them, including climate change and rising protectionism coming one on the heel of another.

The lofty ideal of building “the community of nations with shared destiny” put forward by China is nothing less than a call for concerted action to transcend and overcome ideological and other differences. The goal is to achieve a “meeting of minds and hands” in creating a world order wherein countries with their different civilizations and cultures can cooperate and compete peacefully for the shared destiny of a better future for all.

The “Belt and Road” Initiative proposed by President Xi in 2013 dovetails perfectly with the ideal of building the “community of nations with shared destiny”. Both are based on the success of China in domestic governance and fast economic growth, not something out of blue or a “castle in the air” as a Chinese saying goes. Thus the “Belt & Road” Initiative has gained much traction with the Asia Infrastructure Investment Bank, Silk Road Fund and New Developmental Bank of BRICS as complementary vehicles for raising capital for large infrastructure projects sorely needed, especially by less developed countries that lag behind the fast pace of globalization and industrialization. The “Belt & Road” International Cooperation Summit Forum held in Beijing last May attracted a great deal of attention from around the world, showcasing the anticipation of many nations to engage in this innovative effort at global governance and new form of international cooperation, making globalization “of the people, by the people and for the people”, not merely a playing ground for a few countries and vested interests groups. Again it is timely to reiterate the wise comment from the G20 Communiqué of 2009 that “we start from the belief that prosperity is indivisible”. We should by no means detract from that belief of “shared prosperity” and “shared destiny”.

Coming back to the bifurcated paradigm shift, it is something the world needs to take seriously. The paradigm shift is unstoppable because the world has been changing on a tremendous scale with increasing convergence of power between “West and East” and “North and South”, as political pundits are fond of saying. The key issue is what is good for the international community as a whole in this ever-connected and more interdependent world, more clashes both within civilization and between civilizations or coming together to tackle global challenges no individual country is able to cope with single-handedly, thus paving the way towards building the “community of nations with shared destiny”.

Blaming everything on globalization and so-called clashes of civilizations is backpedaling to divide nations into ideological “camps” as was seen during Cold War era, certainly not an appropriate proposal for the new era of globalization which has already bound all countries into a close-knit “community of shared interests”, whether one admits it or not. The comment made by an American scholar at a seminar I attended the other day was relevant to this point. He described today’s world as a series of “rings of communities” within one another from local community one lives in to the global community we share. Of course there are many rings between the two. Sharing and connectivity is the key link and the conclusion he gave was “not to leave anyone behind” because we were all in the same world.

Shared interests, shared destiny and “one world one dream”, as was loudly pronounced during Beijing Olympics, is the essence of this ongoing lofty ideal of China to build the “community of nations with shared destiny” with all nations in the world.

Global GovernanceG20Globalization
printTweet
You might also like
Back to Top
CHINA US Focus 2022 China-United States Exchange Foundation. All rights reserved.