Where is China Headed? 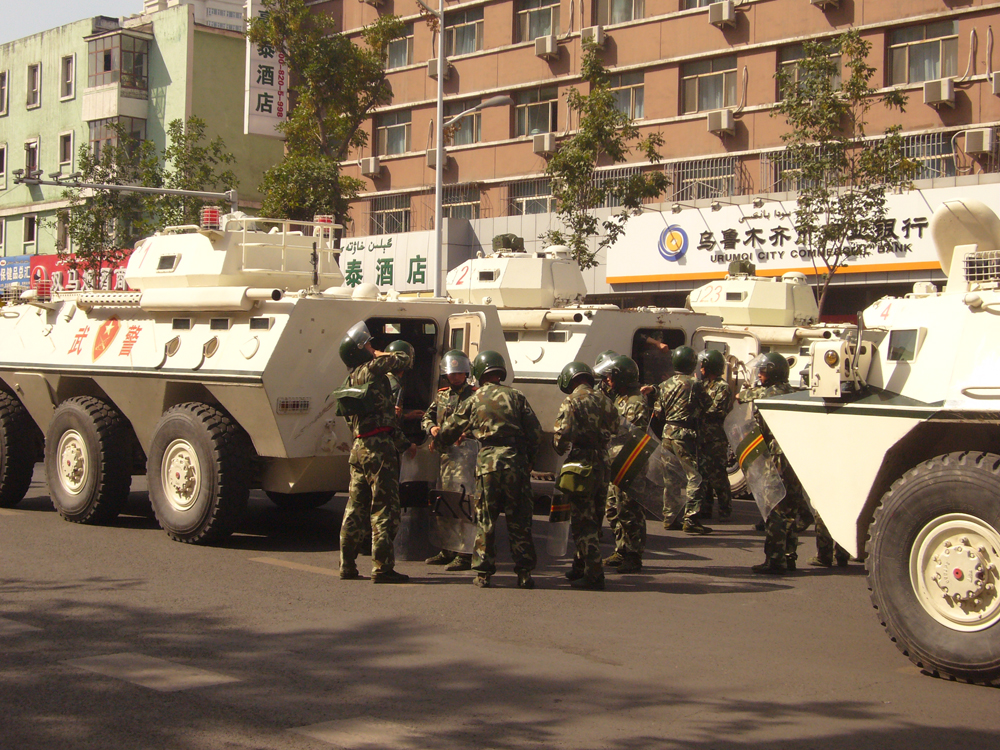 Soldiers and armored vehicles in the street of Urumqi, Xinjiang (Picture Credit: Andrew An)

In the year marking the 70th anniversary of its founding, the People’s Republic of China appears to have entered a new era of uncertainty after experiencing more than a quarter century of phenomenal economic growth. China’s slowing economy, an international geopolitical pushback against Beijing’s ambitious goals, new trade disruptions and tariffs, and President Xi Jinping’s centralization of power have all created a jittery mood among the country’s elites.

This year also marks the 30th anniversary of the Tiananmen Incident, in which at least 10,000 pro-democracy demonstrators were killed in the tank and machine-gun assault at Beijing’s Tiananmen Square.

Today, China is the world’s largest, strongest, and longest-surviving autocracy. The Tiananmen Incident happened because the Communist Party never abandoned its heavy reliance on raw power since the blood-soaked Mao Zedong era, during which tens of millions of Chinese died in the Great Leap Forward, Cultural Revolution, and other state-induced disasters.

Paradoxically, China today is increasingly oriented to the primacy of a party responsible for pogroms and witch-hunts in the past, and continuing excesses now. Under Xi, the party has set out to deconstruct Muslim, Tibetan, and Mongol identities, expand China’s frontiers far out into international waters, and turn the country into a digital totalitarian state.

The Soviet Communist Party that ran gulags was consigned to the dustbin of history. But now the Chinese Communist Party has set up gulags that are far more high-tech and indiscriminate, with Islam as the target. China’s concentration camps holding more than a million Muslims are designed to deprogram Muslim identities and change the outlook of entire communities — a mission of unparalleled scale.

Meanwhile, by China’s own statistics, last year its economy registered the weakest pace of growth in nearly three decades. Add to the picture a new phenomenon — the flight of capital from a country that, between 1994 and 2014, amassed a mounting pile of foreign-exchange reserves by enjoying a surplus in its overall balance of payments.

Now faced with an unstoppable trend of net capital outflows, Xi’s government has tightened exchange controls and other capital restrictions to prop up the country’s fragile financial system and its sagging currency. The regime has used tens of billions of dollars in recent months alone to bolster the yuan’s international value.

Not only is capital fleeing China, but even wealthy Chinese are choosing to live overseas. In a vote of no confidence in the Chinese system, more than a third of surveyed millionaires in China said they were “currently considering” migrating to another country. An earlier report found that almost two-thirds of rich Chinese were either emigrating or have plans to do so.

China’s internal challenges are being compounded by new external factors. Chinese belligerence and propaganda, for example, have spawned a growing international image problem for the country.

More significantly, China has come under international pressure on several fronts — from its trade, investment, and lending policies to its human-rights record, including its incarceration of Muslims from Xinjiang, a sprawling territory Mao annexed in 1949. Such pressure suggests that China’s free ride, which helped propel its rise, is ending.

U.S.-led pressure on trade and geopolitical fronts has accentuated Beijing’s dilemmas and fueled uncertainty in China. As long as the U.S.-China trade war rages, the flight of capital will remain a problem for Beijing. Its foreign-exchange reserves have shrunk by about $1 trillion from their peak of just over $4 trillion in mid-2014.

At a time when China’s imperial project, the Belt and Road Initiative, is running into resistance from a growing number of partner countries, Beijing is also confronting international pushback against its telecommunications giant, Huawei. In fact, the pushback has broadened from opposition to Huawei’s participation in next-generation 5G wireless networks to a broader effort in Europe, North America, and Australia to restrict the use of Chinese technology over concerns that it is being used for espionage.

Meanwhile, China is alienating other Asian nations by throwing its weight around too aggressively. This trend is likely to accelerate with the restructured People’s Liberation Army becoming less of an army and more of a power projection force.

Indeed, the PLA’s shift away from being a defensive force foreshadows a more aggressive Chinese military approach of the kind already witnessed in the South China Sea, where China has fundamentally changed the status quo in its favor.

The Dalai Lama recently said that, due to Chinese pressure, no Buddhist country, with the sole exception of the nominally Buddhist Japan, is now willing to grant entry to the spiritual leader of Tibetan Buddhism. When China pressures smaller nations to cave in on any issue, it only fuels greater resentment against it.

More fundamentally, it is China’s open disregard of international rules and its penchant for bullying that explains why it remains a largely friendless power. It lacks any real strategic allies. Leadership in today’s world demands more than just might.

Looking ahead, Xi’s primary focus will likely remain on ensuring stability at home. Without stability, neither he nor the party can remain in power.

To calm the economic turbulence, China’s central bank has substantially increased domestic credit to offset capital outflows and to help boost consumption and investment at home. The geopolitical pushback, for its part, could force Xi to return to Deng’s “hide your capacities, bide your time” strategy. But such a return can scarcely obscure China’s overweening ambitions after being laid bare by Xi.

Make no mistake: Four decades after it initiated economic reform, China finds itself at a crossroads, with its future trajectory uncertain. Deng’s decision not to truly liberalize China has imposed enduring costs on the country, which today faces difficult choices.

XinjiangXi JinpingChina’s Rise
printTweet
You might also like
Back to Top
CHINA US Focus 2021 China-United States Exchange Foundation. All rights reserved.