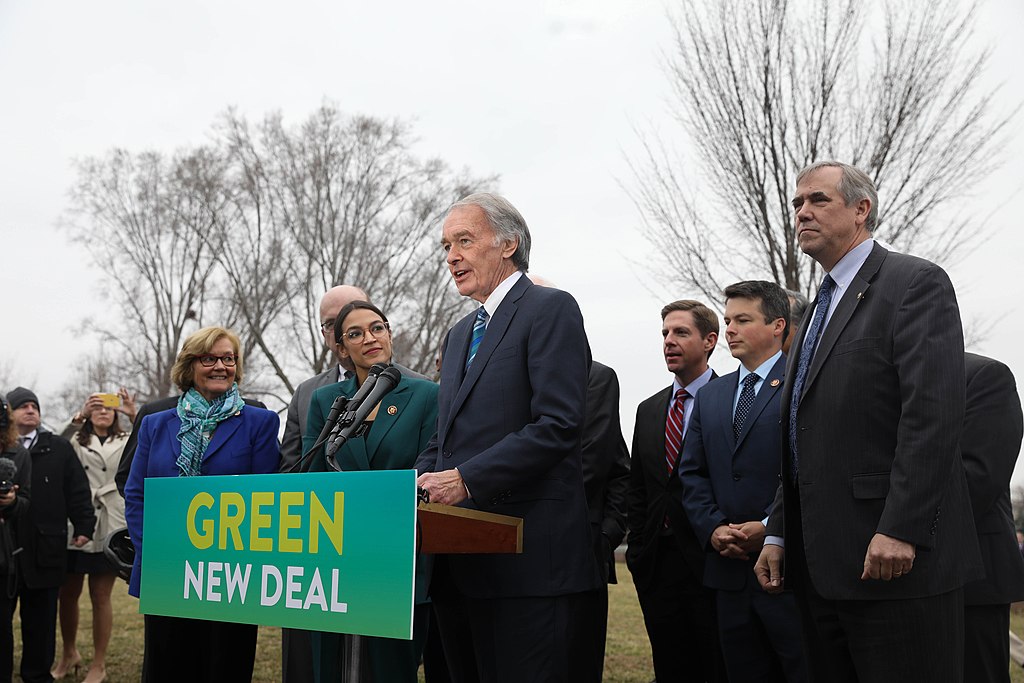 Talk of a Green New Deal, the newest policy debate in Washington that grapples with how to holistically address climate change, is turning a once vague discussion of how to lower emissions into a concrete list of changes that need to be made to save the world. Experts agree that necessary steps should include a pricing mechanism for carbon emissions and a rapid transition to renewable energy, which would leave both coal and natural gas behind. Perhaps even more challenging would be retrofitting existing buildings to be more energy efficient, and developing viable carbon-capture technology to begin to remove excess emissions from the atmosphere. This to-do list does not even include the adaptation measures necessary to reduce the impacts from extreme weather, rising sea levels, and unanticipated climate disasters. The question remains, however, how to fund this global shift; according to the Sustainable Banking Network, $70 trillion in investments will be needed by 2030 to meet global climate targets and the UN’s Sustainable Development Goals. To meet that unprecedented need, green finance is prioritizing sustainable, profitable investments — it is quickly gaining traction, particularly in China.

It is difficult to overstate the opportunity cost of failing to transition to a low-carbon economy, but estimates suggest that leaving climate change unabated would cost the world $43 trillion. Even setting aside the inherent loss from species extinction and irreversible environmental changes, the economic consequences of a-business-as-usual scenario would be crippling, and they are constantly being revised upwards. The need for major economic changes also presents an opportunity, however: the Global Commission on the Economy and Climate estimates that it is possible to expand the global economy by $26 trillion while addressing climate change.

On the ground, there are a variety of tools being deployed to develop green finance. One is green banks, institutions that devote themselves to only investing in certifiably environmentally-friendly endeavors. Though they have a variety of mandates and structures, they are primarily concerned with facilitating private capital investments by creating innovative transaction structures and mitigating risk. This is particularly important because multilateral development banks like the World Bank have traditionally led the way in environmentally-friendly investments, but attracting private capital is essential to funding a critical mass of green endeavors. Green banks prove that these transactions can be profitable and less risky than traditional energy infrastructure or other assets that are vulnerable to being stranded in a changing market.

Green bonds follow a similar model for specific climate-friendly projects. Designed the same way as traditional bonds, they fund green projects like renewable energy installations or public transportation. There are a variety of ratings for green bonds based on the percent of the bond used for low-carbon investments and the content of those projects.

Green credit is a third concept underpinning green finance. Investments and institutions are ranked on their sustainability as an important metric for potential lenders. Not only does this promote greater environmental awareness, but it lines up with good investments. Green credit incorporates the environmental risks from investing in fossil fuels, for example, while rewarding forward-thinking mitigation efforts. This is both key to incentivizing climate action and makes financial sense. Renewable energy is rapidly falling in cost compared to coal, and the externalities associated with traditional energy or transportation are too significant to be ignored.

China has been on the cutting edge of green finance since it issued its Green Credit Guidelines in 2012, and by the end of 2017 ¥8.22 trillion had already been invested in the green finance sector. In 2016 China published its Guidelines for Establishing the Green Financial System and hosted the G20 summit, where world leaders agreed to promote green finance. China’s market is far ahead of green finance in the US, and while the European Union is currently undergoing a process to define and regulate green finance, they are using China as a model.

However, crucial questions remain for Chinese green finance efforts. Defining what counts as “green” is a major undertaking, and China’s definitions tend to be more lenient than European ones. For example, counting “clean coal” as a green investment while many in the environmental community scorn that label as an oxymoron delays the transition away from fossil fuels. For green finance to truly go global, it must encompass emerging markets that will determine the world’s course on emissions over the next decades. To that end, uniform standards are crucial.

China’s embrace of green finance also begs the question of the nation’s Belt and Road investments, many of which are more “brown” than “green.” According to a report from the World Resources Institute and Boston University, Chinese policy banks have focused their investments on fossil fuels and traditional transportation, partly in an effort to prop up these dying industries. Between 2001 and 2016, China was involved in 240 coal projects abroad, even as officials hasten to lower China’s domestic coal consumption. China has come under heavy criticism for tying much of the developing world to polluting, inefficient energy sources and making the climate fight that much harder.

Green finance has a big investment gap to fill, but it is just that: investment. Continuing with business-as-usual is akin to throwing money down the drain, but addressing climate change with smart, profitable investments provides an incredibly opportunity. China is leading the way in showing how this can work, and while there are major problems to resolve, it is time for the world to follow.

Green EconomyChina EnvironmentBelt and Road
printTweet
You might also like
Back to Top
CHINA US Focus 2022 China-United States Exchange Foundation. All rights reserved.