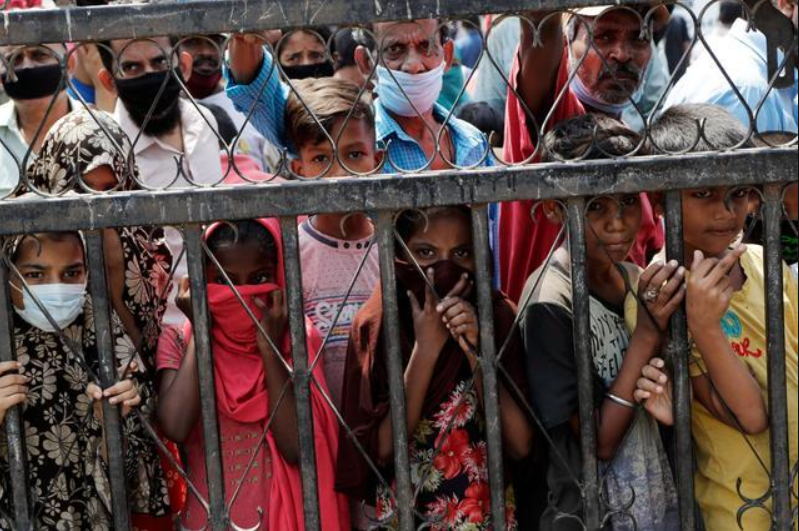 As June approaches, India is reeling from a massive wave of COVID-19 infections that has made it the epicenter of today’s pandemic. The situation resembles that which has faced a number of nations in the one-and-a-half-year course of the pandemic: soaring cases and deaths, a growing shortage of vital healthcare equipment, governmental incompetence and political ineptitude, and a daily struggle by ordinary people to persist in the face of catastrophe. Although this wave of infections appears to be subsiding, it is clear that a lack of vaccinations makes a renewed wave all but inevitable without serious further investment. This should give the entire Asian region and the rest of the world pause. Not only has India become a new source of exported cases, but runaway infections in the country could increase the odds of mutations that decrease the efficacy of the world’s vaccine defenses.

The latest wave in India began in March of this year. With the decline of 2020’s wave of COVID-19 infections, many people in India began to ease up their precautions. As infections climbed in March, a new variant emerged, which may have contributed to the increased spread. By April, it had become clear that the virus was spreading out of control throughout much of the country. Despite this, the BJP-led central government was incredibly slow in its response, fearing the economic fallout of yet another round of lockdowns. Emergency measures were delayed, critical views were suppressed, and an air of official optimism was broadcast until it was too late to effectively contain the virus. By the time the BJP government acknowledged the severity of the situation, hospitals were overwhelmed and the country faced a severe shortage of critical medical supplies. By now, the reader may recognize an eerie similarity with every other botched pandemic response, including those of the U.S. and Brazil.

The present situation in India is so dire in large part due to an underdeveloped healthcare infrastructure, particularly in rural areas, being required to serve a large population. India spends a tiny percentage of its GDP on its public healthcare system, a staggeringly low 1% annually as compared to China’s 5.3% or South Africa’s 8.1%. At the same time, poor workers have to choose between abiding by social distancing requirements and earning money to afford the bare essentials of life. As of the end of May 2021, the Indian government is reportedly planning an economic stimulus package for hard-hit sectors, but there is little talk of renewed aid for the poorest citizens. Unsurprisingly, India’s underfunded hospitals and public health system mean that most cases and deaths are not being officially recorded. New estimates suggest that as much as half of the population may have already been infected with the virus, and that the true death toll may reach into the millions.

However, not every state in India has suffered equally. Kerala, which is governed by the Communist Party of India-led Left Democratic Front, has employed much more robust systems for coordinating treatment and providing care to its citizens. Due to its long-term investments in healthcare infrastructure, the state has five times the hospital beds of the overall Indian average. As a result, there have been fewer deaths and Kerala has been able to track the emergence of new virus variants, providing crucial data for India and the world. It’s not all roses, and the pandemic is still quite serious in the state. Nevertheless, by examining the difference in outcomes produced by different governing choices, we can see that India’s current catastrophe is not the product of an uncontrollable natural disaster, but of many years of deliberate neglect, underinvestment, and corruption.

An out-of-control pandemic in India poses serious risks not just to the Asian region, but to the rest of the world as well. The first and most obvious risk is that India is exporting cases to its regional partners, particularly as migrant workers flee to their homes in Nepal and Bangladesh, spurring renewed outbreaks in those countries. The more dire long-term risk is posed by COVID-19’s uncontrolled spread creating a massive pool of opportunities for the virus to mutate, which could enhance its ability to spread or its virulence. Simply put, the more hosts a virus can infect, the more chances it has to evolve. The outbreak in India is increasing the odds that new variants may emerge that could lower the efficacy of the world’s existing vaccines. In the worst-case scenario, the emergence of a vaccine-resistant strain could require another wave of global lockdowns and a new race to produce defenses tailored to that strain. This is particularly troublesome in India, where most states simply cannot track the emergence of new variants as the vast majority of infections and deaths occur outside the hospital system. We have had more than enough trouble with COVID-19; the world cannot afford a COVID-21.

India is still desperately lagging in its vaccination campaign, with only 3% of the population fully inoculated. There is a certain irony here, given that India is a major global exporter of vaccines. Despite the obvious lack of local infrastructure, government restrictions continue to hamper the world’s ability to provide needed aid to the Indian people. Much greater foreign aid is required, and providing this aid is not just a matter of humanitarian concern, but of direct self-interest. It is crucial that the virus be brought under control in India, and this requires everything from massive inflows of medical equipment to funding and personnel for a comprehensive vaccination campaign in a country of 1.3 billion people. Failing to do this will expose the entire world to major risks for years to come.

Here, the U.S. and China can be of great assistance by using their diplomatic leverage to pressure the Indian government to allow more medical aid into the country, and in providing much-needed supplies and funding. While India is unlikely to need much help producing vaccines in large quantities, it could certainly benefit from extensive logistical support in rolling out those vaccines to its underserved rural population. Both China and the U.S. have the resources and experience to provide this support, particularly as both countries are now reaching much higher vaccination rates within their own borders. Similarly, the provision of critical medical supplies like hospital beds and ventilators (of which both China and the U.S. are major global manufacturers) would be extremely valuable in easing the pressure on treatment facilities in India. Some in China and the U.S. might raise eyebrows at the idea of sending large amounts of aid abroad while the pandemic remains a real threat domestically. However, these programs have to be understood as an investment in global public health, not as charity.

Though official numbers suggest a small decline in India’s infections, we should learn from last year’s waves in other countries where COVID-19 spread uncontrolled. Without major vaccination efforts and public health investments, renewed outbreaks are all-but-inevitable. Asia and the world cannot afford to leave India stranded in its moment of need. Lest we risk an untimely extension to our shared nightmare, let’s take our lessons from earlier mistakes: intervene now, before it is too late.

COVID-19Regional Security
printTweet
You might also like
Back to Top
CHINA US Focus 2023 China-United States Exchange Foundation. All rights reserved.