Along China’s Middle Corridor: A View From the Ground

The New Silk Road Project is a student-led research project which aims to understand and raise awareness of the land based component of China’s Belt and Road Initiative. In June 2018, the team traveled from London to Yiwu in Eastern China documenting some of its key emerging economic corridors and interviewing the key actors and academics at critical infrastructure hubs along its course.

China’s Middle Corridor, officially known as the China-Central Asia-West Asia Economic Corridor, crosses the heartland of Eurasia, tracing the key arteries of the historic Silk Roads as they existed during the Tang Dynasty. This emerging economic passage and aspiring international transportation route aims to reincarnate an ancient nexus of power, culture and commerce by promoting economic cooperation through Central Asia, the Caucasus and the Middle East as well as connecting the distant markets of Europe and China. Simultaneously it serves to cement Chinese global political and economic influence, bind China to regional economies, and help facilitate China’s movement up the global value chain.
The Middle Corridor, beginning in Xinjiang Province of Western China, acts as a cornerstone of China’s Belt and Road Initiative; a loosely defined development strategy announced by Xi Jinping in 2013. It functions as China’s foreign policy centerpiece and a multifaceted attempt to play a greater role as a regional and, eventually, global agenda-setter. Travelling along this key corridor, however, shows that its vision of promoting trans-Eurasian connectivity is still far from fruition.
With several colleagues, I recently travelled the entire length of the Silk Road Economic Belt, starting in London and finishing in Yiwu in Eastern China. This expedition was the centrepiece of The New Silk Road Project, a student-led research project founded to document China’s Belt and Road Initiative along its key emerging economic corridors. My colleagues and I observed that significant investment has led to incremental improvements in the infrastructure connections between aligned countries. In Istanbul, the recently completed Yavuz Sultan Selim Bridge is helping to ensure and hasten the flow of trade between the markets of Europe and Asia. Further east, the new Port of Baku at Alat in Azerbaijan and Kuryk port in Kazakhstan are connecting people and industry on either side of the Caspian Sea, striving to create an almost symbiotic link between the countries. Additionally, the recently inaugurated Kars-Tbilisi-Baku railway, which is the first direct rail link running between Turkey, Georgia, and Azerbaijan, allows movement of freight carriage onto the ferries in Alat Port, where the railway terminates. Once operational, this track will have the capability to transport 6.5 million tons of cargo annually and, by 2030, this is anticipated to rise to 17 million tons. This interconnectivity has the potential to be further developed by integration with new high-speed rail links such as the Ankara-Sivas line which is due to be completed by the end of 2019 and the planned railway connection between Khorgos Gateway and Aktau in Kazakhstan. 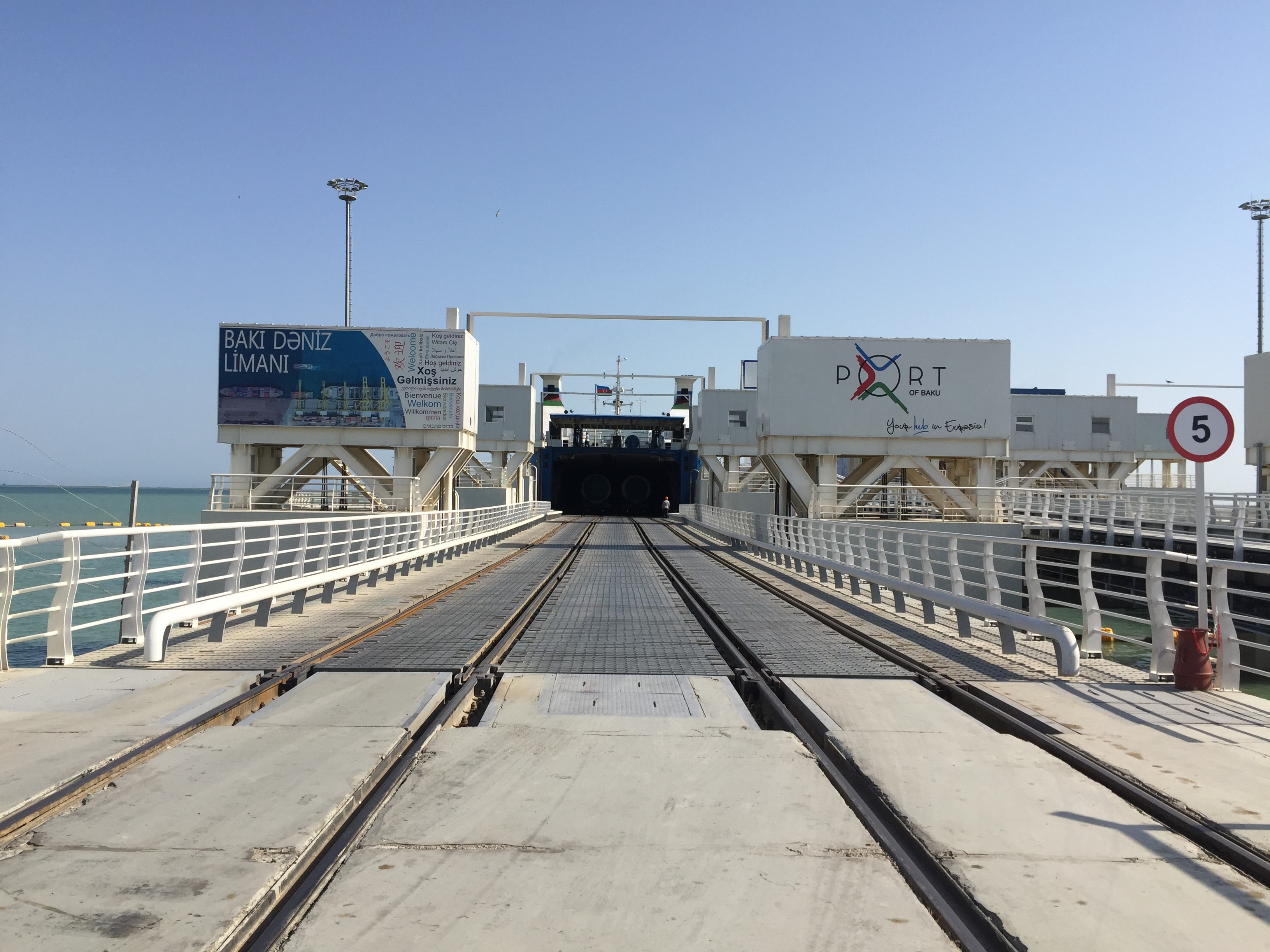 The eastern terminus of the Kars-Tbilisi Baku line and the entry for carriages on to ferries at the new Port of Baku at Alat. The loaded oil containers will be transported across the Caspian in this expanding multi-modal network. 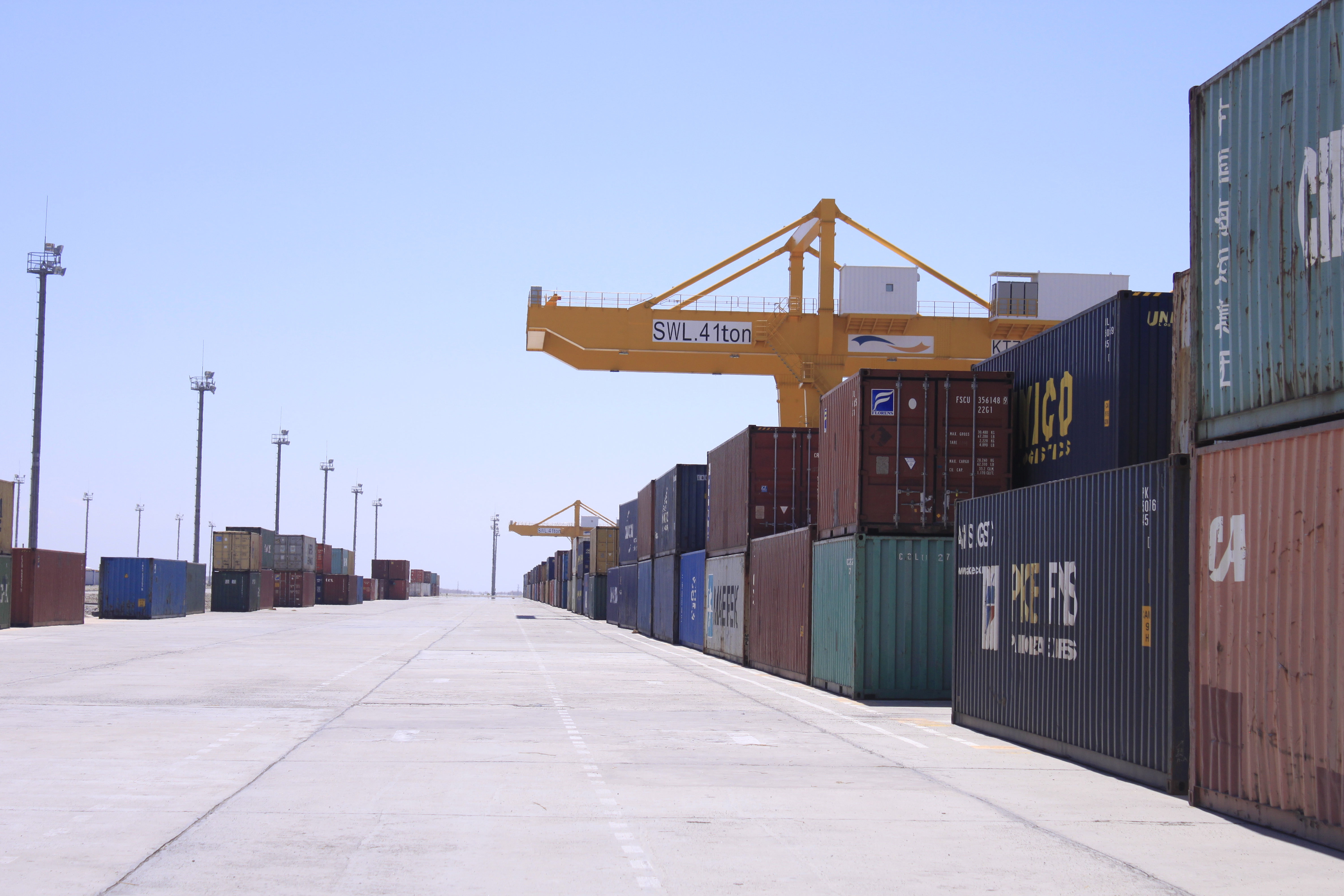 The Khorgos Gateway – the poster-project of the New Silk Road – facilitates the necessary gauge change between Kazakhstan and China on the Middle Corridor and the transportation of Chinese goods across Eurasia.

These actualised and planned investments are promising for the integration of regional economies, accessing new markets, and boosting transport efficiency. However, it may not fulfil the ambitions of China and the other economies along this corridor of creating stronger transcontinental links. Consistent high quality infrastructure along its route will be important, if not vital, to its success; China still has a way to go in this regard. We found the most egregious of these infrastructural deficiencies in Western Kazakhstan, where car refuelling stations tended to be between 200 to 300 kilometres apart and phone signal was often non-existent. The region lacked auxiliary infrastructure such as repair stations, truck-stops and restaurants, and the roads were in dire condition, leading to tedious transit times and excessive wear on vehicles, including our own. The 230 km stretch of road between Makat and Bayganin, the fastest road from China to Europe along the Middle Corridor, took ten hours to cross in a top of the range Jeep Wrangler, a vehicle that has been made to take such conditions in stride. For heavily loaded vehicles, these shortcomings would be substantially more pronounced. Collectively, these factors do not present a strong proposition for transporting commerce along this new corridor, a result that is important to the popularized image of the Belt and Road Initiative in recreating the old Silk Roads.
The historic importance of north-south connections during the Soviet Empire is one of the reasons for the underdeveloped nature of the east-west axis. However, increasing Chinese investment, alongside multilateral funding bodies, has contributed to strengthening the longitudinal transport connections in central Eurasia. The Asia Development Bank, of which China is the third largest shareholder, is funding the rehabilitation of a 299 km section of the road, including the miserable stretch we encountered between Makat and Bayganin. Multiple construction teams are working on the road. Once completed, it will help boost connectivity in this underdeveloped region and lay the groundwork for Kazakhstan to increase its transit trade by more than 150%, up to 50 million tons by 2030. 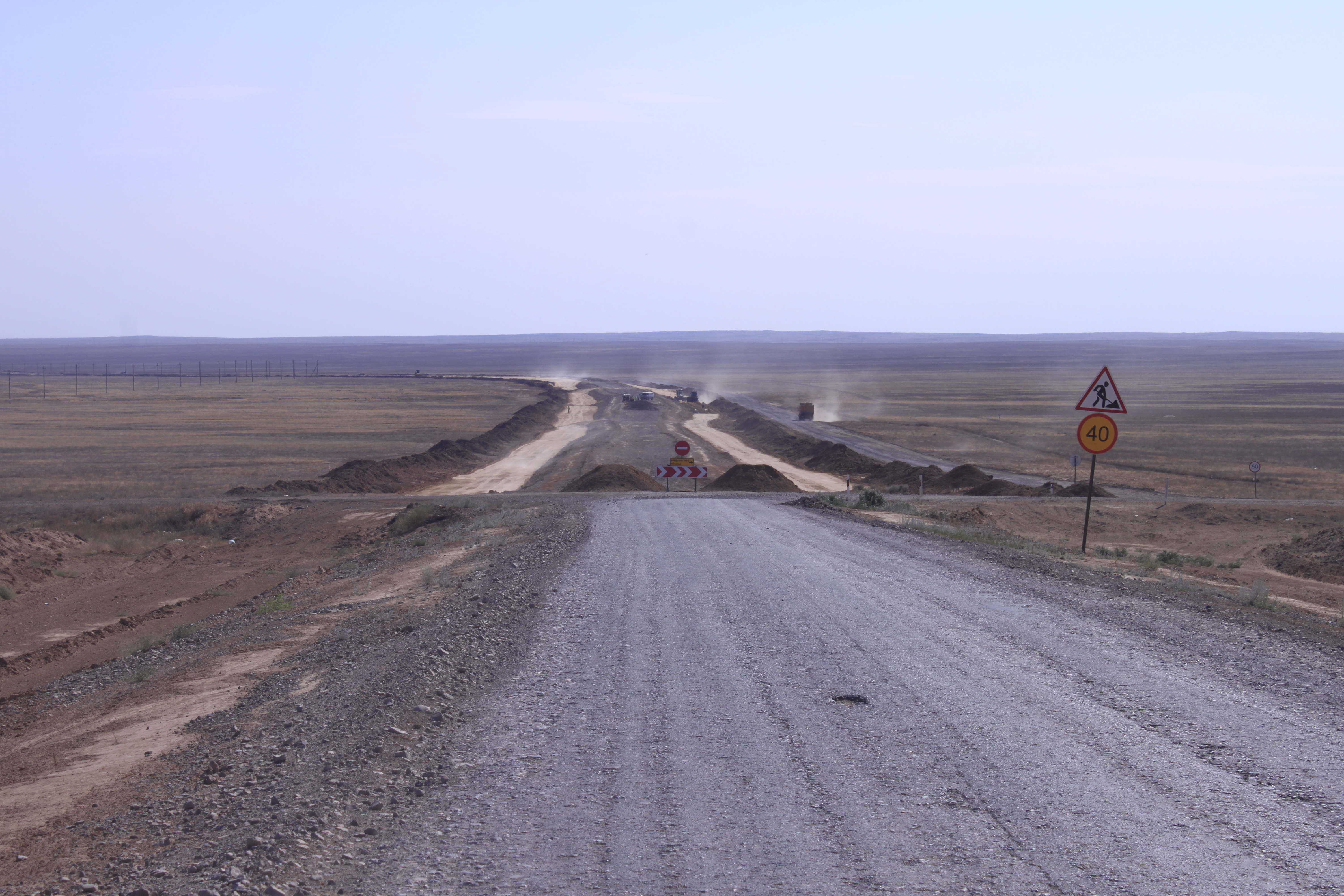 The Asia Development Bank funded reconstruction of the Makat-Aktobe highway; a dilapidated section of road through some of the least populated parts of the planet.

The risk for China’s Middle Corridor is that the majority of this potential growth in overland trade may benefit the more established Northern Corridor. This is due to the more reliable and developed infrastructure along the Russian dominated route to European markets and the higher concentration of population and industry in the aligned regions, providing additional commercial opportunities. Moreover, while the course of the Northern Corridor is less direct, it circumvents additional tedious border procedures that the Middle Corridor does not. Along our route, the customs process at the aspiring industrial cluster and new Port of Baku at Alat took three hours to complete, and the one at Aktau Port in Kazakhstan took four hours. This is exacerbated by incompatible tariffs for cargo transportation, which projects such as the Trans-Caspian International Transit Route have been working to harmonise. The establishment of the Eurasian Customs Union between Belarus, Russia, and Kazakhstan — which has drastically improved transit times – has made achieving this even more crucial.
Even if these procedural challenges are solved, the geographical constraints of this route may ultimately confine it to playing a subsidiary role in Euro-Sino trade. The Caspian Sea is one of the most prominent hurdles; it is both unreliable and expensive to traverse. In July 2018, our one way crossing as a non-commercial vehicle with three passengers amounted to $540. For a commercial vehicle, the crossing is said to be at least double this. Due to the low levels of trade along this route there is no set schedule, zero clarity of information, and the ferry only leaves when fully loaded. As a result, we experienced a 20 hour wait in our vehicle at the terminal and this can be prolonged by up to a week. To make matters worse, the ferries cannot operate for an average of 90 days a year, particularly during the summer months, due to storms and sea conditions. For us, this also resulted in a three day delay anchored off Absheron National Park until the 15 meter waves settled. As a result, this has increased the attractiveness of a more southerly corridor through Iran where Chinese financing is electrifying the Tehran-Mashhad railway. Yet, if China wants to seek economic benefits from the South Caucuses, which are side-lined by passing through Iran, and ensure the image of the Belt and Road as a benign and inclusive initiative to all participating countries, then it is important to successfully incorporate all players in a larger, mutually beneficial network. 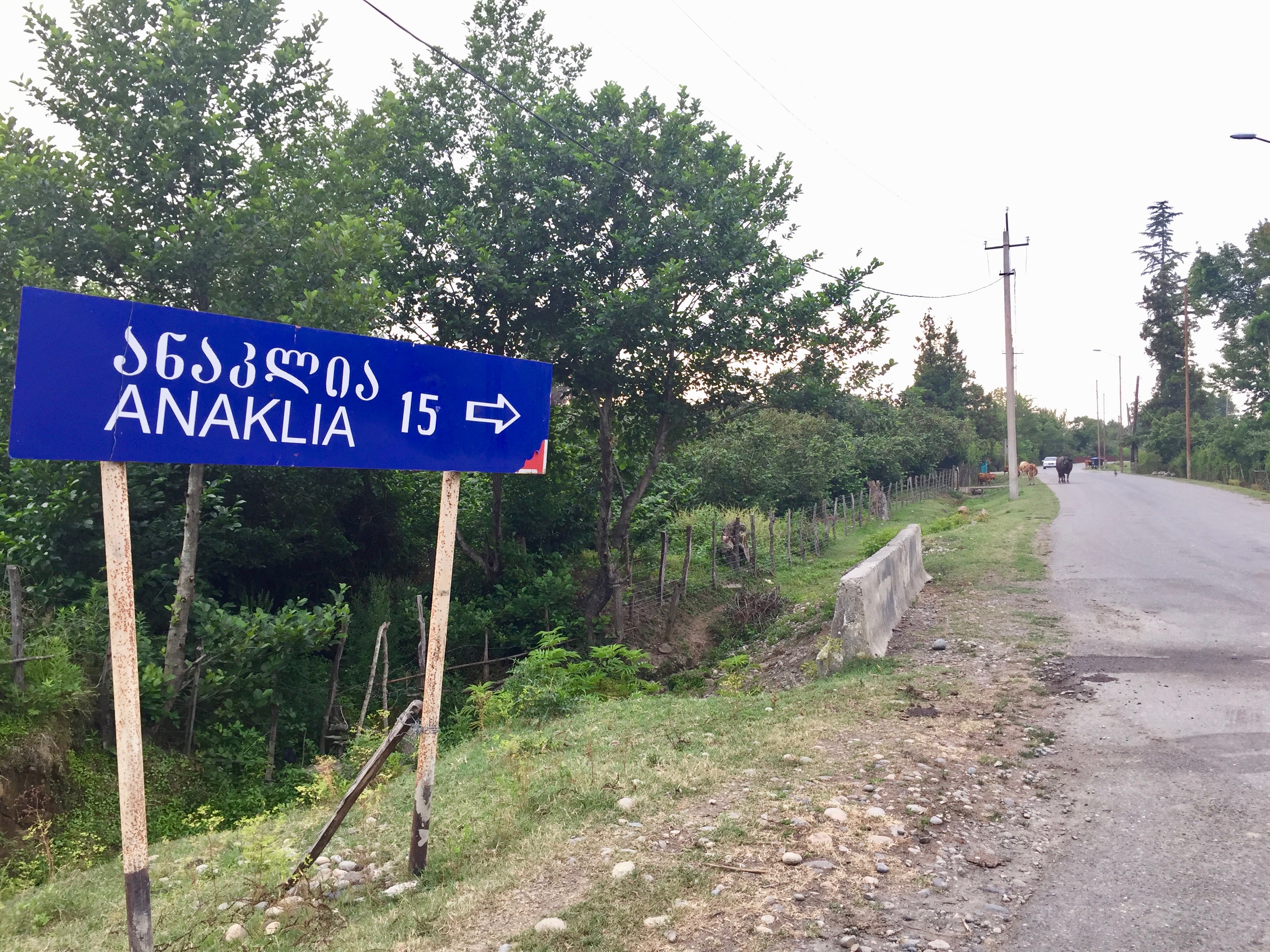 A plastered over sign to the aspiring logistics and transit hub of Anaklia in Georgia. It plans to be a key node in the new Silk Road and its construction has just begun.

As the Middle Corridor gradually develops, geopolitical realities are forcing Ukrainian truck drivers, who cannot obtain Russian visas due to the ongoing conflict in Eastern Ukraine, to use this alternative route to transport cargo to Central Asia and China. This involuntary use both highlights the many hurdles the corridor has to overcome but also the important diversifying function it can play in preventing a single country holding a monopoly on overland connections across Eurasia.
If the Middle Corridor can achieve even the more modest status of an efficient subsidiary corridor in this rising network, it could provide significant benefits to China, the participating economies, and to the popular image of the Belt and Road Initiative as a recreation of the Silk Roads. There is still a long way to go in making this a reality.
Belt and Road
printTweet
You might also like
Back to Top
CHINA US Focus 2022 China-United States Exchange Foundation. All rights reserved.