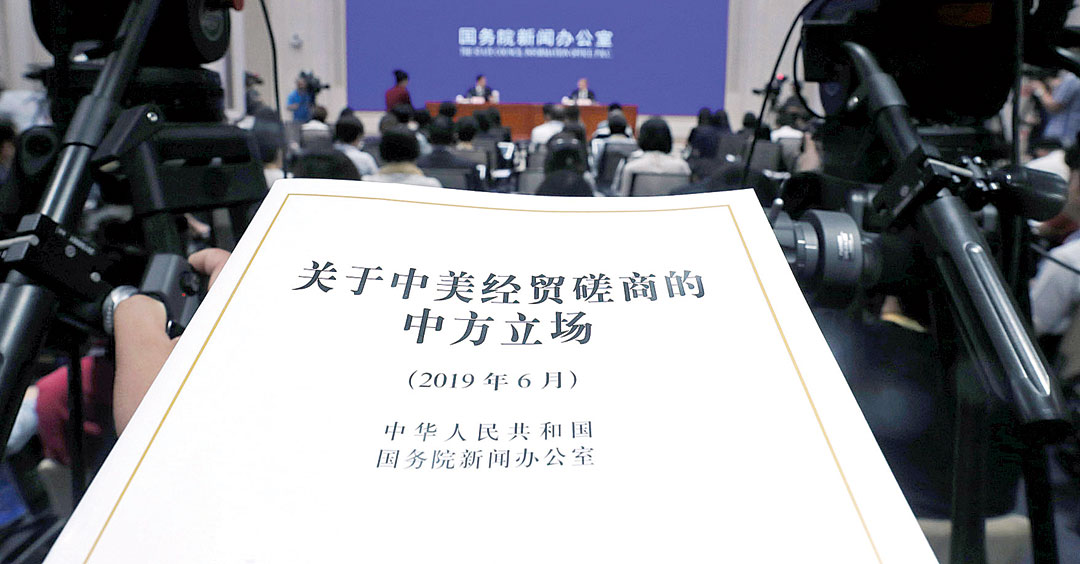 The Trump administration has accused Chinese negotiators of “backpedaling” on negotiations and playing the “blame game” through the release of its recent trade war white paper. China asserts that it is merely stating fact: pushing back against what it sees as unfair and unfounded trade war provocation. Whether in respect to this whirl of rhetoric, tariffs, or countermeasures, it can be challenging to keep pace with trade war developments amid a breakneck speed of highs and lows. Last month, the Trump administration accused China of derailing trade talks after Chinese negotiators rejected terms mandating changes to Chinese law. China pushed back against such claims, arguing that the conclusion of negotiations are premature. On May 15, the Trump administration banned deals with Huawei, prompting China’s Ministry of Commerce to announce that it would create a list of “unreliable” foreign business entities that threaten China’s national security. China has also signaled that it may restrict its rare earth exports, a key component in a variety of technological products.

Against the backdrop of these tit-for-tat responses, China’s white paper underscores how narratives have become entrenched on both sides. China is indeed blaming the U.S. for trade war woes, but the U.S. did react dramatically to China’s revisions to initial agreements – a typical and routine Chinese negotiating strategy. American negotiators have experience with Chinese tactics through years of bilateral exchange, suggesting that vehement condemnation and surprise in the U.S. response is strategic. Ultimately, the contents of the white paper will have fewer implications than both nation’s treatment of key resources. The trade war’s impact on technological development will impact the world in years to come in ways that are not currently fully understood.

China is pushing back against U.S. trade war action, issuing an 8,300-word white paper on May 26, 2019 entitled “China’s Position on the China-U.S. Economic and Trade Consultations.” In the document, the State Council thoroughly details what it sees as U.S. fault for escalation. Accompanying press conferences further urged the U.S. to take “full responsibility” for its role in initiating hostilities.

In addition to thoroughly castigating the U.S., the document aimed to emphasize China’s strength. China, it asserts, didn’t start the trade war, but is ready to finish it. Beijing is working to support bilateral relationships that are mutually beneficially and globally responsible. In contrast to the U.S., the white paper argues China has never wavered in its position. It’s contributions, the document affirms, are credible and produced in good faith. U.S. tariffs are universally harmful and its assertions that China is stealing intellectual property are unfounded, the white paper continues.

These points are, Chinese analysts assert, advanced preparation for Beijing to return to negotiations. Asserting China’s strength and sovereignty provides a pathway back to consultations following U.S. strong-arming, they argue, and was not intended as a rejection of progress. The Chinese Vice Minister of Commerce alluded to this attitude, stating at a recent press conference, “Nothing is agreed until everything is agreed.”

While China’s white paper is a relevant declaration of Beijing’s interests, narrative, and priorities, it doesn’t highlight the trade war’s impact on global technological development – an area with the most potential for lasting consequences. The U.S. has targeted Huawei, pointing to evidence of espionage and violation of national security through its data collection practices. Recent measures have barred the company from doing business with American firms.

Huawei is a global leader in 5G development and a key player in developing Chinese technological self-sufficiency. By maintaining strategic independence, the U.S. ensures that it can prevent reliance on Chinese technological know-how. Decoupling American tech needs early is vital, a reality that European firms have already confronted. Recent reports from industry leaders indicate that European internet providers are struggling to remove Huawei from their supply chains, discovering that if they relied on Huawei’s 4G technology in the past they are unable to switch to another provider to upgrade to 5G. It is in America’s interest to remain independent as this key technological infrastructure is built, especially as experts indicate that Huawei’s network can be used for espionage.

Adopting a hardline against Huawei does serve U.S. interests, but may result in unintended consequences. The trade war has highlighted China’s strengths and fragility; throwing the need for Beijing to master its own technological destiny. Despite the need to carefully evaluate the threat and role of Huawei, the trade war seems to be pushing China to take steps that are directly counter to U.S. aims. Reports indicate that Huawei has reciprocated by assigning thousands of its developers to work around the clock in offices across the country, striving to eliminate reliance on American technology. With Chinese engineers working daily under the hard driving pace of Huawei’s “wolf culture,” progress and innovation is inevitable.

As Huawei strives to make itself, and China, independent from U.S. technological influence, all existing hybrid technology could be more vulnerable to hacking and data theft. Google recently requested an exemption from the Huawei ban, arguing that if Chinese companies supply their own operating systems it will likely produce bugs that limit functionality.

On balance, where does that leave U.S. and Chinese negotiators? Or those across the world who are impacted by the reverberations of these decisions? The trade war’s impact on technological standard setting increases American responsibilities to act responsibly and cautiously. If rash and foolhardy tactics push China to closer to technological supremacy, it will impact users, business, and governments far beyond the limits of U.S. borders. China, for its part, has a responsibility to heed concerns about its tech practices abroad – if for no other reason than failing to address growing mistrust will directly harm its global interests.