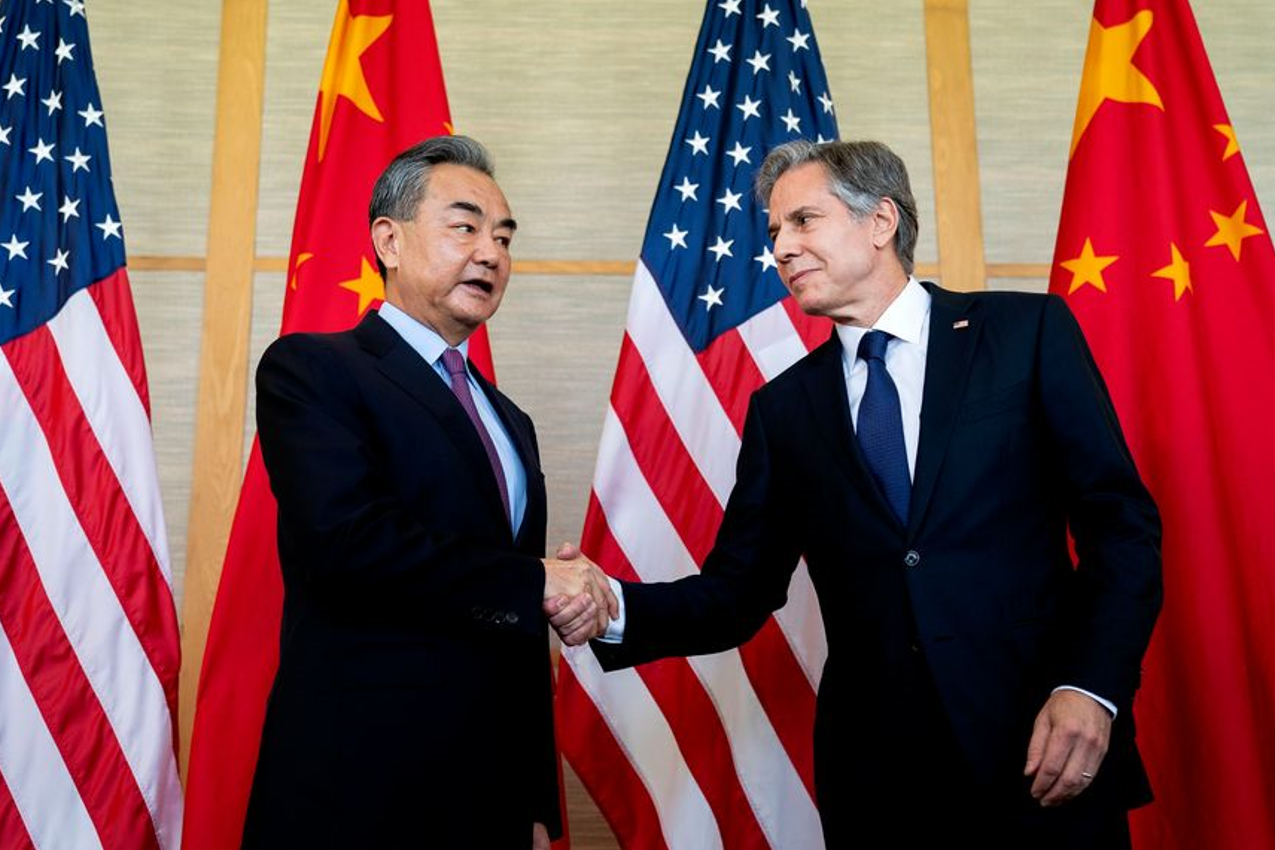 Chinese State Councilor and Foreign Minister Wang Yi had a meeting with U.S. Secretary of State Antony Blinken recently on the sidelines of G20 foreign ministers meeting in Bali, Indonesia. The meeting was conducive to a renewed engagement for China and the United States, and may represent a fresh start in getting bilateral ties back on track.

The G20 event carried high expectations for a troubled world. The China-U.S. high-level meeting was a natural focus of attention and made some achievements. According to news releases from both sides, the meeting lasted five hours and touched on a number of sensitive subjects in present-day China-U.S. relations, helping the two sides better understand each other’s intentions. Both sides believe the dialogue was constructive and conducive to reducing misjudgments. It strengthened conditions for future exchanges at a higher level. The two sides came to important consensus on specific matters of cooperation, including agreeing to create better conditions for diplomatic personnel to perform their duties, to restart consultations on cultural and people-to-people exchanges and to increase cooperation in such fields as climate change and public health.

Against the backdrop of continuously worsening China-U.S. relations over the past few years, these points of consensus are no doubt useful for reversing the atmosphere of the two countries’ interaction. In particular, restarting cultural and people-to-people exchanges will further facilitate nongovernmental exchanges between the two countries and lead to a thaw of the ice of deteriorating ties and pandemic-induced lockdowns.

It’s worth noting that high-level contacts have been active between China and the U.S. There have been five high-level meetings since June 10 touching on topics such areas as strategy, diplomacy, national defense and economy and trade. This has been rare since bilateral ties began to sour, which may be a symbol of China-U.S. relations entering a new stage of engagement.

Turbulence in the world today is the main international background against which increasing China-U.S. interaction is set. Since the COVID-19 outbreak, the picture of countries joining hands to fight the pandemic never emerged; so-called major power competition has stood out instead.

The sudden Russia-Ukraine conflict, and its likelihood of being long-term, has further torn apart the international community. Such significant challenges as energy and food crises, as well as supply chain security, have arisen one after another. Peace and development have encountered their most severe challenges in decades. To cope with such complex challenges, China-U.S. cooperation will inevitably be indispensable. It has never been so important for China-U.S. relations to get back on track. The idea that China-U.S. cooperation is not only about the two countries’ interests but also concerns global security is of genuine significance.

Many domestic challenges have pressed the U.S. administration under President Joe Biden to increase contact with China. With the midterm elections coming in November, inflation at home has not only escalated the risk of recession but also has dealt a heavy blow to the Democratic Party’s electoral prospects. Against the backdrop, the Biden administration has to consider whether to reduce tariffs on Chinese exports and worries that continued attempts to contain China may invite counter-measures that will further complicate an already troubled domestic agenda.

Moreover, a number of new voices for rethinking America’s China policy have emerged in the U.S. Business leader Evan Greenberg, president and CEO of Chubb insurance, for example, has openly called for handling economic ties with China based on interests, rather than decoupling. Others say that ending the engagement policy doesn’t mean there’s no need to stay in contact. Such voices not only represent many American groups’ deliberations from the perspective of pragmatic interests but have also increasingly become an important force driving U.S. decision-making.

Judging from recent China-U.S. interactions, the Chinese side is conspicuously more proactive in shaping the bilateral relationship. At the Bali meeting, Wang Yi explicitly criticized the U.S. for serious deviations in its outlook on the world — on China, on Chinese and U.S. history and on their interests and competition. He straightforwardly pointed out that the U.S. suffers from “Chinaphobia” and urged the U.S. to truly implement the promises of the “four ‘not to’ and one ‘no intention.’ ”

Wang also replied to the U.S. side’s rhetoric about “guardrails,” pointing out that the three joint communiques between the two governments are the most reliable protection. He presented four lists, and the Chinese vision for benign bilateral interaction in the Asia-Pacific. All this was in sharp contrast with the U.S. approach of recklessly smearing China and using small cliques to suppress it.

Many negative aspects of U.S. China policy won’t easily change in the future. Whether or not today’s momentum of interaction can push China-U.S. relations back on track still hinges on whether the two sides can meet halfway. To preserve the dynamism of interaction, the U.S. needs to take practical measures to change its single-minded policy of suppressing China, stop its tricks over China’s core interests and create an atmosphere in the relationship to control damage and get better.

Only with continuous improvements in the overall bilateral atmosphere can any consensus on cooperation be implemented. Only when bilateral ties are developed under the principles of mutual respect, peaceful co-existence and win-win cooperation can Chinese and U.S. interests — as well as the stability of the world — be effectively guaranteed.