Find a Way on Peaceful Co-existence and Mutual Benefit

In 2019, the state of China-US relations has undoubtedly been the focus of attention both in China's diplomacy and in world affairs. I wish to take this opportunity to further elaborate on China's position. This relationship, which is at its fortieth year this year, has encountered complexities never seen in the past four decades.

The US has arbitrarily acted to restrict exchanges and hold China down in the fields of economy, trade, science, technology and people-to-people exchanges. It deliberately smeared China on Hong Kong, Taiwan, Xinjiang, Tibet and human rights, which concern China's core interests and its territorial sovereignty and national dignity. The US has also used various international occasions to discredit China's social system, development path and mutually beneficial cooperation with other countries, and slander China with trumped-up charges. Such flagrant moves are pushing the boundaries of normal international exchange. They have seriously undercut the foundation of the hard-won mutual trust between China and the US and dented the credibility of the US itself in the world. They have not only exposed the malicious motives of the anti-China forces to the Chinese people, but are also being challenged and resisted by more and more countries. 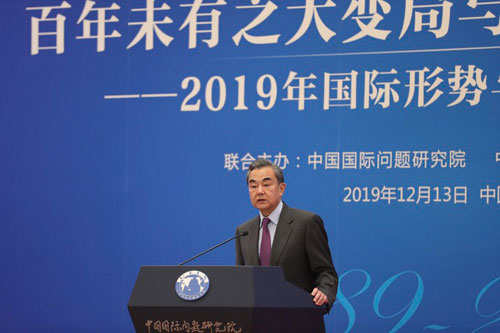 Erroneous actions are grounded in mis-perceptions. The above US moves originate from its wrong perception of China. Some insist that China will seek hegemony when it grows stronger just like traditional powers, and will ultimately challenge and unseat the United States. Some, out of ideological prejudice, find it hard to come to terms with the success of socialism with Chinese characteristics. They refuse to admit that there are alternative paths to modernization other than the Western model. Some blame China for problems in the US, trying to get China to take medicine for the illness of the US. Some even seek to advance their personal political interests by being tough on China.

While its perception of China has gone astray, the US is also showing a skewed view of the world. Instead of living up to its due international responsibilities and obligations, the most powerful country in the world has opted for unilateralism and protectionism. In a little over two years, it has withdrawn from a long list of agreements and organizations, namely, the Trans-Pacific Partnership Agreement (TPP), the Paris Agreement, the United Nations Educational, Scientific and Cultural Organization (UNESCO), the Global Compact for Safe, Orderly and Regular Migration (GCM), the JCPOA, the United Nations Human Rights Council, the Optional Protocol to the Vienna Convention on Diplomatic Relations Concerning the Compulsory Settlement of Disputes, and the Intermediate-Range Nuclear Forces Treaty (INF). Such blatant acts of turning back the wheels of history and walking away from international commitments have caused many difficulties and disruptions for the international community, making the US a troublemaker in today's world.

The sound and steady development of the relations between the top two economies in the world serves the interests of the two peoples and meets the common aspirations of the world. What the past four decades have taught us, most importantly, is that both countries stand to gain from cooperation and lose from confrontation. This valuable lesson still holds true today and will remain so in the future, notwithstanding changes in China, the US or the world. Managing differences and staying focused on cooperation will not only benefit both countries but also be a blessing for the whole world.

On the part of China, what we seek is our legitimate right to develop ourselves. We never had any intention to challenge or replace the US. What we advocate is fairness and justice in the world. We will never go down the beaten track of seeking hegemony with strength. What we pursue is common progress of humankind, never the selfish interests of China itself.
We always believe that cooperation is the best and the only viable option for China and the US. We urge the US to get cool-headed as soon as possible, and put its China view and world view in proper perspective. We urge the US to work with us for a relationship of no-conflict, no-confrontation, mutual respect and win-win cooperation. Our goal is to jointly find a way of peaceful co-existence and mutual benefit between two great nations on this planet with different social systems, development paths, histories and civilizations.

The text is from the opening remarks by Wang Yi, China’s state councilor and minister of foreign affairs at the Symposium on The International Situation and China's Foreign Relations in 2019 held in Beijing on December 13. Mr. Wang's entire speech is available here.

Wang YiUS-China Ties
printTweet
You might also like
Back to Top
CHINA US Focus 2021 China-United States Exchange Foundation. All rights reserved.