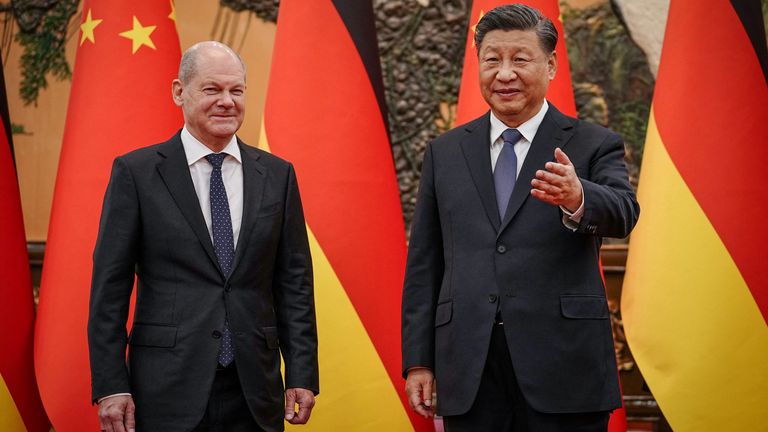 On the morning of 4 November, President Xi Jinping met with German Chancellor Olaf Scholz on his official visit to China at the Great Hall of the People.

German Chancellor Olaf Scholz visited China on Nov. 4. It was the first visit of a European leader to China after the 20th National Congress of the Communist Party of China.

The visit had been a focus of media attention long before it took place. In previous months, there had been reports it might be postponed. It was also reported that the chancellor was under pressure and faced resistance from his own government and coalition partner for visiting China at this time.

The visit has attracted great attention both in Europe and worldwide, as it sends important messages for China-Europe relations. In the past couple of years, there has been continuous talk — and calls for a rethink — regarding European policy toward China. As a clear illustration, the EU named China for the first time as a systemic rival, along with being an economic partner and cooperating partner.

In the European debate about its China policy, some emerging features can be detected. First, when talking about China-Europe economic cooperation, the concept of security is taking precedence over the logic of benefits. Second, the differences in values and ideologies that China and Europe have long had are depicted in a way of model-like competition and struggle. Third, transatlantic unity or alignment in dealing with China is somewhat automatically taken as good for Europe without further analysis. It is speculated that the incoming German policy paper on China under Foreign Minister Annalena Baerbock will reflect this rethink.

In a popular European narrative, the pandemic and the outbreak of the Ukraine conflict justified a dramatic change of approach toward China. Some draw parallels between Europe’s energy dependence on Russia and economic dependence on China. Some continue to cite China’s stance over the Ukraine conflict as proof that China is a clear rival to Europe. Partly abetted by America, increasing calls have been made to consider the Taiwan issue in China-Europe relations. It’s obvious that for many of those calling for a rethink, the three-pronged definition of China has not gone far enough, and in fact the “rethink” itself requires no European thinking but only copying from the American line.

However, Scholz’s visit to China showed another side of the argument in the European debate, with three main messages:

First, for all the talk of economic resilience and cutting dependency, economic decoupling is neither desirable nor possible. Chancellor Scholz stressed that decoupling from China is not an option for Germany. The big business delegation traveling with him — which included big manufacturers such as BASF, Volkswagen and BMW and emerging businesses in consumer goods, health and green technologies — stated the simple fact that past decades of economic cooperation have been lucrative for German businesses, and the potential of expanding Chinese market and cooperating with Chinese partners in emerging fields is equally promising. The decision of chemical giant BASF to make a $10 billion investment in China is a clear vote of confidence.

Second, the direction that that the China-Europe relationship heads is not just about business interests but also has bearings on the global level. Scholz has been accused of being kidnapped by big business interests in planning this trip, and he defended his position by citing the China-Europe consensus on nuclear weapons as “reason enough to visit China.” It is true that the cooperative tone and pragmatic efforts of the two sides is increasingly important in a world beset by conflict, hunger and climate-induced disasters. China and Europe both want a multipolar world in which global cooperation and multilateralism remain the theme, rather than a world with opposing blocs in which power and rivalry are the only language.

This is the basic foundation upon which China and Europe should and can work together. In the past, they have had successful collaboration on development and climate. The imperative now is for the two to pursue the global common good in the face of unprecedented challenges.

Third, political trust and goodwill between countries needs to be managed and cherished. Chancellor Scholz’s insistence, amid domestic pressure, on visiting China and to meet with the Chinese leadership after the CPC congress speaks to his determination to manage the relationship with China with great care and attention, despite the raucous politics at home. It is the approach adopted by his predecessors and has served Germany well. The goodwill and trust between China and Germany, as well as many European countries, is the result of years of hard work and is more easily damaged than built. Strategists can talk about a dramatic change of approach to China at whatever cost, but statesmanship requires weighing all factors and adopting a pragmatic approach that’s in the interests of one’s own country and people.

Scholz’s visit to China brings a reasonable voice to the European debate on China. The past number of years has seen Europe’s China debate heading in the wrong direction. The notion of “strategic rival” is squeezing out the room for “cooperation partner,” and many Europeans only have perceptions of China, without understanding what China really is.

However, Scholz’s visit helps set the narrative straight. A constructive relationship with China is essential for Europe in this era. Europe’s China policy should be shaped by a comprehensive analysis of Europe’s interests and ambitions. The agenda for China and Europe should be set by the two sides, not by a third party, and should reflect their hopes for the future, not their fears.

After the 20th National Congress of the CPC, China is ready to work with renewed confidence and strength — both individually and cooperatively with its partners — for world peace and development. The consensus reached with Germany during the chancellor’s visit marks a good beginning. China expects pragmatism. And reason will eventually win the day in the European debate about China.