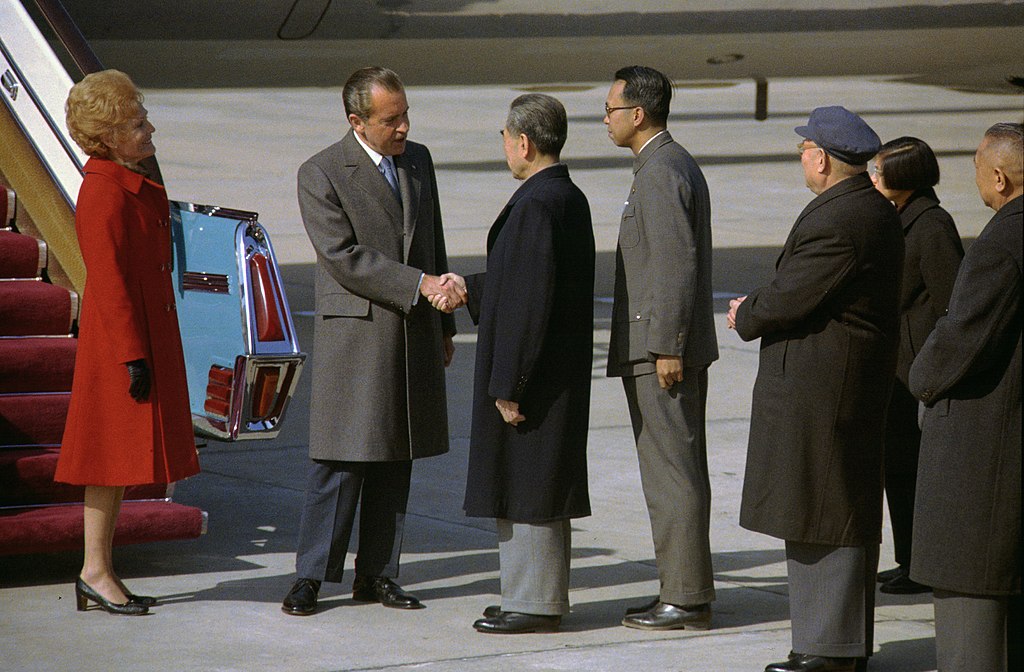 In 1972, U.S. President Richard Nixon’s visit to China marked the beginning of normalization for China-U.S. relations. It is a matter of considerable significance not only for bilateral ties but because it profoundly changed the world. At the time, the Chinese side’s reception of Nixon was high-profile, courteous and carefully arranged, yet neither humble nor pushy. In the apparently quiet atmosphere in Beijing, people could feel a tremendous change taking place — the 22 years of standoff and isolation between China and the United States was finally coming to an end.

China, the U.S. and the world have undergone enormous changes over the past five decades. Changes in bilateral relations have no doubt been key factors responsible for many of those changes. The true scope was far beyond people’s imagination at the time. Today, many in the ice-breaking generation who maneuvered the historic turn in China-U.S. relations have passed away, but their foresight, courage, wisdom and effort should always be admired. The precious experience they left behind are worth keeping in mind by subsequent generations.

From a short-term perspective, the process of China-U.S. relations turning from deep-freeze to thaw in the early 1970s was indeed dramatic. From a long-term perspective, however, there was historical necessity behind it: It was impossible for China and the U.S., as two great countries inhabiting the same world, to remain in permanent standoff, refusing to recognize and deal with each other.

When the moment of reconciliation arrived, China was going through its “cultural revolution”; America was enmeshed in the Vietnam War. this background to some extent caused each side to imagine the other as an enemy. And yet detente emerged. What is unusual about the logic of history is that it often bears fruit above and beyond human design.

The beginning of normalization in China-U.S. relations at the time entailed not only a shared will but also finding and seizing a convenient opportunity. The decision to promote normalization was certainly based on realism. The international situation was evolving dramatically in the late 1960s and early 1970s. The U.S. was stranded deeply in the quagmire of war, and found itself in a disadvantageous position in its competition with the Soviet Union for global hegemony, and China desperately needed to get rid of the international isolation born of the “cultural revolution” and stave off the Soviet threat to Chinese national security. The convergence of their respective needs provided an opportunity to change bilateral ties.

Under the circumstances, both on the campaign trail and after his inauguration, Nixon displayed an interest in improving ties with China. Mao Zedong sensitively noticed the momentum and made up his mind to drastically adjust Chinese foreign policy, starting with China-U.S. relations. Zhou Enlai played a crucial role in making and implementing the decisions. He personally participated by opening secret channels for China-U.S. liaison through meticulous arrangements. He carefully prepared for secret talks with Henry Kissinger, and finally made the diplomatic breakthrough that ultimately led to normalization.

It is worth special emphasis that the process of normalizing China-U.S. relations was a classic example of combining “quiet diplomacy” with “public diplomacy.” Taking a closer look at the process of the Chinese and U.S. approaches to one another, one can see that quiet diplomacy included signals of goodwill through moves that were apparently trivial yet of substantial significance in improving ties, and making contact at high levels on both sides via secret channels — as well as behind-the-scenes negotiations and consultations.

Without the initial mutual trust built this foundation or well-thought-out behind-the-scenes arrangements, there would not have been the brilliant, dramatic developments the general public witnessed on the open diplomatic stage, nor a true and lasting motivation and influence.

Nixon’s China visit kick-started the normalization of China-U.S. relations. The Joint Communique the two countries published in Shanghai meant the long-standing state of mutual hostility had come to an end, and the doors to normal China-U.S. relations had been formally opened. The international political order had changed, bringing fresh hope of peace for the Asia-Pacific and the entire world.

But the Communique also revealed a huge gap between the two governments’ positions on Taiwan. The Nixon administration did not explicitly recognize the People’s Republic of China as the sole legitimate government. This meant achieving normalization would be a difficult journey. The process didn’t come to an end until Jan. 1, 1979, when the two countries formally established diplomatic relations. Despite some setbacks, China-U.S. relations, by and large, pressed ahead ever since — that is, until the past few years.

Looking back on normalization and the subsequent development of relations, three aspects are indispensable.

First, normalization and development were consistent with the trend of history — beneficial not only to the people of both countries but also to peace, stability and development of the Asia-Pacific and the world.

Second, the Five Principles for Peaceful Coexistence are the cornerstone of China-U.S. relations and the guiding principle for the healthy development of the relationship. These principles run through all three China-U.S. communiques.

Third, properly handling Taiwan is key to the healthy development of China-U.S. relations. Recognizing there is only one China, that Taiwan is a part of China and that the People’s Republic of China is the sole legitimate government of China are the premises upon which China can establish and develop friendly ties with any country. Based on this, the U.S. government decided to cut off diplomatic relations with Taiwan, terminate its joint defense treaty and withdraw U.S. troops.

The American people have retained cultural, business and other nongovernmental relations with the people of Taiwan. Yet, for various reasons, Taiwan remains a major obstacle in the development of China-U.S. relations. In the future, the three aspects listed above will remain essential in handling bilateral ties.

Half a century has passed since Nixon’s China visit. Today’s world, today’s China and today’s U.S. are all very different from what they were back then. One significant change is the rise of China, which has become the world’s second-largest economy and an eye-catching emerging power. Another involves structural contradictions that have arisen between China and the U.S., which are closely interconnected.

Since China-U.S. relations involve problems far more complicated than when they normalized ties, the present adjustments in the relationship are no doubt extremely challenging and involve three overlapping layers: global issues, Asia-Pacific issues and bilateral issues.

During his video meeting with U.S. President Joe Biden on Nov. 16, 2021, President Xi Jinping made some highly significant remarks, among them that the most important event of the previous 50 years was the restoration and development of China-U.S. relations, which benefited both countries and the rest of the world. In the next 50 years, the most important thing in international relations will be China and the U.S. finding ways to get along.

Summing up the lessons in the history of bilateral ties, Xi emphasized three principles in China-U.S. relations.

Second is peaceful co-existence. No conflict and no confrontation is a bottom line both sides must adhere to.

Third is win-win cooperation. Chinese and American interests are so deeply intertwined that both win when they cooperate and both get hurt when they fight.

Past experience, if not forgotten, provides a guide for the future. So what inspirations can we draw today from the normalization of China-U.S. relations? I believe there are two.

First, China-U.S. relations must be handled with a realistic attitude and an awareness that solving many of the world's problems requires China-U.S. cooperation. Dr. Kissinger once said that despite their ideological differences China and the U.S. have come together because of certain common interests, dealt with each other, held no unrealistic expectations about the extent of their collaboration and were determined to carry out collaboration as much as possible in limited areas.

Second, cultivating a China-U.S. relationship that meets the needs of our time takes patience and wisdom, as well as the courage to break rules. There were plenty of such cases during the process of normalization and the development of bilateral ties. As two great countries, China and the U.S. should be capable of transcending past history.