Importance of the 'European Rim' After a US-China Decoupling

Even a modest China-US decoupling from the current world trade and supply chain systems would force China, the European Union, and the United States to look elsewhere for new production zones and growing markets. Since China will likely absorb much of Asia into its sphere of influence, the 'European Rim', which includes countries around the periphery of the Mediterranean Sea, will become an important swing-region for future economic and geopolitical contests. European and American business in Asia would need to shift westward, intensifying competition in and around Europe. China is already heavily invested from the Balkan peninsula westward, as well as through Eurasia through the Belt and Road Initiative (BRI). Similarly, many European firms rely on exports shipped to growing Chinese markets.

The resource and labor rich European Rim is massive, and links Ukraine, Belarus, and Russia in the north with the Balkan crossroads. Greece and Turkey tie Europe to the Levant and back around west through North Africa toward Morocco. The region contains the Mediterranean, the Suez Canal, and Arctic sea routes, and the crucial land paths that connect Europe, Asia, India, and Africa. In the coming decades, the region will evolve into another leading consumer-based and services economy, which will demand luxury imports and better jobs for a growing middle class. The outskirts of Europe will begin to resemble western Europe more and more in its consumption habits. The crucial economies of the European Heartland – Austria, Germany, and Italy – all rely heavily on the European Rim for labor and trade. Historically, they all interacted, for better or worse, with most of the nations in the European Rim. 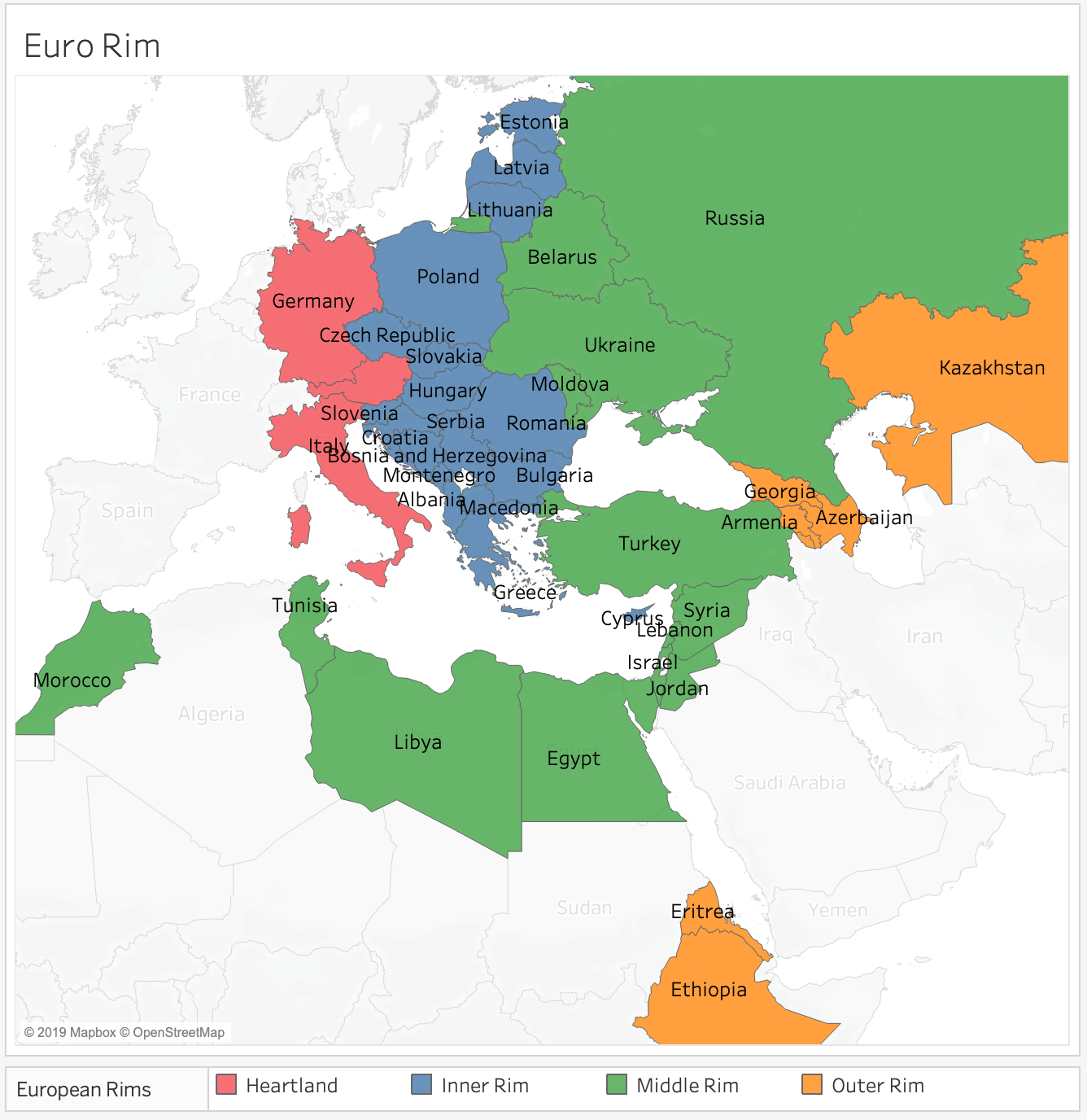 For example, on the Huawei 5G infrastructure issue, the UK and France imposed rather strict bans, promising that their telecom networks would be free of Huawei gear by 2027 and 2028 respectively. However, Germany seems to be prioritizing its commercial interests in Chinese markets. In 2019, Germany accounted for 42 percent of EU exports to China. No other EU member reached 10 percent. Germany has also not given a straight answer to its European partners or the US on the Huawei debate.

The German example highlights the second factor, which is a dire need for additional economic opportunities, investment, and trade. Many European Rim states rely on Chinese markets as a consistent export destination. The production of these exports maintains decent middle-class jobs for European workers. A survey conducted in June by the European Chamber found that China remains in the top three investment destinations for more than 60 percent of European corporate respondents.

The Current State of Affairs

The BRI, through its infrastructure and commercial investment, elevates the importance of the European Rim. However, the BRI somewhat undercuts local industry and labor and is often criticized by the EU for its environmental standards. To counter Chinese investment and develop the region, the EU should emphasize the importance of the neighboring European Rim to target a market of more than 500 million potential middle class consumers and vital production zones for EU firms. The region could be a magnet for German or French exports, especially as transport routes improve and demand grows as living standards increase.

A long-term EU 'plan' for the European Rim would allow Europe to create a separate path from US-led transatlantic foreign policy and China's BRI. Europe could solve its 'trade wars' with the US and China by focusing on European Rim markets instead of exporting to faraway markets.

When we analyze the European Rim from its core outward, we can imagine an inner rim, middle rim, and outer rim. We notice that the inner rim - the Baltic states, the Visegrád group, and the EU and non-EU Balkan countries have relatively low salaries, experience significant brain drain, and suffer from persistent youth unemployment. Population statistics are negative, with many younger workers heading west and relying on the German automotive industry. Countries like Hungary and Serbia have looked east to China for cheap credit directed toward infrastructure projects. Their politicians have also been pragmatic in choosing trading partners between China, the EU, and the US. They should continue these policies and focus on domestic development and middle class-oriented strategies by weighing the pros and cons of doing business with western partners or with the Chinese to maximize outcomes.

The GDP potential of the innermost core of the European Rim is about $14 trillion. Its average annual growth is nearly 4 percent, but the annual GDP per capita is still persistently low at about $16,000. The worst problem is unemployment, which hovers at around 10 percent on average, with youth unemployment at nearly 21 percent. While the population of the inner rim is about 105 million, with most workers literate and educated, they are most reliant on tourism and the services industries. Competing world powers will likely look to leverage the workforce of the inner rim, which historically went westward for job opportunities, most often in Germany.

When we examine the middle rim and move from Europe's core, we see an immediate drift towards China. The economies of Russia, Turkey, and Israel are the largest of the middle rim, where agriculture and natural resources are increasingly crucial for GDP. The region hosts nearly 480 million people, and the region is significantly younger, with population booms in both the Middle East and North Africa. These young societies are rapidly urbanizing and demanding more luxury goods, which China, the EU, and the US can provide.

Lastly, we observe an 'outer rim,' which is unique but contains a ton of potential, most notably in Ethiopia, which hosts a population of 109 million with a significant Christin Orthodox population. The outer rim is most diverse, but included as a category within the European Rim because of its vast demographic, labor, and resource potential. The outer rim also includes the post-Soviet Central Asian and Caucasian states and Eritrea. Unemployment across the outer rim, for which all data was available, is shockingly lower than both the inner and middle rims. The demographic trends, similar to the middle rim, point toward very young societies that will likely seek opportunities in Europe or Asia if the economic situation does not improve. The economies of the Outer Rim, in terms of GDP composition, are almost all unique. For example, Kazakhstan and Georgia illustrate 'European' structures similar to the inner rim where most of the economy is in services, followed by industry, and very little dedicated to agriculture. However, Ethiopia and Armenia are more dependent on agriculture, while Azerbaijan splits its economy between heavy industry and services. Mining and natural resource extraction are crucial to Central Asian societies.

What the European Rim Needs

Active Chinese, European, and American firms in the European Rim need to smooth regulatory barriers, identify investment opportunities for foreign firms, and facilitate politically agnostic results that advance national interests. A productive European Rim would consider the offerings of all the potential investors available who prioritize investment and growth over the geopolitical competition, multipolarity over divisive alliance formation, and lastly, regional cooperation over ethnic and regional conflicts. The only 'necessary' reforms enhance growth and improve the overall investment climate so that the region becomes a crucial production and consumption zone for Europe, Eurafrica, and Eurasia. The connectivity associated with the area and its importance as a global crossroads require infrastructure projects that will spark job growth and decrease unemployment. The motives for increased investment, production, employment, and connectivity should be to provide affordable power, housing, health care, communication, food and water, education, and essential infrastructure to the middle class for lasting and sustainable full employment.