No Relations Reset at the Alaska Summit 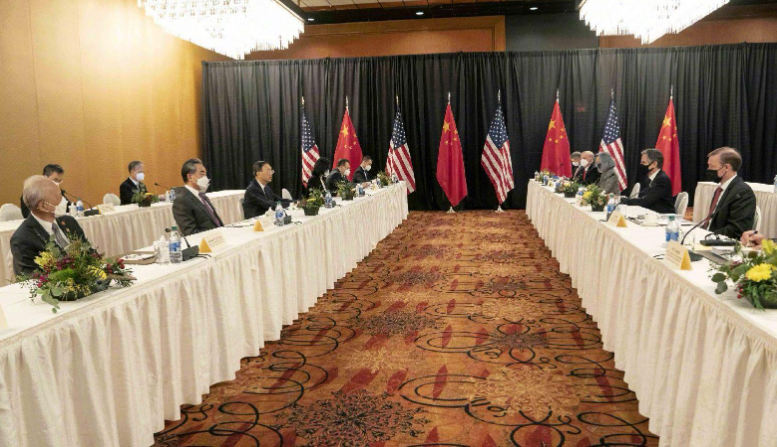 As the Alaska Summit concluded last Friday, headlines broadcast a public spat between the U.S. and China in the first major meeting of the Biden administration. To astute observers, this should not have come as a surprise. Both U.S. and Chinese officials signaled low expectations in the lead up to the summit, reiterating existing positions on the whole range of outstanding issues. As discussed last month, the rise of a new U.S administration does not signal a regime change in U.S.-China relations. However, the Quad Summit of recent weeks does offer an emerging picture of the Biden administration’s strategy for dealing with China. While Trump-era antagonisms are here to stay, we can expect a more nuanced attempt to rekindle the U.S.’s regional alliance system in an effort to contain China.

International observers anticipated little progress from the Alaska Summit as the date approached, with “tough talk” expected from the first major U.S.-China meeting in some time. Nevertheless, somewhat sensational headlines communicated that China “mocked” the U.S. and was “defensive” around contentious issues. In reality, both U.S. and Chinese officials stuck to standard and well-worn talking points. The Americans criticized Chinese policy on Xinjiang, Hong Kong, and cyber espionage, while Chinese representatives insisted that the U.S. refrain from commenting on “domestic” issues and that the U.S. had little to be proud of in its own treatment of minority groups. Each country discussed its redlines without undue saber rattling or escalatory threats.

Despite the hue and cry, the U.S. and China committed to establish a joint working group on climate change, which was a positive development. U.S. officials, off the record, described private talks between the two countries as “civil.” We should therefore take the public bickering with a grain of salt—while we may not have gotten the rapprochement that some would hope for, there was no obvious relations breakdown at the summit. Indeed, the public bluster of officials from both sides should be interpreted in the light of Chinese and American domestic politics, where nationalist posturing is increasingly seen as politically beneficial.

As I argued in February, the Biden administration does not currently offer an opportunity for a reset of U.S.-China relations. Being seen as “tough on China” is still an easy way to score cheap points in DC, hence the non-stop pressure from Congress for sanctions, saber rattling, and the like. The administration has also made a calculated decision to continue the trade war, likely as an appeal to Rust Belt voters who could swing the 2024 election. Sadly, one also cannot discount the general rise of anti-Asian sentiment in America over the past year, with an increase in attacks and abuse culminating in the recent tragic shooting at an Atlanta spa. Prejudices stoked by the Trump administration have created an enduring political incentive for moderate Democrats like Biden, who base their strategy on flipping conservative white voters, to take a tough line on China.

The Quad Summit between the U.S., Japan, India, and Australia one week prior offered an early look at the difference between the Trump and Biden administrations’ strategic approaches to China. While China was not mentioned in attendee statements, cooperation in balancing against China’s rise was a key subtext of the meeting. The Quad is not a formal alliance, and it includes countries whose differing priorities and approaches to China would make such an alliance difficult to establish. Nevertheless, the meeting showcased the multilateral approach to balancing that Biden’s appointees favor. Most notably, the Quad Summit ended with a joint commitment to produce one billion vaccines for distribution in Southeast Asia by 2022, with India manufacturing the vaccines, the U.S. and Japan providing financing, and Australia offering logistical support. This is a serious initiative aimed at showcasing the power of further cooperation, and is intended to provide a public good as a counter to China’s expanding influence in Southeast Asia.

The events of the preceding weeks thus offer a preview of U.S.-China relations under the Biden administration. There will be no post-Trump thaw as some might have hoped. To the extent that Trump’s policies forwarded the interests of certain U.S. economic sectors and the security state, those policies are quietly being continued. Given the lack of serious domestic opposition to tariffs or ‘talking tough’ on China, it’s hard to see a major change here any time soon. However, the administration hasn’t yet ramped up pressure with confrontation-seeking behavior like military maneuvers. Due to the weakening of U.S. alliances during the Trump years, Biden’s team likely sees strengthening the old alliance network as its primary priority. The Quad Summit is the first example of the kind of initiatives that the U.S. will pursue to rebuild this network before it seeks to challenge rivals like Russia and China in their respective regions.

China, for its part, continues to walk a difficult line. The wisdom that guided decades of foreign policy—“hide your strength, bide your time”—remains true today. It is a virtual inevitability that China will be more influential than the U.S. in Asia in ten to twenty years. The more China throws its weight around today, the more it risks pushing its neighbors into the U.S. camp in order to balance against it. Continuing the present path of substantial foreign investment and other diplomatic initiatives would offer a much safer means of cultivating future Asian allies. However, domestic voices for a more assertive foreign policy continue to grow louder, as they have in other historical rising powers. The more China’s strength grows, the harder it will be for doves to argue for caution.

The dynamics of U.S.-China rivalry have not radically changed since the U.S.’s November election. Our prediction for the future is more posturing and regional competition, with an added U.S. emphasis on cultivating a regional anti-China bloc. Some small rays of hope appear in the simple fact that U.S.-China summits are once again happening, and that a climate change working group will hopefully be established. These are small victories in that they offer an opportunity for diplomats and policymakers from both countries to communicate with one another and build relationships, particularly in sideline and private discussions. While foes will not turn into friends outright, the reestablishment of the multitrack diplomacy of the Obama years could offer yet another means to build cross-country ties. These lines of communication will be crucial as more flashpoints inevitably emerge in the years to come.

U.S.-China Dialogue
printTweet
You might also like
Back to Top
CHINA US Focus 2022 China-United States Exchange Foundation. All rights reserved.