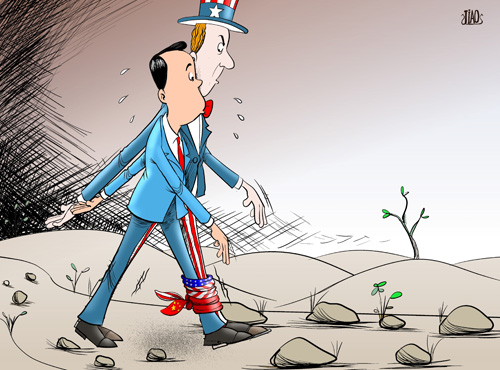 The volatility of Donald Trump’s administration has added to the uncertainties in China-US relations. Circumstances present both opportunities and challenges.

1) There is a great disparity in strength between the two powers. The United States still holds an absolute advantage. According to the power transition theory in international relations, there is high probability for conflict when a dominant power and a challenger reach the stage of relative equivalence of power, especially when the challenger is dissatisfied with the status-quo. Therefore, this disparity in strength makes the relationship relatively stable.

3) The high degree of economic interdependence between China and the United States has formed a “community of interests”. According to the Ministry of Commerce, Sino-US trade volume in 2016 amounted to $519.6 billion, compared to only $2.5 billion in 1979, an increase of 211% in 37 years. Today, China and the US are each other’s largest trading partner. According to US statistics, China is one of the fastest growing markets for US exports. From 2001 to 2015, US goods exports to China increased by 500%. In January 2017, a report released by the US-China Business Council showed that, in 2015 alone, US exports to China directly or indirectly supported 1.8 million new jobs in US and contributed $165 billion to US GDP.

4) The two countries have established many joint initiatives, involving fields like security, law enforcement, economics, and culture. The communications channels, especially the intensive communications between the two heads of state have already played an important role in seeking common ground while managing and reducing differences.

1) It’s been speculated that China and America, as a rising and an established power, are fated to go to war. The so-called “Thucydides’s Trap” hangs over the relationship like a curse. This idea is reflected not only in American strategic circles, but also at the societal level. In a poll conducted by Gallup in February 2016 Americans put China amongst the top four greatest enemies of the U.S. The American public regards the two countries as being in a zero-sum game. For example, some people in the United States regard the establishment of the Asian Infrastructure Investment Bank, which was promoted by China, as a failure of American diplomacy. They view the US withdrawal from the Trans-Pacific Partnership and the Paris Climate Agreement as America ceding global leadership to China. A common criticism is that Trump’s “America First” policy may result in “China First”.

At the same time, many Chinese also regard the United States as a huge threat to China’s development. The report released by the Pew Research Center in October 2016 found that Chinese people named U.S. power and influence the top international threat facing their country. 52% of those surveyed thought the U.S. was trying to prevent China from becoming an equal power and 45% said the U.S. was a major threat.

2) In recent years, there has been more direct security competition between China and the US, especially in the South China Sea. The US government has repeatedly dispatched military vessels and aircraft to conduct reconnaissance activities in the region in the name of “freedom of navigation and overflight”. China has had no choice but to respond by warning and repelling them, which increases the possibility of incidents and conflicts. In addition, the United States has tried to cast China as a rule breaker. US Secretary of Defense James Mattis said at the 2017 Shangri-La Dialogue that “we cannot accept Chinese actions that impinge on the interests of the international community, undermining the rules-based order that has benefitted all countries”.

It should be noted that security issues in recent years, such as the issues around the Diaoyu Islands and the South China Sea involve third-parties. In April 2017, the Pew report showed that if one of America’s Asian allies like Japan, South Korea, or the Philippines were to become embroiled in a military conflict with China, most Americans (58%) would back the use of force against Beijing. Nearly two-in-three Republicans (65%), 52% of Democrats, and 62% of independents held this view. Evidently, resolving the security dilemma between China and the US has become more urgent than ever.

3) Structural differences are difficult to resolve. China and the US have fundamental differences in their political systems, values, and ideology. These contradictions mainly originate from their different cultures, and are not easy to overcome. Though the Trump administration does not seem to treat values as a priority in US foreign policy, they remain a significant factor nonetheless. In May 2017, Secretary of State Rex Tillerson said in a speech to U.S. State Department employees that whilst US policies can change, their values never do.

When it comes to developments in Sino-US relations, we cannot be too pessimistic or optimistic. Both sides should seize their opportunities and address their challenges to forge a new type of major power relations.