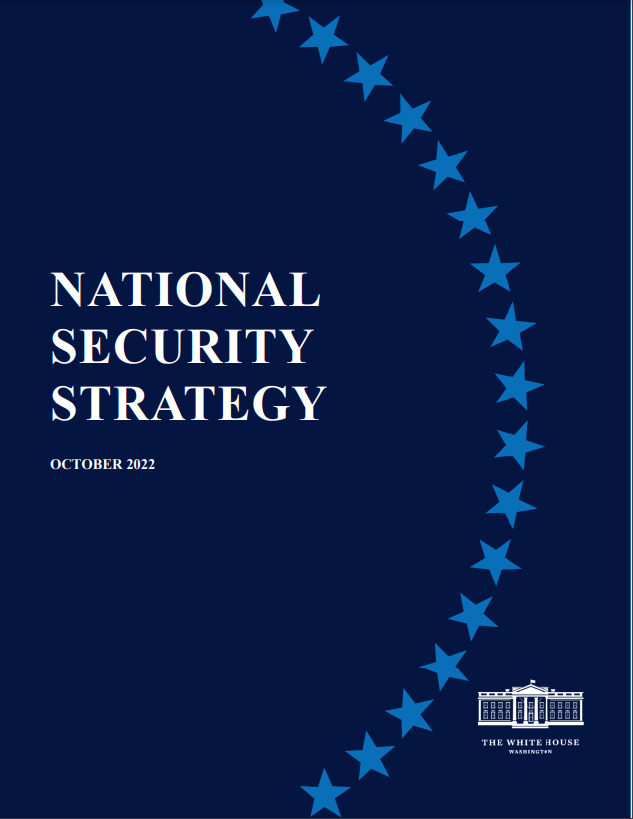 Halfway through its presidency, the Biden administration has finally published its National Security Strategy (NSS)—a document mandated by Congress from every administration. Not surprisingly, China is a central subject in it.

While not as hard-edged in language as the Trump administration’s NSS and its confrontational China policies, the Biden NSS nonetheless still shares much in common with the Trump administration’s assessments of China and the threats the PRC presents to the United States and American interests around the world. If there are differences between the Trump and Biden approaches to China, it is that the Biden administration’s tactics are more nuanced and sophisticated, more strategic and global, less caustic but more ideological, and better knit together the domestic and foreign elements to push back against the challenges and threats posed by China.

A number of elements of the Biden NSS were foreshadowed by Secretary of State Antony Blinken’s May 26 rollout of the administration’s China policies.

As with the Blinken speech, one weakness is that the NSS fails to identify or explain a positive vision for China’s behavior and U.S.-China relations. The document is long on criticisms of China’s negative behavior—and for good reason (as there is much of it). But both documents would have been enhanced if the valid criticisms had been coupled with a positive vision and roadmap for improved Chinese behavior, which would be conducive to a stable and productive U.S.-China relationship. Both documents do note that there are a [very] limited number of policy areas where Washington is prepared to cooperate with China, e.g., the NSS states: “We will always be willing to work with the PRC where our interests align.” Cooperation on climate change, pandemics, and nuclear non-proliferation are specifically mentioned. While this is positive, it is not the same thing as describing a comprehensive vision of the type of China that is in American (and global) interests. As a result, the Chinese people are only given a laundry list of American complaints (however valid they are), but without a positive vision of the type of Chinese system and behavior that would be more conducive to a stable and productive relationship with the United States and the world.

The Biden administration’s NSS includes a number of key judgments and assertions that explicitly affect China.

Yet, the NSS goes out of its way to distinguish the differing challenges that Moscow and Beijing present to the United States. Russia is singled out not just as a competing major power, but as an “immediate threat” for “recklessly flouting the basic laws of the international order, as its brutal war of aggression against Ukraine has shown.” With reference to China, though, the document states: “The PRC, by contrast, is the only competitor with both the intent to reshape the international order and, increasingly, the economic, diplomatic, military, and technological power to advance that objective…Beijing has the ambitions to create an enhanced sphere of influence in the Indo-Pacific and to become the world’s leading power [emphasis added].”

Second, a centerpiece of the NSS (and the overall Biden administration’s worldview) is the alleged political systemic competition between democracies and autocracies. This is a very ideological framing, reminiscent of the Cold War. However accurate it is vis-à-vis China (given China’s heavily repressive illiberal system), it is overly simplistic to divide the world into two competitive political camps of democracies vs. autocracies (simply because there are a variety of each type). To its credit, the NSS does state that the Biden administration “[does not] believe that governments and societies everywhere must be remade in America’s image.” It also states that they “want to avoid a world in which competition escalates into a world of rigid blocs.” But it then leans into a harsh critique of the range of “revisionist,” “aggressive,” “coercive,” and other “illiberal” behavior that autocratic states (naming Russia and China specifically) practice.

By contrast, the NSS repeatedly states that the Biden administration’s priority “vision” and “goal” is to create a “free, open, prosperous, and secure international order.”

The NSS goes further to elaborate the range of challenges China poses to the United States. It states unequivocally: “This [National Security Strategy] recognizes that the PRC presents America’s most consequential geopolitical challenge.” As noted above, the NSS states that China is unique in its intent and capabilities to “reshape the international order.” As such, the NSS affirms this is a struggle not just between the two competitive powers, but one for the systemic shape of the international system. Therefore, in this respect, from the American perspective, it is now Cold War 2.0. Xi Jinping’s recent speech to open the 20th Party Congress provides evidence that he (and China) sees it the same way. Analysts who neglect this systemic and ideological dimension to U.S.-China competition are missing a key element.

Finally, the NSS lays out a tripartite strategy for dealing with the myriad challenges that China poses. They are simply described as “invest, align, compete” (these adjectives and this strategy were foreshadowed in Secretary Blinken’s May speech noted above):

1) to invest in the foundations of our strength at home – our competitiveness, our innovation, our resilience, our democracy, 2) to align our efforts with our network of allies and partners, acting with common purpose and in common cause, and 3) compete responsibly with the PRC to defend our interests and build our vision for the future.

The NSS also contained unvarnished criticism of China’s alleged human rights abuses: “We will hold Beijing accountable for abuses – genocide and crimes against humanity in Xinjiang, human rights violations in Tibet, and the dismantling of Hong Kong’s autonomy and freedoms – even as it seeks to pressure countries and communities into silence.” The language concerning Taiwan was boilerplate, including the statement “…we do not support Taiwan independence.”

In conclusion, it is useful to remember the importance of such published documents. First, they are a systematic and comprehensive statement of worldview and policies of the U.S. Government for all to see and read. They are thus an exercise in transparency. Second, they offer systematic policy guidelines for the U.S. Government bureaucracies (with budgets associated with various elements). China (as well as others) would do well to carefully read—and reflect on—the content of the Biden National Security Strategy. It took 21 months to prepare and produce; it is not a frivolous document.

U.S. China PolicyNational SecurityU.S.-China Rivalry
printTweet
You might also like
Back to Top
CHINA US Focus 2022 China-United States Exchange Foundation. All rights reserved.