About Time: The Biden Administration Rolls Out Its China Policy 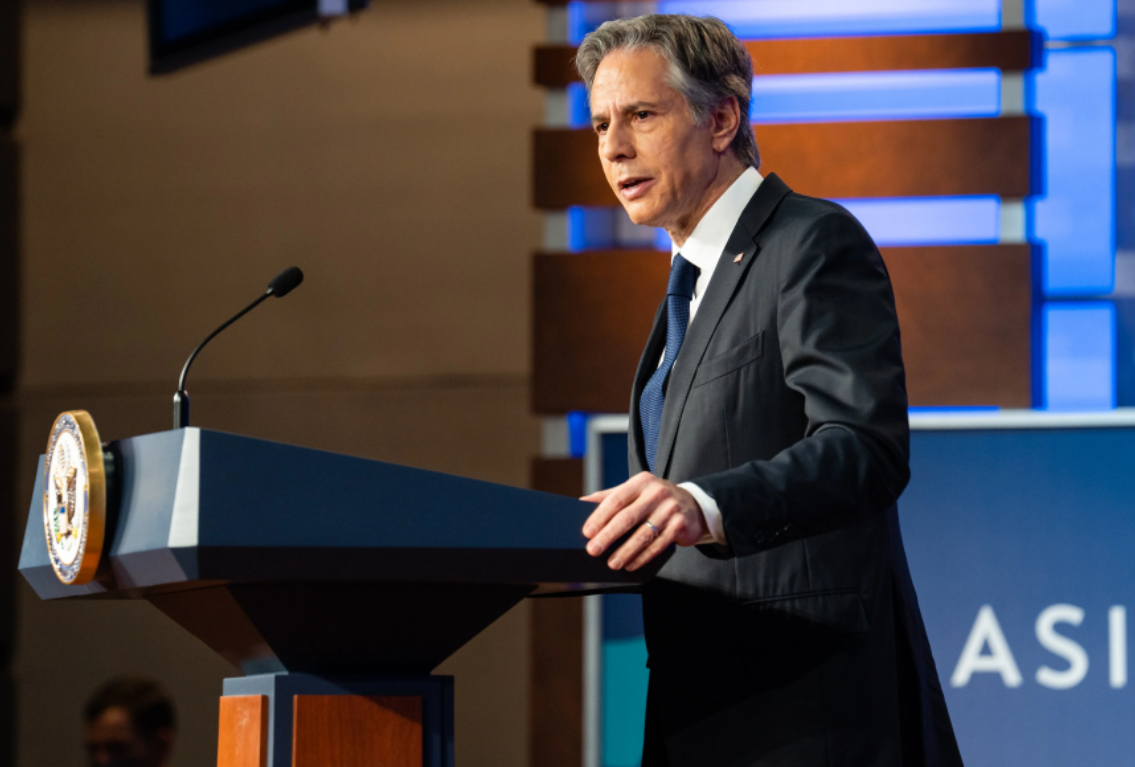 U.S. Secretary of State Anthony Blinken made a a speech on U.S.-China policy at George Washington University on May26, 2022. (Photo: Bloomberg)

Sixteen months after entering office, a senior Biden administration official finally gave a major public speech outlining the administration’s overall approach to China. The speech by Secretary of State Antony Blinken was sponsored by the Asia Society and took place on my campus at George Washington University (I was in the audience).

In listening to his smoothly-delivered speech in person and reading it carefully afterwards, what strikes me the most is that nothing new was said by Secretary Blinken. It was primarily an assemblage of previous administration statements and “talking points,” although the first time in one speech or official document. In that regard it was a letdown.

Also striking was that Blinken spent at least half of the speech reiterating general U.S. foreign policy and the Biden administration’s agenda for domestic technological renewal—not about China per se. Granted, domestic technological element is about competing with China, but one wonders why it was featured so prominently in this speech?

Notably missing was any discussion of what kind of China the United States would like to see and welcome—domestically, regionally, and globally? What kind of China would be easier (than the Xi regime) for the United States to work with? Blinken did discuss areas of potential cooperation on specific issues with China—but that is different from enunciating a positive vision for China’s evolution at home and abroad. To be sure, much about China’s behavior in recent years is very negative and destabilizing, and Beijing deserves to be called out on its malign behavior. Thus it may be difficult to offer a positive vision for China’s evolution and the relationship when the Xi regime and its policies seem so deeply entrenched.

Also striking by its absence was any discussion of strategy—as distinct from policy issues. Secretary Blinken ticked through a long and familiar list of policy issues and American complaints about Chinese behavior—but where is the integrated strategy for dealing with them? Perhaps in the classified version of the speech (the speech was billed as a shorter public version). But Blinken’s stated trilogy of “invest, align, compete” hardly equates with an integrated and sophisticated strategy.

If there was a conceptual centerpiece in the speech it was that Blinken and the Biden administration clearly view China as a revisionist power attempting to undermine and reshape the post-World War II liberal international order, and that the United States—together with its democratic allies—are going to resist it. Blinken stated:

“China is a global power with extraordinary reach, influence, and ambition… China is the only country with both the intent to reshape the international order and, increasingly, the economic, diplomatic, military, and technological power to do so. Beijing’s vision would move us away from the universal values that have sustained so much of the world’s progress over the past 75 years.”

Surprisingly, Blinken refrained from painting China as a regional revisionist in Asia. Yet, he said: “We can’t rely on Beijing to change its trajectory. So, we will shape the strategic environment around Beijing to advance our vision for an open, inclusive international system.” But, other than brief mention of AUKUS, the Quad, the recent U.S.-ASEAN Summit, and President Biden’s recent visit to the region, there were no specifics concerning how the U.S. will go about countering China in Asia. Similarly missing and notable by its absence was any discussion of how the United States plans to push back against China across the Global South, or U.S.-European transatlantic solidarity viz China.

When he came to discuss China’s behavior in a variety of areas, Blinken was appropriately candid—but not nearly as caustic, ideological, or insulting as previous Trump administration officials. Some examples:

●  “We have profound differences with the Chinese Communist Party and Chinese Government. But those differences are between governments and systems—not between our people.”

●  “The United States stands with countries and people around the world against the genocide and crimes against humanity happening in the Xinjiang region, where more than a million people have been placed in detention camps because of their ethnic and religious identity.”

●  “Tibet, where the authorities continue to wage a brutal campaign against Tibetans and their culture, language, and religious traditions.”

●  “Hong Kong, where the Chinese Communist Party has imposed harsh and anti-democratic measures under the guise of national security…. Beijing’s quashing of freedom in Hong Kong violates its handover commitments, enshrined in a treaty deposited at the United Nations.”

●  “We’ll continue to oppose Beijing’s aggressive and unlawful activities in the South and East China Seas.”

Blinken also spoke at length about American dissatisfaction with China in the areas of technology theft, forced technology transfer, corporate espionage, supply chain disruptions, mercantilist practices, unequal market access, prohibitions against American media in China, inequalities in film distribution, and other concerns in the commercial domain. Blinken was blunt about these inequalities: “The lack of reciprocity is unacceptable and unsustainable.”

He paired these criticisms of China with a clear warning to the American business community: “We believe—and we expect the business community to understand—that the price of admission to China’s market must not be the sacrifice of our core values or long-term competitive and technological advantages… We will work to ensure that U.S. companies don’t engage in commerce that facilitates or benefits from human rights abuses, including forced labor.” This was a much-needed message to deliver to the U.S. business community, but the longstanding behavior of corporate America suggests that Blinken’s warnings will not be heeded. In the U.S. corporate boardroom, profits trump values every time. This has to change. But it will require much more than one speech by the Secretary of State to do so.

Counterbalancing this tougher rhetoric, Secretary Blinken went out of his way to hold out the olive branch to Beijing: “As we invest, align, and compete—we’ll work together with Beijing where our interests come together.” He then reiterated the familiar litany of such areas of potential cooperation: climate change, COVID-19 and public health, nonproliferation and arms control, illegal narcotics, food security, and global macroeconomic coordination.

●  “We are not looking for conflict or a new Cold War. To the contrary, we’re determined to avoid both.”

●   “Competition need not lead to conflict. We do not seek it. We will work to avoid it.”

●   We don’t seek to block China from its role as a major power, nor to stop China… from growing their economy or advancing the interests of their people.”

●   “We do not seek to transform China’s political system.”

These are significant statements—whether Beijing will believe them is highly doubtful.  Indeed they are not widely shared in Washington.

Secretary Blinken also went out of his way to speak positively about continuing to welcome Chinese students to study in America, while observing that: “We can stay vigilant about our national security without closing our doors.” Blinken also praised the contributions of Chinese-Americans while denouncing Asian-American racism and hate.

The section of Secretary Blinken’s speech concerning Taiwan was standard boilerplate verbiage. Unlike President Biden’s off-script unequivocal statement in Tokyo last week that the United States had a “commitment” to “militarily intervene” to defend Taiwan in the event of an attack from mainland China, Blinken made no such provocative statements. Rather he reiterated the liturgy of the One China Policy, Taiwan Relations Act, three joint communiques, and Six Assurances. He also explicitly warned: “We do not support Taiwan independence”—which was an important restatement of policy to make. Blinken did, however, accuse Beijing of “growing coercion” against Taiwan, and voiced concern over the potential dangers of an “unintended conflict.” To this end, he said that “We’ve prioritized crisis communications and risk reduction measures with Beijing.” This has been a priority for the Biden administration—but thus far Beijing has shown little to no interest in such mechanisms.

In sum, Secretary Blinken’s speech was long overdue, and is to be welcomed. As Blinken himself said in closing: “The scale and scope of the challenge posed by the People’s Republic of China will test American diplomacy like nothing we’ve seen before.”

Having laid out the lengthy list of policy challenges which China presents to the United States (and many other nations)—next comes the hard part: fashioning an integrated strategy to deal with them.