The China Blame Game is Putting Innocent People at Risk 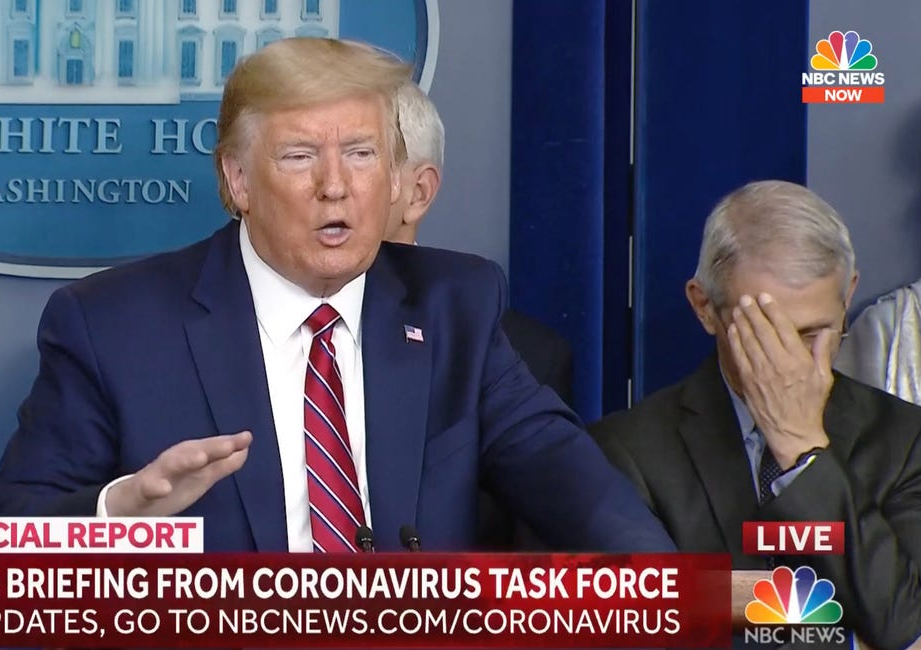 Dr. Anthony Fauci, the director of the National Institute of Allergy and Infectious Diseases, conceals his face as President Donald Trump uses the term "Deep State Department" during a coronavirus press briefing on March 20.

A stealthy, highly-contagious virus has caused a precipitous drop in the US stock market and sent shudders through a stalled economy. With factories and stores closing down, lights being dimmed from Broadway to Las Vegas, and hospitals being overwhelmed with critically ill patients, the American mood is confused, resentful, and laced with fear. Lockdowns of hard-hit areas and shelter-in-place orders for major cities are essential to containing the outbreak but add to the growing psychological stress.

Sadly, what often arises in reaction to disaster is scapegoating. After the devastating Great Kanto earthquake of 1923, for instance, ethnic Korean residents of Tokyo were rumored to be a cause of trouble and were massacred in the thousands. The punishing economic conditions of Germany after World War I are frequently cited as a key factor leading to the rise of anti-Semitism so toxic and pervasive it led to genocide.

There is hardly a nation left on earth that has not been hit with the novel coronavirus, COVID-19, so international cooperation is essential. However, the tribal fears invoked by border barriers, lockdowns, shutdowns, and quarantines have put the interconnected, relatively barrier-free world of globalization on the defensive. Thousands of jets have been idled, trains run empty, highways are free of cars while the world’s great tourist sites are ghost towns.

Though there is a documented benefit to be found in social distancing and reduced flow of traffic, the erection of draconian border controls, travel shutdowns, and the rise of physical barriers have been mirrored by doors closing in the mind and in the imaginations of worried people everywhere.

Only scientists can definitively answer questions about the origin of COVID-19, but the city of Wuhan is indelibly tied to public awareness of the disease because the first wave of the epidemic erupted there. Leaving aside the thorny question of where the microscopic coronavirus came from, except to note that most scientists consider it to have been a freaky but otherwise natural zoonotic transfer of virus from animal to man, the blame game can wait for later.

Wuhan was the first city to hit by the microscopic invader on a massive scale. With over 3,000 dead, tens of thousands ill, and millions more confined to their rooms for the time being, the suffering and anguish has been palpable.

Yet the regrettable human tendency to discriminate quickly gelled and took root, and soon people around China became wary of compatriots from Wuhan. By the same weak leap of logic, when the disease spread from China to Thailand, Japan, South Korea, and other neighboring countries, the world began to turn a jaundiced eye to China.

It’s not fair. Scientists and medical doctors know that better than anyone else, but politicians have their agendas, and popular prejudice cannot be waved away with a magic wand. That’s why international organizations such as WHO called on experienced medical professionals to assign a name to the disease that did not reflect on race or location.

COVID-19 is not a catchy term, but it contains information about the year of outbreak and the categorization of the illness as a coronavirus.

By the time the official moniker was coined, the more general term “coronavirus” was in such widespread use that it has remained the default term for describing the novel coronavirus. Even if it lacks the precision of the official name, it is unobjectionable in social terms.

However, far from China’s shores, other names were being concocted to describe the perilous pathogen, and terms like “Wuhan flu” and “Wuhan coronavirus” (which was used by the New York Times) began to be bandied about. US Senator Tom Cotton from Arkansas has made statements throughout the crisis designed to inflame and arouse anti-China sentiment by blaming China for the virus. Although Cotton’s hatred for China pre-dates the outbreak and is rooted in a rigid anti-communist worldview, he has exploited the epidemic by conflating his political enemy with the hated virus.

Despite the incendiary rhetoric of a few hot heads, references to the virus designed to indict China as a co-conspirator faded in February, and the mainstream press, The New York Times included, was careful to stick to the scientific term COVID-19 or the more general term, coronavirus.

But in early March a new wave of stigmatizing language entered the national dialogue by close associates of President Trump. Manipulative populism and playing to the hidden prejudice of a conservative political base came into play. It was no longer loud-mouth radio hosts and redneck politicians talking that way; rather, the rhetoric was being adapted by our nation’s highest-ranking officials to score political points against foes real and imagined and as such is not as easily dismissed.

America’s top diplomat, Secretary of State Mike Pompeo, started to use the terms “Wuhan virus” and “Chinese coronavirus” in official statements in the first week of March, giving political cover to closet racists anxious to pin blame on China. He continues to use the term, inflaming discussions at G-7 and other international forums.

President Donald Trump’s two-month long pretense that the virus was nothing more than the common flu was finally shaken by an undeniable outbreak in the US. Unwilling to take blame, he found it useful to deflect criticism away from his own negligence by making withering use of the term “foreign virus”. This incendiary term came short of tagging China directly, but by then, the narrative of presumptive guilt had been well-established, and his own supporters were bad-mouthing China with increasing frequency.

COVID-19U.S. China PolicyU.S.-China Rivalry
printTweet
You might also like
Back to Top
CHINA US Focus 2021 China-United States Exchange Foundation. All rights reserved.