During their three decades of reign, Philippine liberals failed the People Power Movement, by fostering the fortunes of the oligarch dynasties.

By 2016, drugs were killing the poorest neighborhoods, corrupting politics and giving rise to “narco-generals.” That is, until Rodrigo Duterte’s landslide election win, which survived U.S. regime change efforts.

Despite pandemic devastation, the Philippine economy is expanding. As the government has eased foreign investment rules, growth prospects could become more robust. Duterte enjoys higher trust in the country than any other Philippine president. The Marcos-Duterte campaign will build on policy continuity and consolidation.

Despite legal and political ploys against his campaign and assassination threats against his life, ex-senator Ferdinand Jr. “Bongbong” Marcos, the son of the controversial ex-president (1965-86), has fostered his lead in the presidential polls (currently 57% of total). (Figure 1) 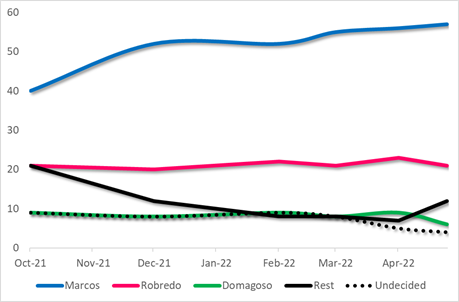 After the 2016 meltdown of the Liberal Party (LP), its aging stalwarts have promoted “Leni” Robredo (23%), the incumbent vice president. Other candidates attract only marginal support. As the share of the undecided has shrunk, Marcos is the effective winner, assuming no last-minute political drama.

The Marcos-Duterte campaign enjoys regional dominance. As the former governor of Ilocos Norte province, Marcos has a strong foothold in the north. Duterte dominates the south. And both are highly popular in Metro Manila.

Only foul play could change the expected outcome. And there are real concerns about the integrity of the Commissions on Elections (Comelec) and its election technology, which suffered a huge data breach in January that could affect the election. Odd links prevail between billionaire investor Soros’s Open Society initiatives, funds, Comelec and its election software (Smartmatic).

Leni Robredo has hoped to re-rebalance Manila toward Washington. In this quest, she is supported by ex-Supreme Court Justice Antonio Carpio, the proponent of the “West Philippine Sea,” and ex-foreign secretary Albert Del Rosario, a millionaire businessman. They are the key players of the liberal anti-China coalition.

The efforts have been fostered by Del Rosario’s “think-tank” ADRi. whose parent Stratbase is linked with the U.S.-based Bower Group Asia and the Center for Strategic and International Studies (CSIS), funded by the big defense contractors. Since mid-2021, ADRi has tried to “make China the issue of 2022.”

When Rosario served as foreign secretary, the Philippines filed the arbitration case against China. It was followed by the 2014 Enhanced Defense Cooperation Agreement (EDCA), which reopened the country to U.S. military, ships, and planes.

Today, the US-Philippines Visiting Forces Agreement (VFA) is back in effect, thanks to Carpio, Rosario and oligarch support. Last fall, the Philippines agreed to hold over 300 military activities with the U.S. in 2022.

Setting aside patriotism vows, Del Rosario and his business associates in mining and oil extraction could gain hugely from concession rights in the South China Sea.

Effectively, Robredo’s campaign is something of a proxy effort. It is supported by a set of media that portray themselves as “independent,” yet are funded by the National Endowment for Democracy (NED), which is financed largely by the U.S. Congress.

According to the NED database, several media outlets have received funds in the past 3-5 years, around $330,000-$430,000 each, including Rappler, the Center for Media Freedom and Responsibility (CMFR), the Philippine Center for Investigative Journalism (PCIJ), and to a lesser degree Mindanews. They make up only $1.3 million of NED's total Philippine awards ($6.8 million). But since local per capita incomes are less than 5% of those in the U.S., the funds provide jobs to hundreds.

Some $4.5 million of the NED total goes to non-media organizations, including the “Young Leaders for Good Governance Fellowship” (YLGGY), which has netted $300,000. It is a program of the Jesse Robredo Foundation, which honors Robredo’s late husband and is controlled by her family members. However, in the U.S., the YLGGY is promoted as a project of the International Republican Institute (IRI), one of the NED's four subsidiaries. It is thus not entirely clear whose national interest the YLGGY is supporting. Despite stated transparency, these organizations and their money flows are clouded by murkiness (Figure 2). 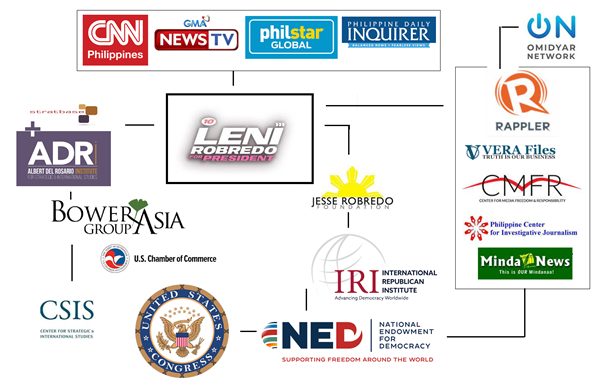 U.S. government funds are just a part of the proxy monies. Rappler has been financed by the secretive billionaire Pierre Omidyar, a supporter of “pro-democracy” regime-change.

In addition to media exposure by the NED-funded media outlets, the Robredo campaign has been promoted by other major media owned by local oligarchs, such as CNN Philippines, Philippine Star, Philippine Daily Inquirer, and so on.

Oddly, the campaign has also benefited from controversial ties with the far-left insurgents waging decades-long war against the Philippine government.

In 2017, Forbes reported that President Duterte will force the Philippines into China’s debt slavery and bankrupt the economy by 2022. Portrayed as an “independent” geopolitical risk analyst, the author Anders Corr claimed that “new Philippine debt of $167 billion could balloon to $452 billion.” It would push “Philippines’ debt-to-GDP ratio as high as 296%, the highest in the world.” Expensive loans from China would subject the country to “virtual debt bondage.”

At the time, I argued that Corr’s prediction was not based on economic realities. Since then, the pandemic devastation has caused debt levels to soar worldwide. Yet, the Philippine debt-per-GDP is 60% of GDP. Corr’s prediction was off by 240 percentage points and China’s role in the external debt is less than 5% (Figure 3). 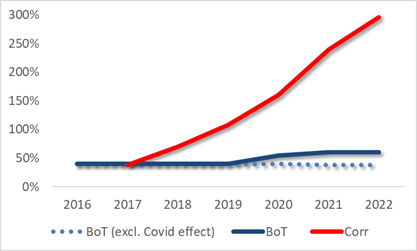 Yet, the moral of the story is that Corr’s prediction was quoted widely; not just by the NED-media, but even by reputable international media (Bloomberg, Fox, CNBC, New York Times, Nikkei Review, Al Jazeera, and UPI) which knew fully well that Corr had served years in U.S. military intelligence and was linked with the Pentagon and defense contractors.

In the Philippines, external media obfuscation has been the norm through the Duterte era since 2016, and particularly through the campaigns.

Instead of geopolitics, Bongbong Marcos and Sara Duterte hope to consolidate the president’s “Build, Build, Build” infrastructure initiatives, while promoting investment on human capital and healthcare. They plan to prioritize the industrial, agricultural and tourism sectors to create more jobs.

In foreign policy, Marcos and Duterte would retain military ties with the United States, but continue to recalibrate the economic relationship with China, which has become the Philippines’ largest trading partner, the second largest foreign investor, and the second largest source of foreign tourists.

Marcos and Duterte support Philippine interests in South China Sea but also the ASEAN talks with China hoping the bilateral regional Code of Conduct (COC) would be completed soon. The two shun the kind of rearmament drives that the liberals promote. Nor do they support the AUKUS nuclear weaponization that the U.S., UK and Australia push.

The big question is whether the Philippine future will be driven by military pacts, which benefit just tiny economic elites, or peaceful development, which fosters the living standards of ordinary Filipinos. Rising prosperity is only viable through peace and stability.

China-Philippines RelationsGeopoliticsGeoeconomicsSouth China Sea
printTweet
You might also like
Back to Top
CHINA US Focus 2023 China-United States Exchange Foundation. All rights reserved.