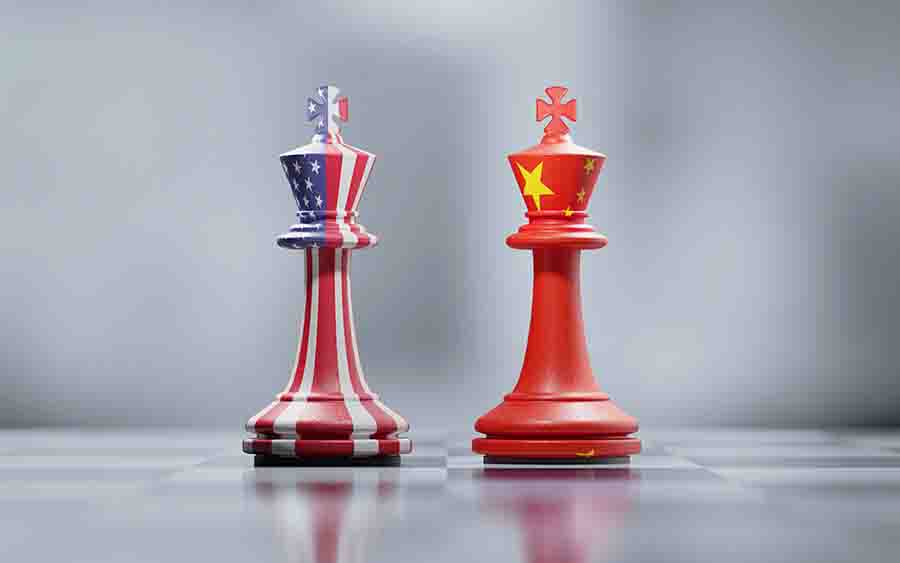 On top of failing to ease strained relations between China and the U.S., the global outbreak of COVID-19 has actually made things worse.

As the U.S. presidential election draws near, Secretary of State Mike Pompeo delivered a series of anti-China screeds, including a statement on the South China Sea, a speech at the Richard Nixon Presidential Library and a speech before the Senate Foreign Relations Committee. He seems determined to push China-U.S. relations into the abyss of a cold war.

Are the U.S. and China moving inevitably into a cold war? The answer, of course, is no. But we must not lose sight of the serious risk.

Against the background of severe deterioration in relations, three major factors could lead the two countries into a new cold war: first, decoupling; second, a confrontation of political systems and ideology; and third, a military conflict.

For quite some time, the hawks in the U.S. have been pushing for decoupling with China in the fields of economy, trade, science, technology, and people-to-people exchanges. They want to steer the two into mutual economic and social isolation, the same as developed between the U.S. and the USSR.

This, however, will also be hugely damaging to the U.S., and there is substantial opposition in the U.S. The Chinese strategy should be to persist in reform and opening-up, try its best to sustain all kinds of cooperation and exchanges with the U.S. and strive to gradually develop a benign kind of competition on the basis of international rules. That will be the best way to thwart the American hawks’ decoupling attempts.

Over the past three years, competition and friction between China and the U.S. have rapidly expanded into various fields but stopped short of confrontation. Recently, the American hawks have gone all out to boil China-U.S. competition down to an ideological contest and have attempted to push it to zero-sum and confrontation. China will not be fooled. It should be China’s unswerving policy to not export its social system or ideology nor engage in an ideological confrontation with the U.S. but to strive for the peaceful coexistence of the two social systems. This will play an important role in preventing a new cold war.

At present, the most likely risk or trigger is a military conflict. Over the past two years, military movements and frictions in the Taiwan Strait and South China Sea have risen sharply. If a crisis breaks out, it will be extremely difficult to manage and control. If a military conflict occurs, no matter how limited it might be, it will open the door to a protracted cold war.

The Taiwan question bears on China’s core interests. In recent years, with the expansion of separatist elements in Taiwan, the central government has steadily strengthened its stance against Taiwan independence. It has enhanced its military posture against pro-independence forces by warning of dire consequences.

However, the U.S. and China have sharply different views of the administration of Taiwan leader Tsai Ing-wen. Her party, the DPP, has an independence agenda. Moreover, the U.S. Congress adopted a number of Taiwan-related acts, seriously violating the one-China principle to which America had agreed and requiring the U.S. government to elevate its relations with Taiwan and strengthen its defense capability.

At present, both countries have significantly increased their military activities in the Taiwan Strait, and the possibility of a military crisis or conflict due to miscalculation or accidental fire has risen palpably.

But there is an even greater risk: If the pro-independence forces in Taiwan and foreign interlopers blatantly cross the red line set in China’s anti-secession law, China will be forced to resort to non-peaceful means, including military force, to prevent a split. In such a situation, China and the U.S. could be plunged into a serious military conflict, or even all-out war.

Frictions in the South China Sea occur mainly over American military reconnaissance near Chinese shores, increased freedom of navigation operations in waters surrounding Chinese islands and reefs, large-scale joint military exercises with allies in the area and open involvement and interference in China’s sovereignty disputes with its neighbors. In his recent statement on the South China Sea, Pompeo incited and intensified the maritime disputes between China and other countries in a blatant attempt to undermine China’s negotiations with ASEAN countries on a code of conduct aimed at stability.

Unlike the Taiwan Straits, the two sides’ bottom lines in the South China Sea are not clear. But their military aircraft and warships meet frequently and game each other fiercely, so the risk of an accidental incident is obviously higher.

In the high-risk period ahead of the American presidential election, if China and the U.S. want to avoid a military crisis or conflict in the Taiwan Strait or the South China Sea, strengthening crisis management is the only feasible way.

First, China and the U.S. should reopen, as soon as possible, the communication channels between the two militaries and diplomatic services. In particular, the hotline between the respective defense agencies should be fully tapped to notify each other and communicate the presence of various risks that might lead to a military confrontation.

Recently, U.S. Defense Secretary Mark Esper expressed his hope to visit China within this year to try and develop a crisis communication system. It was a positive signal. The two sides may wish to start with online communication and engage in consultations through the two embassies.

Second, the two sides must prioritize crisis prevention and avoidance. The maritime military security consultation mechanism, stalled because of the COVID-19 pandemic, should resume in the form of an online dialogue. The two sides should reaffirm their adherence to agreed codes of conduct for unplanned encounters at sea, including mutual notification of major military activities. The security of encounters at sea and in the air, including their annexes, should be included. They should also order their front-line officers and soldiers to act in accordance with those agreements.

Third, to prevent a crisis from escalating beyond control, the two sides should, in the event of a maritime emergency, immediately initiate and maintain on-site communication, have a high-level conversation through hotlines and dispatch special envoys for urgent consultations. Moreover, in managing a crisis, taking roughly equivalent military action, not escalation, should be the basic principle followed by both sides.

Fourth, after we move past the high-risk period preceding the U.S. presidential election, both sides should continue to make significant efforts to strengthen their security crisis management mechanisms.

New efforts should be made to seek agreement by political and and military leaders on the basic principles of crisis management, additional confidence-building measures for military security, resumption of the joint chiefs of staff dialogue and the launch of a strategic stability dialogue focusing mainly on strategic nuclear relations and covering the militarization of space, cyber-security and crisis stability. In this way, crisis management will become an important part of the military security dialogue, with potential hotlines between the respective military theater commands.

In short, in a situation where competition has seriously increased, China and the U.S. must stop themselves from falling into a cold war as a result of all-around decoupling, ideological differences or a military conflict. At present, the most urgent task is to strengthen crisis management to prevent military conflicts in the Taiwan Strait and the South China Sea.

During the U.S.-Soviet Cold War, crisis management was the only form of cooperation the two countries had available to avoid direct military conflict or war, especially a nuclear one. The current crisis management setup between China and the U.S. is very different. It represents a major effort by both countries — which are in a hybrid relationship of cooperation and increasing competition — to prevent a military conflict or war and avoid falling into the abyss of a cold war. Both countries and their militaries should take it seriously.