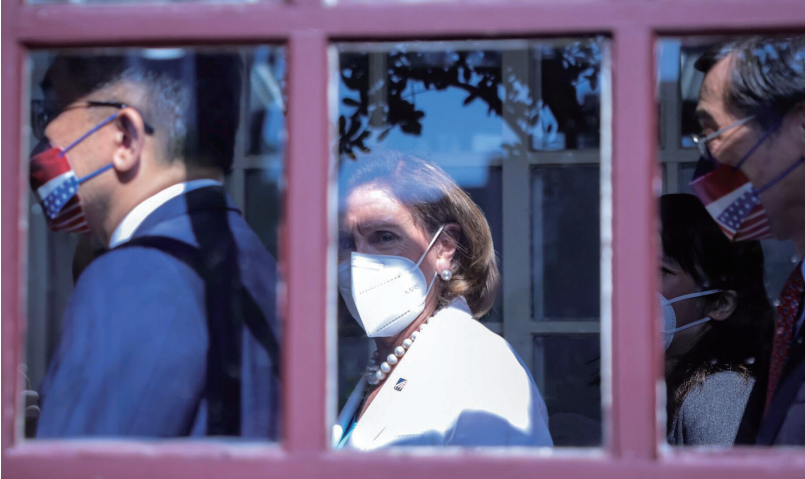 Speaker of the U.S. House of Representatives Nancy Pelosi arrives at the Legislative Yuan, Taiwan’s house of parliament on August 03, 2022 in Taipei, Taiwan. (Taiwan official handout)

The Chinese mainland responded with severe countermeasures, and the Biden administration threatened to react to those. Thus, severe tensions cannot be excluded over the next few months in the absence of proper crisis management. More important, a dangerous phenomenon — which can be called “Pelosi syndrome” — is overshadowing China-U.S. relations.

It’s not fair for the U.S. side to criticize China for “over-reacting.” Over the past few years, both the Donald Trump and Joe Biden administrations have taken steps with respect to Taiwan that are provocative to the mainland. Trump once sent a ranking official in his cabinet to visit Taiwan, and Biden has stated repeatedly that the U.S. would protect Taiwan militarily.

As the U.S. proceeds with its strategy of major power competition with China in recent years, it has quietly redefined its “one-China” policy. Today, its definition gives precedence to the Taiwan Relations Act over the three joint communiques the two governments signed, incorporating it into the “six assurances” it made to Taiwan. Not long ago, the Biden administration even deleted from the State Department website the expression “The U.S. doesn’t support Taiwan independence.”

From the Chinese perspective, the Pelosi visit wasn't an isolated incident. Rather, it reflects the U.S. side’s long-term strategic purpose of changing the status quo and containing China by playing the Taiwan card. Pelosi openly used the term “diplomatic relations” to describe exchanges between the U.S. and the Taiwan area in an article she wrote for The Washington Post.

Pelosi’s Taiwan trip was particularly provocative as it occurred as the People’s Liberation Army was celebrating the anniversary of its founding. As noted by Bonnie Glaser, senior fellow of the German Marshall Fund of the United States, Pelosi’s move eroded the political credibility of the U.S. government and further weakened Chinese confidence that the U.S. would be prudent in dealing with Taiwan.

The most damaging aspect of Pelosi syndrome is that the delicate check and balance between the executive and legislative branches of the U.S. government on Taiwan appears to have been disrupted. This will accelerate Taiwan’s transition from a hot spot to an explosive flashpoint in China-U.S. relations. On one hand, political forces in the U.S. each go their own way and so executive branch control over Taiwan-related policies has decreased. American politicians proposing tougher China policies may become even less willing to listen to the White House when it comes to Taiwan.

It is worrying that a Democratic president failed to prevent a House speaker of his own party from making such a disruptive move. On the other hand, the executive branch has itself been laissez-faire, even taking advantage of the crisis concocted by U.S. politicians as they attack China and accuse the mainland of escalating tensions. This pattern will make it even more difficult for the two governments to handle the Taiwan issue.

Pelosi syndrome shows that the disturbing impacts of U.S. domestic politics on Taiwan have grown conspicuously. The U.S. Congress is intensifying its efforts to grab the steering wheel of policy-making on Taiwan. Pelosi’s visit may make America’s China hawks even more rampant. Not only have some Democratic members of Congress applauded Pelosi’s visit but Republican Senate Minority Leader Mitch McConnell openly rooted for her.

Pelosi’s move has set a fresh, although mistaken, precedent. The next House speaker (possibly Republican House Minority Leader Kevin McCarthy) may visit Taiwan again. Pelosi didn’t hesitate to foment a significant crisis in China-U.S. ties in order to build her own so-called political legacy. Her move may become an inspiration for other members of Congress who may be more audacious in playing the Taiwan card and showcasing their anti-China, anti-communist stances for private political gain. 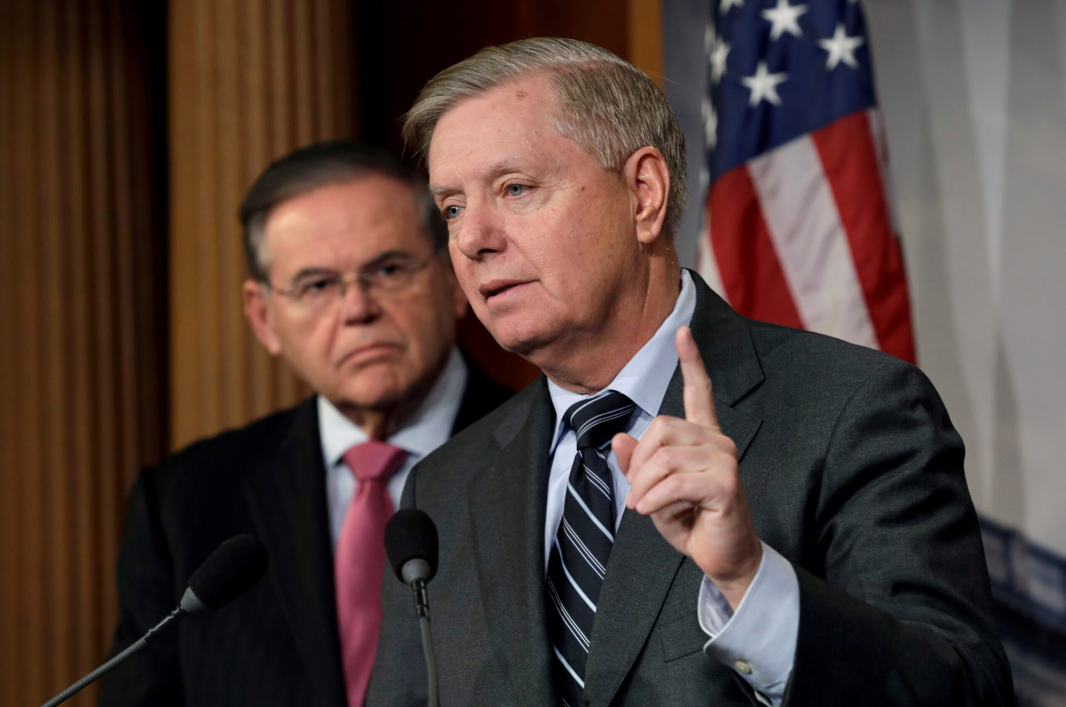 We should see that behind Pelosi’s trip is a rising pro-Taiwan tide inside the U.S. Congress, fueled in part by the Russia-Ukraine conflict. Some members of Congress deliberately conflate the Russia-Ukraine conflict and the matter of Taiwan, hyping an alleged “China threat” by binding China and Russia together to benefit the U.S. military-industrial complex and their own constituencies. People such as Republican Rep. Mike Gallagher claim that the Russia-Ukraine conflict will amplify the Chinese mainland’s “copycat effect” and increase the likelihood of reunification with Taiwan by means of force. The U.S. strategy of “integrated deterrence” may not suffice for deterring action by the Chinese mainland, so members of Congress have also proposed a series of pro-Taiwan bills. In particular, Bob Menendez, the Democratic chairman of the Senate Foreign Relations Committee, together with Lindsey Graham, the Republican Ranking Member of the Senate Committee on the Budget (he also sits on the Appropriations and Judiciary committees), are pushing the Taiwan Policy Act of 2022, which would integrate the Taiwan Partnership Act and Taiwan Security Enhancement Act proposed by other members of Congress. This threatens to reshuffle U.S. Taiwan policy.

The Taiwan Policy Act requires the U.S. government to implement a series of new provocative measures, such as renaming the Taipei Economic and Cultural Representative Office in the United States as the Taiwanese Representative Office, which would give Taiwan a position as a major non-NATO ally. The Taiwan Security Assistance Initiative would deepen relations between the U.S. National Guard and Taiwan’s military and incorporate Taiwan into the U.S.-proposed Indo-Pacific Economic Framework. Menendez said the Taiwan Policy Act would send a clear message to Beijing not to make the same mistakes with Taiwan that Vladimir Putin has made in Ukraine. However, his arrogant, tough talk, as well as the act itself, could prompt Beijing to take more resolute measures.

China and the U.S. have sunk into a typical security dilemma, and a new normal is emerging in the gaming between the two militaries in waters off Taiwan. The Chinese side has made a strong military response, and in a counter show of strength, U.S. military vessels and aircraft may increase the frequency of movements through and over the Taiwan Strait. U.S. aircraft carrier strike groups may increase their presence near Taiwan. The U.S. is even considering joint military drills with Japan and Australia. Neither should the possibility be excluded that Taiwan authorities themselves could make some military moves. Under such circumstance, the risk of Chinese and U.S. militaries coming into an unintended conflict, or even direct confrontation, should not be underestimated.

To sum up, the serious negative influence of Pelosi’s Taiwan visit are fermenting. Even if Pelosi leaves the U.S. political stage soon, her legacy, Pelosi syndrome will continue to poison China-U.S. relations. U.S. domestic politics are turning U.S. policy regarding Taiwan into strategic confusion. This will inevitably increase the risk of China and the U.S. sinking into military conflict.