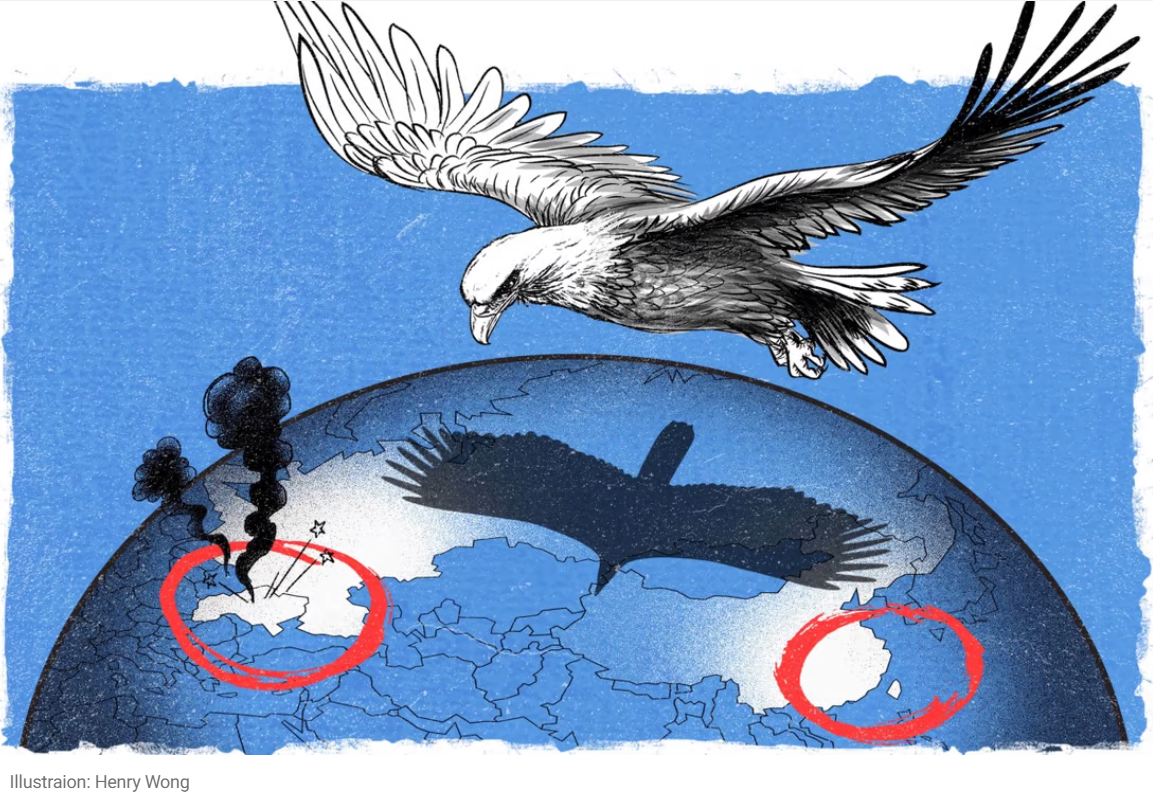 Two major global security hot spots — one in Europe, the other in Asia — are unexpectedly interwoven. The crisis in Ukraine is reshaping strategic thinking about Taiwan.

Years in the making, the Russia-Ukraine war broke out in late February as a result of the failure of the United States, Europe and Russia to manage growing tensions. The war, which endangers not only the region but the entire world order, has lasted more than two months now and shows no sign of abating.

How will that conflict influence conditions in the Taiwan Strait? Will military action also be seen there?

Since the war broke out, the phrase “Ukraine today, Taiwan tomorrow” is heard frequently in Taiwan, though the island’s authorities under Tsai Ing-wen are quick to emphasize difference. A stretch of ocean provides a natural barrier, for example, and then there is the island’s geopolitical position — hints that the U.S. would surely help defend it.

A survey by a Taiwan-based think tank found that more than 70 percent of respondents were concerned about the island’s policy of “resisting China and safeguarding Taiwan,” believing this will escalate cross-Strait tensions. It follows that the Tsai administration should strive to improve and stabilize relations with Beijing to prevent the two sides from slipping into the kind of crisis and war seen in Ukraine.

The same survey found a lower level of trust in the willingness of the U.S. to send troops for Taiwan’s defense if a military conflict were to break out.

The Taiwan authorities continue to walk an extremely dangerous path. It’s worth noting that they have not stepped back from the policy of “joining the U.S. to confront China.” They have instead redoubled their efforts to seek U.S. protection, asking to purchase more U.S. military equipment and carry out further official exchanges. This was seen in the invitation and reception in early March of Mike Pompeo, the pro-Taiwan former U.S. secretary of state. In addition, according to Taiwan media reports, the island’s military is actively planning joint drills based on lessons learned from the Russia-Ukraine war and is exploring ways to achieve “effective deterrence” against the Chinese mainland by developing ways to counterattack.

Worried — especially after the start of the Russia-Ukraine war — that its credibility might be damaged over the question of helping Taiwan defend itself, the Biden administration hurriedly sent a team of five former high officials, led by Michael Mullen, former chairman of the Joint Chiefs of Staff, to visit the island. Although their tune was a little different from Pompeo’s, they, too, expressed “firm support” for Taiwan. On their heels, a congressional delegation came to visit, and in early April the U.S. approved another package of arms sales to Taiwan, this one worth $95 million. It was the third sale since Biden’s inauguration. No matter how the U.S. tries to pacify and reassure Taiwan, damage to its credibility regarding Taiwan’s defense will be inevitable.

If the Russia-Ukraine war persists, the U.S.-Russia confrontation will escalate, weakening America’s confidence and capacity for suppressing China in the Asia-Pacific. By then, avoiding the creation of enemies and fights on two fronts may become an important U.S. strategic consideration. If it were to explicitly express opposition to Taiwan independence and help constrain the provocations of separatists, it may be possible to ease tensions and stabilize the Taiwan Strait.

But there may be another possibility: No matter how the war evolves, and assuming a direct U.S.-Russia military confrontation doesn’t happen, the U.S. will continue to make the Asia-Pacific its strategic center of gravity. America will continue to see China as its main strategic rival and will continue to play the Taiwan card to pressure China. This will not only make it difficult to ease tensions but will further worsen them.

The Russia-Ukraine fight has again fully revealed the mercilessness and destructiveness of war. Facing a real danger of war, the Chinese government will become more resolute in its determination to pursue peaceful reunification with Taiwan. The Chinese public will also show greater support for policies to achieve this. In fact, since the onset of reform and opening-up, the Chinese government has consistently said that peaceful reunification is in the best interest of people on both sides, as well as for the rest of the world. It firmly believes that time is on the mainland’s side.

On the other hand, the Russia-Ukraine war has clearly displayed the tremendous harm of Cold War thinking. It shows how dangerous it is to press a major country into a corner. The Chinese government will more resolutely demand that the U.S. forsake its Cold War thinking and change its misguided and dangerous practice of pressuring China by playing the Taiwan card. And it will maintain high vigilance against some U.S. and Japanese forces that will attempt to provoke a military conflict in the Taiwan Strait. For that, the Chinese government will further strengthen military deterrence against Taiwan separatists and others, and make sure its bottom lines on Taiwan are not crossed.

The Russia-Ukraine war has revived the Cold War in Europe. China has seen clearly that, along with the Korean Peninsula, the Taiwan Strait may be a fuse for a Cold War resurgence in the Asia-Pacific. To avoid such a risk, there is a pressing need for China and the U.S. to restore and enhance political and security dialogue, as well as crisis management. Chinese and U.S. defense chiefs recently held their first dialogue online since Joe Biden took office, which is belated good news. We hope this will open the door for dialogue at all levels, as well for exchanges between the two militaries, which will facilitate the management of security crises.

To sum up, the Russia-Ukraine war’s impacts on the Taiwan situation is multifaceted, complex and dynamic. It’s still too early to tell exactly what the end result will be. But one thing is clear: Only by learning correct lessons from the war can peace and stability in the Taiwan Strait be preserved. Since the U.S. claims it wants to preserve Ukraine’s sovereignty and territorial integrity, it should absolutely not interfere with Chinese sovereignty and sabotage Chinese territorial integrity in the Taiwan Strait.

Therefore, now and in the future, preserving peace and stability in the Taiwan Strait, requires the U.S., not China, to change its way of doing things. We wish the U.S. would return to the one-China principle and truly preserve the status quo affirmed by the three joint communiques of the two governments — i.e. there is only one China, Taiwan is a part of China and the government of the People’s Republic of China is the sole legitimate government of China. Only in this way can China and the U.S. rebuild constructive interaction on Taiwan so that conflict and war can be avoided. This is in both countries’ common and long-term interests.