The Tragedy of Ukraine’s Abyss: Three Decades of Misguided Geopolitics

In his TV address of February 24, Russian President Vladimir Putin denounced three decades of NATO expansion and broken pledges to Russia. Moscow did not intend to occupy Ukraine but wanted to “demilitarize and de-nazify" the country. As bombs exploded in several Ukrainian cities, Putin’s speech was discounted in the West, even as Facebook reversed its ban on users praising the Azov Battalion, a Ukrainian neo-Nazi white supremacist military unit.

In reality, Putin's address was not a rogue autocrat’s conspiracy fantasy.

A series of security assurances were given to Mikhail Gorbachev and other Soviet leaders against NATO expansion at the turn of the 1990s, as evidenced by declassified files posted online half a decade ago by the Washington-based National Security Archive.

Moreover, NATO expansion was widely condemned already on June 26, 1997, by a group of 50 leading U.S. foreign policy experts, including the architect of the Cold War Paul Nitze, in an open letter to President Clinton (Figure 1). With foresight, they warned it would undermine U.S.-Russian mutual trust and nuclear arms control. 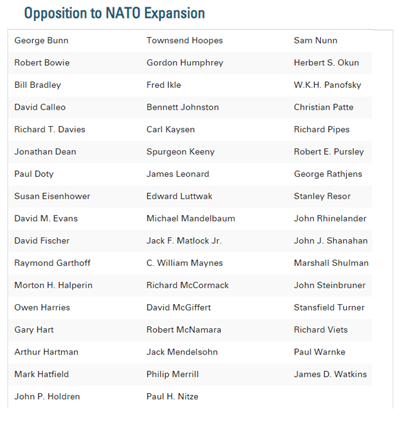 Another ironic outcome was the rejuvenation of the Ukrainian far-right, which entered an ominous phase last November, when Russia presented a motion in the UN against the “glorification of Nazism.” The overwhelming majority passed the resolution, which was opposed by the U.S., along with Ukraine and Canada.

It was a stunning reversal of official U.S. stance, yet perfectly aligned with U.S. covert activities since the postwar era. During World War II, Ukraine's far-right anti-Communist forces collaborated with Nazi-Germany. During the Cold War, they cooperated with Washington. Since the 2014 Ukrainian unrest and Russia’s annexation of Crimea, these clandestine networks, fostered by Western intelligence services, have been dominated by far-right, neo-Nazi and white supremacist paramilitaries, as evidenced by a recent study on the Ukrainian far-right by a U.S. watchdog on far-right extremism.

The U.S. has given overt and covert training, financing and arming to these groups. And since the mid-2010s, Ukraine has been the Mecca for far-right white supremacists from the West, as stressed by a West Point report.

Even as tensions have progressively escalated in the past half a decade, trade ties between Ukraine and China have steadily increased since President Viktor Yanukovych’s state visit to Beijing in 2013. Four years later, Ukraine, now under President Poroshenko, joined China’s Belt and Road Initiative (BRI). And in 2019, China bypassed Russia as Ukraine’s biggest single trading partner. Together, the two absorb a fourth of Ukraine's exports, over six times more than the U.S. (Figure 2). 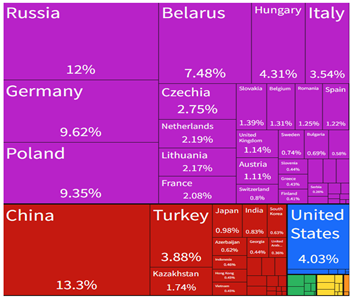 In June 2020, Chinese Commerce Minister Wang Wentao and Ukrainian Minister of Infrastructure Oleksandr Kubrakov signed a deal to strengthen cooperation in multiple areas, particularly in infrastructure financing and construction. And last year, overall trade boomed to $19 billion, having soared 80% since 2013. To Ukraine’s President Zelensky, the BRI meant an alternative future that would be more peaceful and stable. Or as he said in his phone conversation with President Xi Jinping, Ukraine might become a “bridge to Europe” for Chinese investments.

In just a year, major Chinese companies started operations in construction (CPCG, CHEC), food (COFCO) and telecoms (Huawei). Intriguingly, Huawei, which the U.S. has struggled to bury for a decade won the bid to install a 4G network in Kyiv’s subway and was selected in 2020 to improve Ukraine’s cyber defense and -security. Indeed, new contracts signed by Chinese companies in the Ukrainian engineering market exceeded $2 billion for two consecutive years.

But Washington did not perceive stability and development as an acceptable future for Ukraine. Hence, the U.S. penchant to ignore Russian pleas for diplomacy, Zelenskyy’s reconciliation efforts that were derailed by the far-right paramilitaries, the purposeful neglect of Austrian-style options for neutrality in the region and the fatal sanctions against Russia that will ultimately undermine global economic prospects.

The White House has opted for very different scenarios.

From 1991 to 2014, the U.S. flooded Ukraine with $4 billion in military assistance. Over $2.7 billion has been added since then, plus over a billion provided by the NATO Trust Fund, and all that is only a part of the NATO total. Even before the crisis, that inched closer to $10 billion. To Erik Prince, it was a great money-making opportunity, Iraq déjà vu.

As the founder of the private U.S. military contractor Blackwater (renamed Academy), Prince had long supplied mercenaries to the CIA, Pentagon and State Department for covert operations, including torture and assassinations. In early 2020, as Washington struggled to keep China and economic development out of Ukraine, Prince outlined a “roadmap” for the creation of a “vertically integrated aviation defense consortium” that could bring $10 billion in revenues and investment (Figure 3).

Figure 3      Blackwater, Prince and the $10 Billion Military Plan for Ukraine 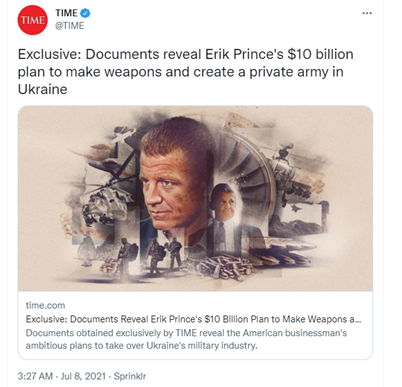 However, Prince needed the Motor Sich factory, which had a deal with Beijing Skyrizon Aviation. The Chinese company had bought its 41% stake already in 2017. Chinese investors hoped to invest $250 million in one of the largest advanced engine manufacturers for airplanes and helicopters worldwide.

Prince pushed his plan, with tacit support by his family, a powerful Republican dynasty; and his sister Betsy DeVos, Trump’s secretary of education. While the Trump administration urged Ukraine not to complete the sale to the Chinese, the 2020 election undermined the plan. Prince’s Ukrainian partners got under criminal investigation for alleged efforts to sway the 2020 presidential election and the investigation included President Biden’s son and his stakes in Ukraine. Meanwhile, Washington blacklisted the Chinese firm involved, then the Ukrainian court froze the holding for “national security” reasons and Chinese companies and dealmakers were sanctioned.

After Trump left the White House, the idea of the nascent military-industrial complex remains in both the U.S. and Ukraine, where the state-controlled sector employs more than 1 million people and has moved into increased military procurement since 2014.

Zelenskyy’s government sees the complex as “strategic.” It could serve the needs of the U.S., the Ukrainian state, its defense suppliers and their oligarch owners. As a platform, it could pave the way to the next regime change in the region. And it is located close to the Kremlin.

Global risks that were avoidable

In an interview done over 2 months ago, U.S. Army Colonel Douglas Macgregor predicted both the Russian invasion and its timing. The ex-Pentagon advisor also suggested U.S. policy was misguided and captive by “the war lobby” in America. Ukraine that remains “independent, sovereign, free… may or may not have anything to do with membership in NATO. But we haven’t been willing to consider that.”

Similarly, a highly-regarded U.S. foreign policy expert, Michael Mandelbaum, one of the original signatories of the 1997 protest against the NATO expansion, sees the current Ukrainian crisis as a logical outcome of “one of the greatest foreign policy blunders of America.”

Ukraine's shift toward a warfare economy has occurred at the expense of Ukrainians’ welfare. After the Cold War, Ukrainian living standards were not that different relative to Poland. By the end of 2021, they had fallen 60% behind those in Poland. Today, they are barely ahead of those in the war-torn Libya – another target of Western regime change.

What happens in Ukraine will not stay in Ukraine.

Ukraine CrisisGeopoliticsU.S.-Russia RelationsChina-Russia RelationsNATO
printTweet
You might also like
Back to Top
CHINA US Focus 2022 China-United States Exchange Foundation. All rights reserved.