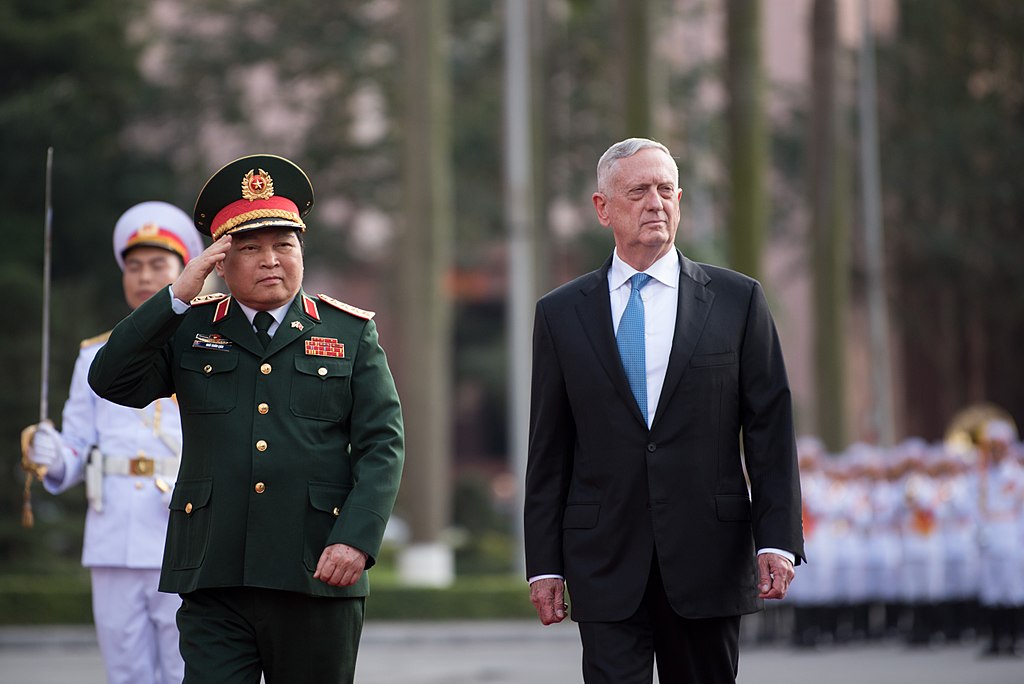 On October 16, US Defense Secretary Jim Mattis made his second visit to Vietnam this year. The message from the visit was loud and clear: The United States and Vietnam are committed to strengthening military and security cooperation. Many tend to consider the enhanced cooperation as Vietnam’s move to strike a balance between Beijing and Washington. In fact, the power structure in the South China Sea region remains unchanged, with the US’ “bilateral plus multilateral” and “allies plus partners” security structure still playing a dominant role in regional affairs and China’s influence on the regional security order still limited. The regional balance of power has not undergone any fundamental changes, but Vietnam’s security strategy seems to have been shifting, as shown by its increasingly closer security cooperation with the US.

Vietnam’s strategic shift began in 2014; that year was an important turning point in relations between China, the US, and Vietnam. In the first half of 2014, China and Vietnam had a series of disputes relating to the mega oil-drilling platform Haiyang Shiyou 981 in the waters of the Xisha Islands. Vietnam finally came to realize its gap with China in terms of maritime power, and resolve and will in carrying out oil exploration in the South China Sea and defending its maritime rights and interests. Also from that year, China began a massive island-building and engineering program in the waters of the Nansha Islands. This made the US and Vietnam nervous, and gave them an excuse to upgrade their military and security cooperation.

Under such a scenario, Vietnam’s military and security cooperation with the US could no longer be simply interpreted as seeking a “rebalance” between big powers such as China and the US.

To address challenges from China, it makes sense for Vietnam to move towards the US to offset its disadvantages in strength while competing with China. For the US, China’s moves in the South China Sea have challenged the existing power structure in the region, and Vietnam is the most suitable pawn for it to offset China’s strategic resources, divert China’s attention, and check China’s expansion of influence in the South China Sea and beyond.

With the US completely lifting its arms embargo on Vietnam in 2016, US-Vietnam military and cooperation has been developing at a fast pace. At present, from high-level meetings between the defense departments and the port calls by US aircraft carrier and naval ships at the Cam Ranh Bay and Da Nang, to a series of consensuses on the upgraded security and maritime cooperation, cooperation between the two nations progressed by leaps and bounds in the past four years.

The fast progress in their relations was the result of their common judgment about the growing “threat” from China, and was in particular a sort of reaction to China’s activities in the South China Sea, such as islet construction and arms deployment. It is worrying that their cooperation was strengthened along each step taken by China in the region. In other words, no matter what policies China may take regarding the South China Sea, the US and Vietnam would jump to the same conclusion: the China threat is growing. And the two countries would take this as an excuse to further strengthen their interaction in the military and security fields.

Closer military and security cooperation between the two will inevitably break the existing security framework in the South China Sea region. The ASEAN countries have long practiced the “balance of powers strategy”, and have gradually shifted towards the US amid China’s growing influence. Such a shift, however, was relatively limited, and a dynamic equilibrium has always been maintained. Vietnam’s strategic shift would undermine this.

Peace and stability in the South China Sea since the end of Cold War, to a great extent, should be attributed to the dynamic equilibrium among the regional powers as featured by ASEAN’s central role and the tussle among extraterritorial big powers. If Vietnam, in seeking bigger strategic interests and resources in the South China Sea, further shifts towards the US or even forms a sort of “quasi alliance” with it, the existing power structure and security pattern would be broken. Under such circumstances, it would mean turbulence and instability in the region, and all parties should stay vigilant against it.