A Community with a Shared Future Starts from the Asia Pacific 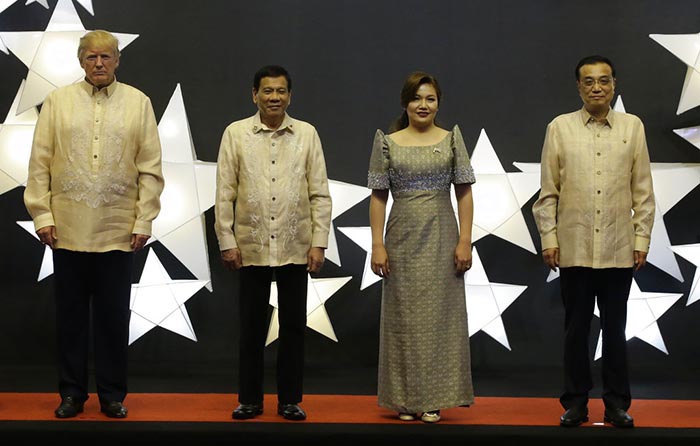 From left U.S. President Donald Trump, Philippine President Rodrigo Duterte, his partner Cielito Avencana and Chinese Premier Li Keqiang pose for a photo before the start of the Special Gala Celebration of the 50th Anniversary of ASEAN in Manila, Philippines on Sunday, Nov. 12, 2017. The gala marks the 50th anniversary of the Association of Southeast Asian Nations. (AP/Aaron Favila)

A community with a shared future for mankind can only be the product of further globalization. Its construction is the general trend of human development. The community will be a comprehensively systematic project covering, but not limited to, politics, security, economics, society, culture, and ecology. Should this community be built upon the United Nations, or a brand-new framework for global cooperation? This is not a question that can be answered at the current stage. Whatever the case, from concept-generation to entity-building, it has to be based on a regional organization or multilateral institution which is already in place.

Building this community is both a long-term goal put forward by China and its responsibility as a global power. The proposition of this goal marks a significant change in China’s relations with the outside world and its international strategic thinking. Such a community will not come from nowhere, but will require China to guide and coordinate it. At the Boao Forum for Asia Annual Conference in 2015, President Xi emphasized that “Facing the fast changing international and regional landscapes, we must see the whole picture, follow the trend of our times and jointly build a regional order that is more favorable to Asia and the world. We should, through efforts towards such a community for Asia, promote a community of common interest for all mankind.” During the APEC CEO Summit the following year, President Xi reiterated that “the vines of sweet potato may stretch in all directions, but they all grow out of its roots. Similarly, no matter what level of development it may reach, China, with its root in the Asia-Pacific, will continue to contribute to its development and prosperity. China is committed to peaceful development and a win-win strategy of opening-up. While striving for its own development, China will also work to promote the common development of all Asia-Pacific countries and create more opportunities for people in our region.”

To build such a community, China should start by cooperating with neighboring countries to create an Asia-Pacific community and then extend its efforts further to lay the foundation for a broader global community, with a shared future. There are several reasons for this.

First, as China’s economic success and growth started from the Asia-Pacific, its foremost security concerns are also in the Asia-Pacific. China’s reform and opening-up initially drew on the development experience of the “Four Little Dragons of East Asia,” as well as Japan. It then extended its economic relations to the entire Asia-Pacific, and then the world. In 2016, the Chinese mainland’s trade with other parts of the Asia-Pacific accounted for 58.7 percent of its global total. Eight of its top ten trading partners are in the Asia-Pacific region.

Peace and stability in the Asia-Pacific is important for China’s national unity, territorial integrity, and peripheral security. To be specific, the Taiwan issue has implications on China’s national unity and efforts at national rejuvenation. Additionally, the North Korean nuclear issue concerns China’s major security interests. China will not sit aside if the Korean Peninsula is engulfed in war and chaos. While China’s territorial and maritime disputes with several neighboring countries remain unresolved, we should be aware of the attempts of some major countries to use these disputes as hindrance to China’s rise.

Second, the Asia-Pacific’s importance is increasing constantly as part of the world economy, and in international security and global governance. By the end of 2016, the Asia-Pacific region was inhabited by 54.47 percent of the world’s population. According to some estimates, by 2020 the Asia-Pacific region will account for two-thirds of global GDP and half of global trade, demonstrating the emerging economic centrality of this region. By 2020, the region’s share of global military spending will likely have grown to nearly three-fourths. Major wars or strategic confrontations in this region, if they occur, could prove catastrophic. In addition, given the importance of the Asia-Pacific region, building and perfecting regional cooperation mechanisms in the region is indispensable for such global governance issues, such as eliminating the threats from terrorism and extremism, protecting the ecological environment, safeguarding public health, and cracking down on drug-trafficking and illegal immigration.

Third, in the past few decades, especially since the end of the Cold War, Asia-Pacific regional cooperation mechanisms and organizations represented by ASEAN have made great achievements. However, as of today, no existing regional cooperation mechanism in the Asia-Pacific is capable of engaging in the full spectrum of security, economic, political, cultural, and ecological matters, nor can they take the responsibility to build an Asia-Pacific community with a shared future. All of the existing regional organizations have limitations. The bilateral military alliances the U.S. has established with Japan, South Korea and Australia have not taken into consideration the security concerns of countries outside the U.S. security system. These alliances are adverse to mitigating the arms race in the region, and reducing strategic mutual distrust between China and the U.S. Under such circumstances, the necessary preconditions for building an Asia-Pacific community with a shared future are: designing a comprehensive and multi-dimensional cooperation mechanism in the Asia-Pacific that includes all regional countries, and conducting feasibility studies.

Leaders and strategists in many of the Asia-Pacific countries have proposed the concept of a regional community, such as the “East Asia Economic Group,” “New Pacific Community,” “Asia Pacific Community,” “East Asian Community,” and “Pacific Community.” Yet they haven’t put forward more specific proposals addressing things like the region’s geographical scope and organizational structure, which countries should be included, what their common goals are, and a timeframe for building the community.

The Asia-Pacific Community should serve to achieve the following objectives: 1) to deepen and institutionalize regional economic cooperation and integration, 2) to mitigate the increasingly intensive geo-strategic competition between China and the U.S., and improve relations among countries in the region, 3) to denuclearize the Korean Peninsula as soon as possible, and reinforce the commitment to nuclear non-proliferation, 4) to bolster commitment to peaceful settlement of territorial disputes and reduce the dangers of armed conflict and arms races, 5) to cope more effectively with nontraditional security issues and extremism and, 6) to promote civilizational dialogues, cultural exchanges, and jointly formulate shared values for the region.

Building an Asia-Pacific community must start with ideas. Currently, countries in the region differ considerably in defining and using the terms “Asia” and “Asia-Pacific.” During his Asia visit in November, U.S. President Donald Trump repeatedly mentioned the concept “Indo-Pacific region” as a possible replacement for “Asia-Pacific.” Some argue that the use of this term is planned by the U.S. and other countries with the intention of “lifting India and suppressing China.” Major countries in the area need to reach a basic consensus on the definition of the Asia-Pacific region.

Under current conditions, a relatively simple and feasible solution is to build a dialogue platform based on a certain (or a few) existing multilateral negotiation mechanism. Former Australian Prime Minister Kevin Rudd’s proposal to build a multilateral security mechanism on the basis of the East Asia Summit is a sensible one. The East Asia Summit composed of ASEAN countries, China, Japan and South Korea, as well as five other countries (the U.S., Russia, Australia, New Zealand, India) is quite representative, and has achieved significant progress in recent years.

Indo-PacificAsia-PacificChina-ASEAN Relations
printTweet
You might also like
Back to Top
CHINA US Focus 2022 China-United States Exchange Foundation. All rights reserved.