The China Dream of Liu Mingfu

“The great rejuvenation of the Chinese nation must go hand in hand with a rich and powerful army. In order to achieve this goal, China must dare to strengthen its military force, not just its economy.” 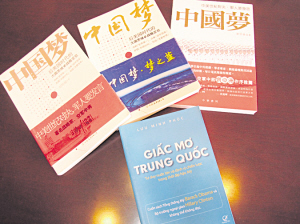 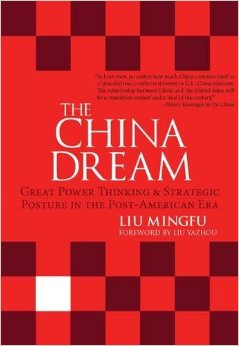 You might be forgiven for attributing this quote to China’s President Xi Jinping, who has made the China Dream the refrain of his tenure in office. But you would be mistaken. The quote comes from the book China Dream (Zhongguo meng) by Liu Mingfu, a retired PLA colonel. Liu’s book, originally published in 2010, was in high demand even before publication, “the subject of a bidding war from dozens of Chinese commercial publishers.” Subsequently, it has gone through many editions and in 2015 it was published in English.

What is so remarkable about Liu’s book? For starters, the book’s history is less straightforward than the short narrative above suggests. When Liu’s bookwas first published in 2010, it did indeed meet with great success, but then, according to the WSJ, it was removed from bookshops over fears it would hurt relations with the U.S. But in November 2012 fears were forgotten when, standing in the National Museum of China, President Xi Jinping delivered his “China Dream” speech. New editions of Liu’s book were quickly brought forward, favorably placed in the “recommended reading” section of a state-run bookstore. What had been a faux pas had become à la mode.

Now these really are the December 2012 words of Xi, and even if they were not directly inspired by Liu’s book, they certainly sound like a page out of China Dream, to Liu’s abundant delight.

This brings us to the third reason to reflect on Liu’s book. In America, Liu has been commonly depicted as something of a vulgar hawk. “Col. Liu, you see, makes it perfectly clear that the ‘dream’ of China is to ‘dominate the world.’ And in order to do so, he writes, China needs to revive its ‘warrior culture’ and remember its history of ‘offensive warfare,’” a recent reviewer in the Washington Times has written. But as LSE’s Christopher Hughes, an expert on Chinese nationalism, has rightly noted, for anyone who has bothered to actually read Liu’s book charitably, it is clear that Liu’s China dream is not one of world domination and that Liu is not a “adventurist hawk.” Put differently, there has been much smoke, but commentators have so far mostly refrained from actually examining the alleged “fire”: what Liu actually said in his book, a solid 272 pages in English. It is to this task the remainder of this essay turns.

One is tempted at first glance to dismiss Liu’s book as undisguised propaganda. It is filled with gems like: “Chinese civilization was not established through conquest.” “China always stayed in its own territory.” “A country without extension or invasion over thousands of years.” “China is a bit more civilized than America.” “China’s hands are clean, its history is free of guilt, and it holds moral high ground.” Unlike every other previous world leader, it has “excellent cultural genes” and “excellent traditions as a global leader.” I could list such quotes ad nauseam, but the point is made: Liu believes China to be culturally superior to all other nations because of its great righteousness, virtue, and peacefulness. This is Chinese exceptionalism on steroids, and it must be said plainly that this is balderdash. The Qin Emperor, who unified China in 221 BC, did so by the power of violent conquest. He then, according to ancient Chinese historians, enslaved hundreds of thousands of people to construct his burial grounds. Furthermore, throughout Chinese history “China” was not a static concept: the lands belonging to the emperor waxed and waned depending on his strength. China’s modern boundaries are owed to the seventeenth and eighteenth century conquests of the Qing, who “marched west,” as Yale professor Peter Perdue has shown. And as for China’s history being “free of guilt” and “civilized,” little need be said about Mao’s ruinous policies or the more recent crackdown at Tiananmen Square.

But to dismiss Liu’s China Dream as mere propaganda would be to miss a solid core of ideas worthy of serious thought. Liu’s self-described objective is “to waken the sleeping dragon, reestablish the will to make China the global leader, and again make sacrifices to make our will a reality.” In this sense, the time Liu spends on is—discussing China’s glorious and virtuous past—is actually a distraction from ought—making China into something Liu readily admits it currently is not. And here, it is worth noting, Liu’s China dream is not simply his own individual fantasy. Chinese reformers from Sun Yat-sen to Chiang Kai-shek to Deng Xiaoping have long sought fuqiang, wealth and power, for their nation. After all, following a century of humiliation, dreaming of strength, prestige, and leadership is not odd at all: if a nation of 1.3 billion people could not possess such characteristics after decades of struggle, Liu quotes Mao approvingly, they would deserve to have their “membership in the human race revoked.”

Finally we have reached the heart of Liu’s dream: that China in the twenty-first century would reshape the international system according to its values. For Liu, struggles between “champion nations” and “potential champion nations” are the very stuff of international politics. In the past, Liu readily acknowledges, such struggles have been destructive. Who can look upon the wars of European history with other than horror? With real creativity, however, Liu attempts to establish that the nature of the international system has changed throughout time. Wars used to be duels in which one party swallowed the other—e.g., the many partitions of Poland. The invention of nuclear weapons made this model impossible, and so competition between great powers became akin to a boxing match: the U.S. and the USSR spent the Cold War hammering one another, but not with the intent to kill. Finally, today, apparently because of economic interdependence, great power competition is akin to a marathon. The great powers chase one another to the finish line, the exertions of each spurring the other on. But one caveat: this race between the U.S. and China has no set finish line—instead, it is scheduled to end only with the fading of the twenty-first century.

In the marathon of the twenty-first century, Liu expects American hegemony to end at some point—likely in 2049—and for it to be replaced with “a new, multipolar world.” This will be a world not of “Yellow Peril, but of Yellow Favor,” in which China enriches the world in all sorts of wonderful—and totally ambiguous—ways. Yet, importantly, Liu does not envision an unhinged China of the post-Cold War American variety. Instead, China—even as a “champion nation”—would be “effectively checked and controlled by the world.” The unchecked power of any nation is to be feared, even that of the “noble” and “peaceful” Chinese. Edmund Burke would applaud.

How is the U.S. likely to respond to such a challenge to its hegemony? Liu’s answer is the same as John Mearsheimer’s: “Almost all great powers will be unaccommodating of the rise of other great powers.” America will be China’s rival, and “unblinkingly and without hesitation” it will respond the way it knows best: with containment aimed “to weaken China in national strength, dwarf China in national status, and delay China in its national renaissance.” In this “realist” environment, China’s response should be that of the Romans: Si vis pacem para bellum—If you want peace prepare for war. Like Holland of the seventeenth century (see Gerard de Lairesse’s paintingAllegory of the Prosperity of Amsterdam, included with this article, which shows Mercury crowning Lady Amsterdam as she receives the tribute of the world, and which Liu references favorably) China should become “an accountant’s office safeguarded by fleets.” The goal of such military might, however, is explicit: “to make the United States unable to afford to contain China.” This is a defensive vision meant to secure China’s rise and promote its status as a great power, not to conquer the world as the Washington Times review quoted earlier so crassly put it. And even in such an environment—it should be remembered—Liu still insists that this competition will be limited by the indivisible linkage of international economics with international politics so characteristic of the U.S.-China relationship.

Now that we’ve placed Liu’s work in context and reviewed his arguments, how should we assess them? Liu is on the right track in explaining the evolution of the international system: nuclear weapons, globalization, and interdependence have indeed shifted international politics. Mercantilism is no longer a major cause of war, and mutually assured destruction forces states to box rather than duel. He is also correct in his assessment that China has enormous strides still to make before it actually “rises” and that it can learn much from the U.S. in this process. Rejuvenating China is actually by and large a domestic project that should focus on developing human flourishing, and that is what Liu emphasizes in his final chapter. Liu rightly makes a case for a multipolar world in which great powers balance one another: this is how international politics works, and he wisely leaves utopian visions of unconstrained power behind. He is also right to boldly assert that the U.S. will respond to China’s rise with containment. Since Liu published his book six years ago, the trend has become even clearer. The U.S. will not tolerate a peer competitor. This conviction has driven American strategy since WWII, and today the Washington consensus is clear: the U.S. will seek to maintain its liberal hegemony come what may. Finally, Liu’s vision does indeed incorporate the ambitions of the nation’s previous great leaders. As Xi has put it, previously “countless Chinese patriots rose up one after another and fought for the renewal of the Chinese nation, but all ended in failure.”

Nonetheless, Liu’s faults are as glowing as his merits. To begin, his constant repetition of the “angelic China” narrative is shameless propaganda; if he actually believes this narrative, the verdict can be only more damning. Liu is also wrong to assume that the defensive nature of China’s rise means, “there is not a real threat for the US” and therefore no need for an arms race. American policymakers will not take Liu’s word as the definitive explanation of China’s military growth. This is the nature of the security dilemma. As such, arms races, internal and external balancing, and crises should be expected. Only by realizing that war is actually not “improbable” can we make it so. Along this same vein, Liu is wrong to assume economic interdependence will make U.S.-China rivalry a marathon rather than a boxing match. “Geo-economics” is becoming increasingly popular among American foreign policy circles, and once a few major crises occur, economic concerns will almost certainly take a backseat to realist posturing. Finally, in a major weakness for his book, Liu never specifies how, precisely, China will develop the sort of soft power that would make it popular among its neighbors and indeed the world.

To conclude, Liu Mingfu’s China Dream is an important book that provides insight into the hopes and ambitions of many Chinese, and this probably includes President Xi Jinping. Liu’s vision is for a creative race between China and the U.S. that establishes a new equilibrium of global power in China’s favor. Only then will China have finally stood up. Liu’s own vision is comprehensible, and, on first appearance, benign. The trouble is that in the end, we don’t really know if Liu’s China dream is (or indeed, even more importantly, will be) the China dream. Those who are curious will have to carefully watch the contenders in the twenty-first century’s grand marathon.

China’s Rise Chinese Dream
printTweet
You might also like
Back to Top
CHINA US Focus 2022 China-United States Exchange Foundation. All rights reserved.