The Remodeling of Chinese Policy-Making

In March 2018, the Chinese central government announced a comprehensive restructuring plan of the party and state organs. Accordingly, four former “Leading Small Groups” (LSG) located at central CCP headquarters were renamed commissions and two additional commissions were newly founded. With the National Security Commission and the Commission on Military and Civilian Integrated Development, both established in 2014, the central CCP headquarters has a total of eight specific commissions that provide coordination on several overlapping political areas and facilitate the design of major political programs (see table below). By August 25, all the renamed and newly formed commissions had their first meetings and officially started their operations. This systematic reorganization at the center of political power is designed to make both decision-making and policy implementation more effective.

Table: Commissions in Charge of Specific Policy Agendas at the CCP Headquarters

In Chinese politics, beyond the official party bodies defined in the party constitution, there were several informal boards called "Central Leading Small Groups." These groups were extremely important for the preparation and coordination of policy in overlapping areas like economics and finance, foreign policy, cyberspace security and ideology, before the Politburo and its Standing Committee made final resolutions on the matter.

After taking office in 2012, Xi Jinping gradually began to reorganize and remodel these LSGs to enable effective implementation of his political agenda. His efforts are particularly evident in the founding of the “Central Leading Small Group for Comprehensively Deeping Reforms” in 2014, which consisted of 43 representatives from the legislature, executive, judiciary, and army, as well as from party organs. Their meetings were routinely arranged before meetings of the Standing Committee of the Politburo (or meetings of the entire Politburo) so that their decisions could be promptly approved and confirmed by the top party officials. Before it was renamed the "Comprehensively Deepening Reforms Commission” in March 2018, this LSG adopted a total of 270 political programs – seven programs per meeting on average. Well-known examples are, for example, the establishment of the Experimental Zones for Free Trade in Shanghai, Tianjin, Guangdong, and Fujian; the introduction of the Social Credit System; as well as reforms related to SOEs, the finance sector, and judicature.

In addition to the traditional functions of identifying and analyzing policy-relevant issues, consultation and coordination across state, party and military bodies, and formulation of political programs, the new commissions are now also responsible for "top-level design" in implementation and evaluation. In other words, the new commissions cover the entire process of policymaking in major political areas.

Therefore, the announcement of the restructuring plan in March 2018 does not indicate a new drive for reform, but rather the completion of the institutional reorganization of the central party headquarters undertaken during Xi Jinping’s first term. During the second term, these eight political commissions are tasked with dealing with the top priorities of Xi's political agenda. This reorganization process will likely lead to the political commissions becoming key decision-making bodies that predetermine decisions that formally ought to be taken by the CCP Politburo and its Standing Committee.

The New Leadership Structure of the Political Commissions 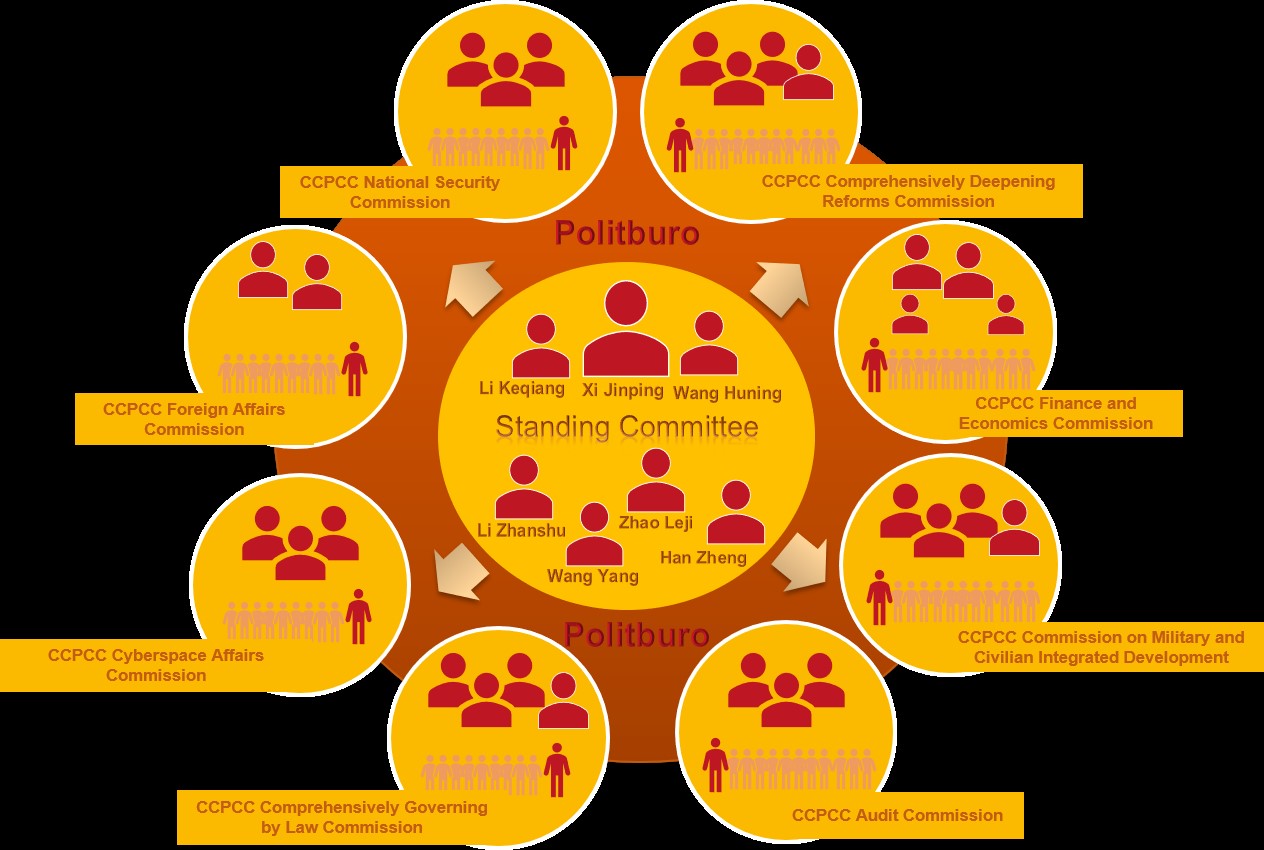 Another feature is the strong presence of Premier Li Keqiang, who acts as the Deputy Head of all commissions. This sends a clear signal that more forceful and effective implementation of the Party Center’s decisions is expected from the central government, with the premier in the front line. Strikingly, the position of deputy head of the LSG on foreign policy was traditionally held by the country’s vice president, but in the renamed commission, Premier  Li Keqiang holds this office rather than Vice President Wang Qishan. This change is closely related to the increasingly active global role of China, especially since the introduction of the “Belt and Road” project initiated by Xi Jinping in 2013. In addition to the Ministry of Foreign Affairs, many other ministries of the State Council, which earlier primarily dealt with domestic issues, also play an active role in this project. The coordination between foreign policy and domestic policy must be increased, consequently, and the premier is expected to manage the implementation of this mammoth project.

Beyond Li Keqiang, Wang Huning also has a strong presence, serving as deputy head in four commissions. In the Standing Committee of the Politburo, Wang Huning ranks fifth behind Xi Jinping, Li Keqiang, Li Zhanshu, and Wang Yang, but he takes far more responsibilities than his two colleagues Li Zhanshu and Wang Yang put together in the Party Center’s political commissions. Wang Huning’s key role in the policy-making process at the central party headquarters is thus evident.

Decreasing Role of the Politburo Standing Committee in Policymaking

Traditionally, each member of the Standing Committee has been responsible for one or more major overlapping functional areas. They made preliminary decisions with the representatives of the various governing and party authorities in each LSG before submitting them to the Standing Committee. This decision-making modus was unproblematic when the seven members of the Standing Committee quickly came to a consensus. However, when controversial decisions are to be taken, the principle of collective leadership and the need for consensus can result in blockades and delays in major decisions, as increasingly occurred under the former CCP General Secretary Hu Jintao (2002-2012). Experiencing these obstacles was crucial to empowering Xi Jinping to restructure the LSGs and strengthen the decision-making capacity of agenda-driven commissions at the Party Center.

To what extent this institutional restructuring increases the internal efficiency and accountability of political decision-making remains to be seen. However, policymaking on the top priority issues of Xi Jinping’s agenda will effectively be shifted from the Politburo’s Standing Committee to the special political commissions in the upcoming years, while the Standing Committee will tend to be downgraded to a formal confirmatory body in the decision-making process.

Xi JinpingChinese Communist Party
printTweet
You might also like
Back to Top
CHINA US Focus 2021 China-United States Exchange Foundation. All rights reserved.