A Tale Of Two Globalizations 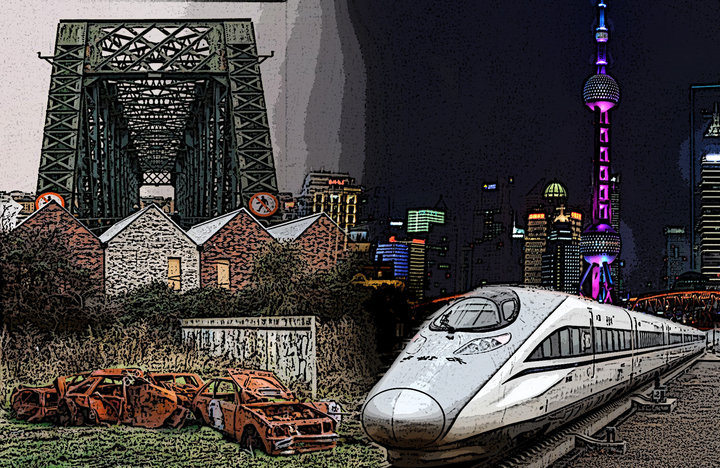 Living worlds apart on the same planet will only make Brexit and terrorism a premonition of worse times to come. (WORLDPOST ILLUSTRATION/GETTY)
In a recent interview with The WorldPost, Singapore’sKishore Mahbubani argued that the last 30 years of globalization have been some of the “best” ever in Asia because a new middle class of hundreds of millions has arisen out of the dead end of poverty. In this brief video, adapted from longtime China adviser Zheng Bijian’s WorldPost op-ed, we outline Beijing’s mission to spread that growing prosperity across Eurasia to Africa through a massive infrastructure investment plan that once again connects the centuries-old maritime and land trading routes of the Silk Road. Zheng, author of China’s “peaceful rise” doctrine, calls it “a new phase of globalization.” The move could be “the most significant coordinated development undertaking in history,” Sara Hsu writes, but only if China treads carefully and does not replicate the downsides of its own rapid development.
Those same 30 years have been among the worst for many abandoned and left behind pockets in the West ― like Tilbury, a semi-forgotten port town just 20 miles east of glittering London. Having reached their own dead end, Tilbury’s voters sought to “take back control” by embracing Brexit in a revolt last year against the swell of seemingly anonymous global forces that battered and beat down this once proud and robust community even as they lifted prospects in far-off Asia.

Writer Jack Shenker and photographer Rob Stothard report in The WorldPost this week on their months-long investigation into the causes and consequences of change that have devastated the lives of Tilbury’s residents. It is not a pretty picture, nor a simple one. The causes range from former British Prime Minister Margaret Thatcher’s privatization of public housing and anti-union hostility in the 1980s, to job losses as industry moved away to the tin ear of former British Prime Minister Tony Blair’s “New Labour” in the 1990s, which championed individual mobility and adjustment to rapid innovation over community solidarity. Further causes included the arrival of hard-pressed immigrants who couldn’t afford London to the present-day limited work contracts sometimes available from major global corporations like Amazon. Putting together this whole string of blows against a once-strong community that helped foment the anti-globalization sentiment brings to mind the sharp definition of the problem by the former head of the World Trade Organization, Pascal Lamy. “Let’s call globalization by its real name ― capitalism, the market above all else,” he told a Berggruen Institute conference recently.

Social marginalization destroyed a traditional community like Tilbury. In a different way, it also generates resentment and alienation in Britain among some children of Muslim immigrants who, facing backlash and xenophobia from their birthplace, often don’t feel like they fully belong. Terrorist groups such as the so-called Islamic State are capitalizing on this and directly and indirectly radicalizing and recruiting those who feel forgotten or unwelcome. As Britain’s snap election approached, we saw two brutal attacks, one at an Ariana Grande concert in Manchester and the other on London Bridge and the nearby Borough Market.

“Terrorist attacks intensify the hostility to immigrants, which already helped fuel the Brexit vote that will take the United Kingdom out of the European Union,” Craig Calhoun writes in the wake of the most recent U.K. attack. “In itself, opposition to immigration is not new or high by historical standards. But today it is a symbol of anxiety about the effects of globalization and the path taken by British society. The anxiety stems not just from prejudice against immigrants but economic upheaval, decline in too many communities and a sort of crisis in national identity” as well. “England,” he goes on to say, “is sharply divided between zones of prosperity and decline. London, the southeast, and a few other centers like Manchester and Bristol are economically vibrant. The rest of the country is not, and some of it lags very far behind.” The aim of terrorism, Calhoun concludes, is “to make ordinary life unlivable,” further destroying trust with each other and thus undermining any sense of community already weakened by globalization.

The only way out of this spiral is to find ways to reconcile the two globalizations so that the benefits are inclusive globally and within societies. Living worlds apart on the same planet will only make Tilbury and terrorism a premonition of worse times to come.

One path ahead starts where interests converge. Even as the United States formally withdrew from the Paris climate accord, California Gov. Jerry Brown (D) traveled to China this week to begin building a “network of the willing” focused on how clean energy and a green economy can create the jobs of the future as well as stem climate change. In a highly symbolic event choreographed to send a message to the world, Chinese President Xi Jinping broke diplomatic protocol and met with the California governor, as if he were a national leader, at the Great Hall of the People in Beijing to discuss how to collaborate going forward.

Another place to start is for the U.S. to join the China-ledAsian Infrastructure Investment Bank — as France and Germany, among others, already have — so that development projects meet Western standards on environment and corruption. The AIIB president, Jin Liqun, has said the bank must be “lean, clean and green.”

While terrorist acts claimed by ISIS have repeatedly occurred in Europe and the Middle East in recent years, they rarely target Iran. That changed this week with a brazen attack on the Iranian parliament and its revolutionary father Ayatollah Khomeini’s mausoleum in Tehran, which comes in the wake of U.S. President Donald Trump’s embrace of Saudi Arabia’s anti-Iran strategy in the Mideast and the rupture between Qatar and other Gulf nations. Seyed Hossein Mousavian, who once headed the Foreign Relations Committee of Iran’s National Security Council, fears the attack risks fueling an all-out war between Saudi Arabia and Iran.

Finally, in our continuing series on Western Muslim converts, Akbar Ahmed profiles Imam Abdul Wahid Pedersen, a self-described “hillbilly” in Denmark who was once a rock musician.

(This article first appeared on The World Post of Huffingtonpost.com)

GlobalizationBelt and RoadISIS
printTweet
You might also like
Back to Top
CHINA US Focus 2022 China-United States Exchange Foundation. All rights reserved.