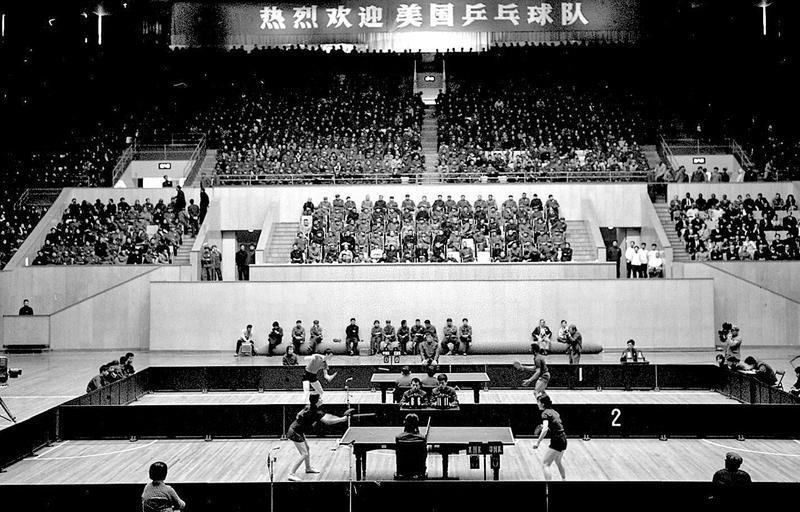 The national table tennis teams of China and the United States played historic exhibition games in three Chinese cities in the spring of 1971, heralding what became known around the world as “ping-pong diplomacy”.

The term “cultural diplomacy” is no neologism – indeed, cultural diplomacy has long served as a core pillar of “track-II diplomacy,” e.g. engagement and exchange efforts between private citizens and individual actors. Indeed, Ping Pong diplomacy qua sports/cultural diplomacy, played a pivotal role in reopening dialogue between China and America in the early 1970s.

For all the talk of “people-to-people exchanges” per China’s Belt and Road Initiative, and America’s emphasis upon “cultural and educational visits and tours” to China – one could be forgiven for thinking that the state of apolitical, non-partisan cultural ties straddling the two sides of the Pacific would be relatively robust.

Yet despite the historical depth and genuine goodwill that had been built up over the past decades – through the efforts of individuals seeking to foster better understanding and interlocution between the Chinese and American peoples, the past few years have seen a precipitous decline in exchanges of this nature. Routine, innocuous performances of certain plays, set pieces, or music with certain political connotations that may not conform with orthodoxy, have become invidious ticking timebombs for both performers and audiences alike. Similarly, previously active people-to-people channels and discussions around culture, as well as artist-in-residence exchange programmes, have slowed down considerably under suspicions of alleged espionage or infiltration.

Let’s face it. As things stand, cultural exchange between America and China is facing some rather treacherous and pronounced headwinds – solving the following is vital as a prerequisite to restoring some semblance of normalcy to bilateral cultural ties.

The first issue concerns the stringent travel restrictions imposed upon foreign travellers entering into China, which arose from the country’s zero COVID response to the pandemic. These measures have indubitably raised the costs for movement both within and into China – and have had an active deterrent effect on foreign visitors who had sought to undertake field trips and scout visits for performances in the country. Fortunately, with the gradual relaxation of such restrictions that have already, or that are due to unfold shortly, this obstacle should gradually ease within the next few months.

The second, concerns the perceived political and national security risks surrounding cultural exchanges and related institutions. That Confucius Institutes – broadly innocuous language-teaching institutions that nevertheless do adhere to certain stipulated boundaries and regulations concerning their contents and approaches to teaching – are now painted as vehicles for intelligence gathering, is indicative of two fundamental facts: first, that there exists a significant volume of mistrust and uneasiness towards the presence of Chinese organisations or institutions, so long as they could be viewed as remotely affiliated with the state (even though such ties may not, as it turns out, necessarily hold); second, that the Chinese government must take seriously the root causes for the extremely mixed and at times hostile reception towards its international cultural presence.

The dangers of over-securitisation also apply to the way Chinese authorities engage with “Western” non-government organisations dubbed to be promoting cultural values and norms that are antithetical to the dominant zeitgeist or mainstream thought in China. Recognise that the basis for cultural exchange is frank, open conversation and debate; such conversation and debate cannot occur unless the state – especially one with incredibly potent apparatus – grants that there could be the breathing room for such candid talk. The deterioration in Sino-American relations over the past few years has rendered many in arts and culture who straddled ‘both sides’ feeling deeply perturbed by the Manichean rhetoric and worldviews. The hope is that with the Bali meet, a degree of normalcy and trust could be revived in the relationship.

The third problem, then, is that both China and America are losing veteran leaders with the profundity of knowledge and savviness of practice to navigate both sides. On the Chinese side, there is a growing tendency to view cultural exchanges as opportunities to advance officially endorsed ideology and ‘correct values’; whilst there is nothing intrinsically wrong with arts and culture that are aligned with the state’s policies and worldview, it would be deeply regrettable if international cultural exchange in China were equated with a predominantly top-down and state-driven enterprise to boost the country’s image.

The best means for China to tell a “good story” about itself, is through empowering and embracing the cultural grassroots and ‘fringes.’

The same, of course, could be said of the pressures applied on cultural exchange on the American side, where cultural, academic, and art-based exchanges with China have either dwindled in volume and intensity, or come under disproportionate criticisms by politicians who endeavour to besmirch such exchanges as efforts to co-opt and destabilise. Such McCarthyist rhetoric would only drive away  the many artistic and cultural talents born in China.

So what gives? Two preliminary thoughts and suggestions. The first, is that cultural diplomacy should be championed and driven by cities, as opposed to countries. National governments are notoriously bureaucratic, bogged down by political considerations, and constrained in the range of options they can concurrently pursue. Cities, on the other hand, are far more flexible.

China would benefit from leveraging – as it has already touted – its most Westernised cities, e.g. Hong Kong, Shanghai, and, to a lesser extent, Shenzhen, as relatively liberal, progressive sites for cultural exchange. As long advocated by cultural pioneer Danny Yung (Zuni Icosahedron, Hong Kong), these cosmopolitan cities possess the wherewithal, relative freedoms, and the international goodwill, to serve as comparatively neutral sites for Chinese culture to meet the world.

Cities in the United States, on the other hand, can work with leading private citizens and practitioners that stand at the confluence of cultures, in carving out ‘safe spaces’ where unfettered, honest, and, uniquely, uncensored conversations over cultural policy and exchange can be carried out. The priority is to get both sides not only talking, but working together again.

The second, is to devolve the leadership and spearheading of cultural exchange policies to private citizens and individual artistic-cultural groups. Track-II diplomacy is best left to the second track – the societies and performers acting according to their own volitions, as opposed to particular state mandates or recommendations.

If governments truly care about preserving the ties between the peoples – individuals, performers, directors, writers, practitioners – from the two sides of the Pacific, then they must grant these agents the room and space to diverge from political and ideological orthodoxy. Creativity is best accomplished not through treating arts and culture as industries, as vehicles, or as a money-making business; instead, creativity thrives best where individuals are given the opportunities to plan, direct, and engage in expression of what they truly think. Culture, even when political, should not be politicised.

People-to-People ExchangeBelt and RoadU.S. China PolicyChina’s U.S. Policy
printTweet
You might also like
Back to Top
CHINA US Focus 2023 China-United States Exchange Foundation. All rights reserved.