Worldwide, the number of confirmed novel coronavirus (COVID-19) cases could exceed 100,000 in a week or so. In early February, I predicted a turnaround in the growth rate of new virus cases in China, but acceleration internationally. That's the new normal. The number of confirmed cases outside China is now about the same as it was in China a month ago (Figure 1). 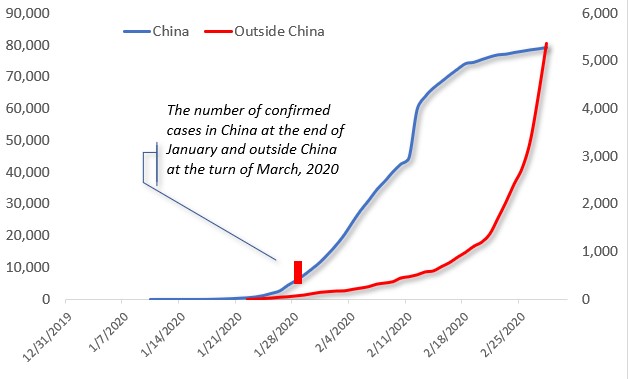 In light of almost two months of outbreaks, most observers have underestimated China's long-term resilience, while overestimating the ability of advanced economies to avert the outbreaks (compare Figure 2).

After mid-January, I projected three probable virus impact scenarios in China. Let’s take a closer look at those scenarios in light of the new evidence.

Recently, the IMF projected China's growth to fall to 5.6% in 2020, while global growth would fall 0.1 percentage points from the expected 3.3%. In China, the rebound story is still possible, as long as fiscal and monetary support is adequate, and if the small- and mid-size enterprises (SMEs) can jumpstart production soon. The SMEs account for over four-fifths of nationwide employment and more than half of the GDP.

In light of the international outbreaks, the IMF’s global estimate may be too optimistic. The big question is whether other major affected economies – the US, EU/UK, Japan and largest emerging countries - can achieve China-like fast containment.

According to new data, factory activity in China contracted at the fastest pace on record as the Purchasing Managers’ Index (PMI) fell to a record low of 35.7 from 50.0 in January. The same went for the services sector activity. Yet, both plunges were to be expected. Economic shocks translate to contractions. The question is the strength of the post-shock rebound.

In China, the expectation in January was that the first quarter would be penalized by a reduction of 1.2 percentage points to 5% or less, while the second quarter rebound would offset much (but not all) of the losses. March data could still prove high, given the low starting-point. It is these assumptions of the first scenario that fuel the bold projections by J.P. Morgan that the Chinese first quarter could go down to -4%, but second quarter would go up to +15%.

Recently, the IMF projected US growth to suffer a 0.4% slowdown in the annualized growth; that is, from 2.0% to 1.6%. But that is predicated on success in outbreak containment.

Today, the first and most benign “SARS-like impact” scenario is no longer likely. But nor is the second “extended impact” scenario inevitable if China gets back to business in March. Yet, uncertainty is beginning to grip the rest of the world, as evidenced by the recent multi-trillion-dollar market corrections in US and elsewhere.

What has made things worse is that, instead of timely mobilization against the virus, Washington has sought to politicize China’s outbreaks.

The Trump cabinet’s efforts to exploit the crisis in the trade war have been exemplified by Commerce Secretary Wilbur Ross. On January 30 after the ‘Phase 1’ trade deal, Ross declared the coronavirus in China would benefit the US economy. The politicized attacks are reflected by Secretary of State Mike Pompeo and Health and Human Services (HHS) Secretary Alex Azar who blame Beijing for the crisis.

In reality, the WHO has applauded the central government’s historical containment measures, which saved countless lives in the mainland and around the world. These Chinese measures are now deployed as a blueprint around the world to proactively mobilize against the virus.

In the past, the US has often boosted international collaboration against common threats. That hasn’t been fully the case now. On February 4, the WHO’s chief Dr. Tedros said that three of five WHO member countries outside China had failed to provide adequate information in a timely manner.

The US track record also suggests a set of mistakes by the Trump administration. In February, the first Americans were evacuated from Wuhan, the epicenter of the virus outbreak. Recently, a whistleblower at the HHS sought federal protection after complaining that more than a dozen workers who received the Americans from Wuhan lacked proper training and protective gear for coronavirus infection control.

Also, after mid-February, the State Department said it would fly home 14 Americans who had been quarantined two weeks for the coronavirus on the notorious Diamond Princess in which a botched quarantine has resulted in 705 infected and half a dozen deaths. Despite pleas by the Centers for Disease Control (CDC) to keep the infected US citizens in Japan, Pompeo’s State Department went ahead with its plans and put the infected on a plane with healthy people.

At the same time, the CDC found that some coronavirus test kits delivered to state laboratories were faulty. Now the hope is to start tests in US states in a week. Yet, local tests to expedite the diagnosis process will be 3-4 weeks late.

In South Korea, the number of confirmed cases exceed 3,200 with almost 20 deaths, due to a ‘super-spreader’. The US is not immune to such outbreaks, which also feature the lack of or inadequate monitoring of quarantines and self-quarantines. After mid-February, California health officials said that 7,600 people who had returned after visiting China during the virus outbreak had been asked to quarantine themselves at home. Yet, the CDC is not tracking how many people from each US state who have returned from China have been asked to isolate themselves. Instead local health departments have discretion in how to carry out the quarantines.

When the WHO declared the ongoing virus outbreak a “public health emergency of international concern” (PHEIC), it was particularly concerned for weaker healthcare systems in developing economies. Highly polarized advanced economies – including health-service systems in US inner-cities and rural margins, large prison populations and nursing homes - are not immune to such problems. Aging demographics could also compound local transmission challenges.

According to the WHO’s new report, the Chinese containment response was a “truly all-of-Government and all-of-society” effort, led by President Xi Jinping and his closest executives. Together with the WHO, they chose to fight the struggle against COVID-19 with historical measures, and unity at home and cooperation abroad.

In the US, as HHS chief Azar failed to retain his role in charge of Trump’s virus response, he was replaced by Vice President Mike Pence. Yet, Pence has a controversial track record of ignoring public-health evidence. As governor of Indiana, he slashed public health spending and delayed the introduction of needle exchanges in the early 2010s, which contributed to the state’s worst outbreak of HIV.

Fatal virus outbreaks are not won by politicking, crisis exploitation and poor coordination. As WHO chief Dr. Tedros put it recently, “together, we are powerful. And our greatest assets are facts, reason and solidarity.”

COVID-19Global GovernanceGlobalization
printTweet
You might also like
Back to Top
CHINA US Focus 2023 China-United States Exchange Foundation. All rights reserved.