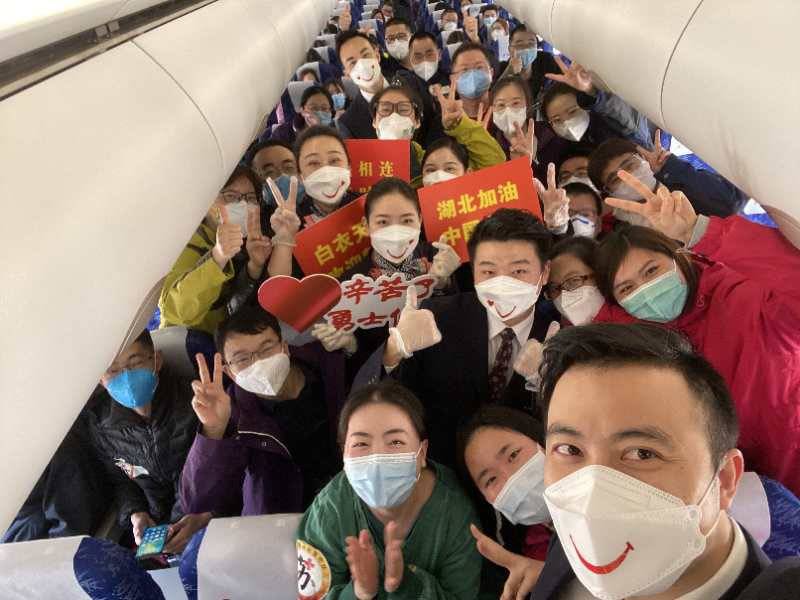 The medical teams from other parts of China departed from Wuhan in March after the COVID-19 was under full control.

The first imported case of COVID-19 was recorded in South Korea on January 20th and in the U.S. two days later on January 22nd. Nine days later, on January 31st, President Trump declared a domestic public health emergency and suspended the entry of travelers arriving from China. South Korea, by contrast, continued to receive as many as 20,000 visitors daily from China, limiting its ban to Hubei province (including its capital, Wuhan) on February 4th. Two and a half months later, on April 15th, the U.S. recorded 632,546 cases and 28,326 deaths. South Korea, by contrast, had recorded 10,591 cases and 225 deaths. On that date, the nation even conducted its National Assembly elections, recording a 28-year high voter turnout of 66.2 percent. South Korea is by no means an outlier; it has been bested in its COVID-19 response by its East Asian compatriots, Taiwan, Singapore, and Hong Kong. Each recorded its first imported case of COVID-19 between January 21st and January 23rd, yet each had managed to limit its death count to the single digits as of April 15th.

The vastly contrasting performances of U.S. and East Asia of prevention, containment, and mitigation provide an instructive context to interrogate the Trump administration’s accusation that the Chinese government deliberately suppressed information on the breakout of COVID-19, and that its secrecy is to blame for the mounting casualties in America and across the globe. The charge has been repeated on the editorial pages of the Wall Street Journal and the Washington Post, as recently as April 17th in the latter case. The crux of the accusation is that China knew – and the World Health Organization (WHO) was kept informed separately by the Taiwanese – that there was evidence of human-to-human transmission of COVID-19 as early as December 31st, 2019. Yet, rather than alert the U.S. and international public health community, China suppressed this vital piece of information until January 20th and even silenced the medical professionals who tried to raise the alarm. The Trump administration claims that had China acknowledged the truth of human-to-human transmission and moved aggressively on virus containment and mitigation three weeks earlier, the number of global coronavirus cases would have been reduced by as much as 95 percent.

This three-week timetable-based accusation is both factually incorrect and materially bogus, in part because of its reliance on a solitary – and as it turns out, dubious – source.

The origin of the December 31st revelation of COVID-19’s human-to-human transmission is a Financial Times story that quoted Taiwanese Vice President Chen Chien-jen, an epidemiologist by training, as saying that Taiwan had alerted the WHO of the virus. No such alert was in fact provided. What Taiwan’s Ministry of Health and Welfare did email the WHO on December 31st was that “at least seven atypical pneumonia cases [had been] reported in Wuhan, China … [and while] the samples [were] still under examination, [the] cases ha[d] been isolated for treatment.” There was no mention whatsoever in the message of “human-to-human transmission”. Pressed on this point in mid-April, Taiwan’s Health and Welfare Minister could only justify that patients being “isolated for treatment” should have been construed as evidence of potential human-to-human transmission. Given that there were no confirmed cases on the island at the time (December 31st), Taiwan could not state that human-to-human transmission was a definitive fact.

The Taiwanese dissembling aside, the revelation to the WHO contained no more useful information other than what the Wuhan City Health Committee had itself put out that very same day. On December 30th, the Committee issued an urgent public notice about a viral “pneumonia of unknown etiology”, and in its epidemic briefing the subsequent day, it listed as many as 27 atypical cases of pneumonia. As with any respiratory pathogen, it was always understood that the risk of person-to-person spread could not be discounted.

More to the point, Chinese central and provincial authorities were laser-focused at the time on getting to the bottom of the outbreak and investigating and isolating the virus. The race to identify the pathogen kicked off on January 2nd. By January 5th, China was able to report to the WHO that the outbreak differed in structure from other respiratory pathogens such as influenza, avian flu, MERS, etc., enabling the latter to report globally for the first time that cases of an unknown pneumonia had broken out in Wuhan. On January 7th, the first new virus strain was isolated; by January 9th, the pathogen was judged to be a new coronavirus; on January 12th, its full genetic sequence information was deposited with the WHO; and on January 15th, a detailed protocol of initial public health countermeasures was instituted by China’s National Health Commission. Interrogating human-to-human transmission rates was (understandably) a less immediate priority at that time.

Throughout this period, there was no deficiency either on the transparency front. Following the Wuhan City Health Committee’s viral “pneumonia of unknown etiology” notice of December 30th, the WHO as well as Hong Kong, Macao, and Taiwan were informed of the brewing epidemic on January 3rd. The U.S. Centers for Disease Control (CDC) was kept in the loop the next day (judging by the CDC issuing of its highest-level travel notice on January 6th), and preliminary progress on pathogen identification was relayed to the WHO on January 9th. For added measure, the President Xi Jinping presided over an epidemic control-related Politburo Standing Committee meeting on January 7th, and further outreach to American disease control counterparts was initiated on January 8th and again in mid-January.

Clearly, the Beltway accusation that Beijing was materially negligent by suppressing vital COVID-19-related information during the better part of this critical three-week period in January – and, as a direct consequence of which, there is now an explosion of global cases – is grossly inaccurate. The low fatality count in China’s East Asian neighborhood belies it. The accusation also retrospectively presumes that perfect information could be available at that early hour on COVID-19’s aggressive infection rate, long incubation period, and peak contagiousness at the pre-symptomatic stage. Even if Beijing and the WHO had been able to confirm the fact of human-to-human transmission during the first half of January, without an early and concerted prevention, containment, and contact tracing strategy in place, the global COVID-19 case-load would have been just as large today. For the better part of that 3-week ‘fog of war’, Beijing did, in fact, marshal a prompt, robust, and adequately transparent response.

It is only for the period between January 15th and January 20th (when President Xi publicly addressed the crisis for the first time) that the Chinese side could be faulted for domestically downplaying the gravity of the outbreak. An elevated public alert could have indeed been put out much earlier, without necessarily engendering panic. Stronger controls on population movement should have been instituted, even at the expense of interrupting lunar holiday travel plans. And Wuhan city authorities should never have allowed the unconscionable public potluck supper of January 18th to take place. But even here, it requires a herculean leap of logic to believe that droves of infected Wuhan residents obtained entry visas in a flash and boarded airplanes to foreign and U.S. destinations (which had started screening Wuhan-originating arrivals on January 17th). For what it is worth, President Xi Jinping, too, was outside the country (on a state visit to Myanmar) on January 17th and 18th, stultifying the response perhaps during this period. The weight of evidence in any case points towards the novel coronavirus already coursing its way across China’s borders by that time, having probably found its human transmission medium in early January. Furthermore, China’s draconian post-January 23rd lockdown measures did much to stanch the wider global spread of the virus thereafter and compensate for some of its earlier failings.

China has a heavy COVID-19 cross to bear going forward. For the second time in the short space of 20 years, a global public health emergency that has ravaged lives and livelihoods has originated on its soil. The illicit trade in wildlife and underregulated wet markets must be quashed, and the wild animal-eating habits of certain Chinese diners must be socially changed. Devastated Belt and Road Initiative countries, such as Iran and Italy, must be financially supported if the Initiative is to deflect the reputation as a gateway through which viruses travel. And as a large sovereign creditor in Africa, China bears an obligation to provide significant debt restructuring as well as outright relief. Getting distracted by – let alone embroiled in – specious accusations and theories of cover-ups, non-transparency, and political dealing should not be a priority at this moment.