In April, my first COVID-19 report focused on the progression of the pandemic from China to Western Europe and the United States, and the belated mobilization and containment failure across countries in the West, from Washington to Brussels.

My new report, The Tragedy of More Missed Opportunities, released by Shanghai Institutes for International Studies, focuses on the new missed COVID-19 opportunities and the consequent human costs and economic damage in the largest world economies, particularly in emerging and developing countries.

At the current rate, confirmed cases could exceed 25 million by the end of August. In the absence of deceleration, they could soar to 50-60 million and deaths to 1.5 to 1.7 million by the end of this year. And, as projected by the April report, the devastation would prove particularly significant in the United States.

The new report shows how even more opportunities have been missed in the past quarter, as a result of the old public-health debacles and premature exits out of lockdowns, continued policy mistakes and the consequent collateral damage in low-, middle- and high-income world economies.

In mid-February, the WHO-China Joint Report concluded that “China’s uncompromising and rigorous use of non-pharmaceutical measures to contain transmission of the COVID-19 virus in multiple settings provides vital lessons for the global response.” Following these standards-setting measures to contain the outbreak, the Chinese economy is rebounding. In contrast, economies which began COVID-19 mobilization belatedly are coping with disastrous 2nd quarter results, as projected by the first report.

In the Americas, the US’s failure of containment, poor crisis management and premature exits, coupled with poorer economies and weaker health systems in Latin America, have resulted in the worst regional crisis worldwide. Yet, Canada’s track record suggests proper precautions can work, despite elevated risks in the region.

US states most virus-affected relative to world economies

In January, President Trump congratulated President Xi Jinping for China’s success in the containment of COVID-19. But as the Trump administration’s delayed responses and poor crisis management failed to contain the pandemic in the US, Trump reversed his stance. To win re-election, the White House has blamed China for the pandemic and dramatically escalated a trade war which is now being extended to technology, finance, and diplomacy.

Yet, contrary to the White House’s narrative, the global pandemic actually evolved in two phases. The first involved mainly Chinese cases from Wuhan, Hubei, and it was contained rather quickly. The second phase involved Western Europe and the US in particular, and it continues to fuel the global pandemic.

To understand the full magnitude of the adverse spillovers, let’s think of US states as independent economies. If these states were sovereign entities, then by August almost a fourth of the 25 most virus-affected economies were in the US, with California, Florida, Texas and New York in the top-10, right after the large economies of Brazil, India and Russia and even South Africa.

Nevertheless, aggregate data reflect poorly the actual realities unless adjusted to the size of population. To gain a more valid picture of the intensity of the pandemic, let’s focus on the population-adjusted data (total cases per million). In this view, US states accounted for a whopping 23 of the 25 most-virus affected large economies around the world.  In this ranking, Louisiana, New York, Florida, New Jersey and Mississippi come before Chile. Even the populous and highly virus-affected Brazil fell behind many US states, including tiny Iowa (3.2 million) and Connecticut (3.6 million) (Figure). 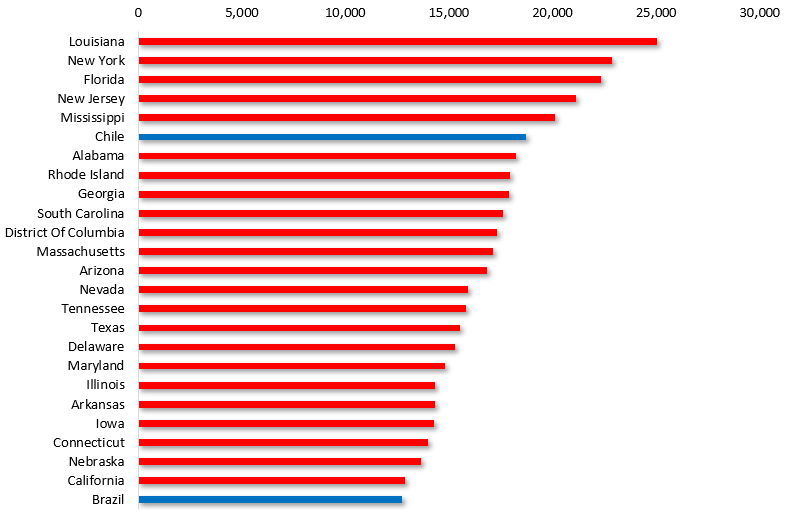 In my new report, the progressive course of the COVID-19 was examined in all major economies in terms of the timing of the official first cases, accelerated spread, effective reproductive number (Rt), transmission classification, flattening of the curve, new accelerations, and potential susceptibility to new waves.

While the virus was first officially recorded in China, the global pandemic has been fueled by delayed responses, failed containment and premature exits in Europe and the US. While the outbreaks began in Wuhan, Hubei, the sources of the pandemic are more complicated.

In the high-income group, the major Western European economies (Germany, France, UK and Italy), US and Canada, Japan and South Korea) the reported first cases in late January were associated with China. Yet, the confirmed spread has been linked with travelers from Western Europe and local transmissions, and to a lesser degree with travelers from US, Asia, the Middle East and China.

In the upper middle-income economies (Argentina and Brazil, China and Indonesia, Mexico, Russia, Thailand and Turkey) and lower middle-income economies (Bangladesh, Egypt, India, Kenya and Nigeria, Pakistan, Philippines and Vietnam) half of the first cases have been linked with China, another half with Western Europe, and to a lesser degree with Japan, the Middle East and the US. However, the confirmed spread has been associated with Western Europe and local transmissions, and to a lesser degree with the US, Midddle East and Japan.

In the low-income economies (Afghanistan, Congo DR and Ethiopia, Madagascar, Mozambique, Sudan, Uganda and Yemen) most of the first cases have been linked with Western Europe, and to a lesser degree with the Middle East, Japan and local transmissions, whereas the confirmed spread has been associated with local transmissions.

As measured by declines in expected gains of per capita incomes – a rough shorthand for living standards ­– the impact has been devastating in most economies and relatively worst in those that have been coping with pre-pandemic challenges.

Among high-income economies, most countries may face 5-7 years of lost progress, whereas in outliers prior challenges are contributing to far greater declines (e.g., Italy, Japan).

Among upper middle-income economies, China and possibly Indonesia may navigate through the crisis without negative contraction. In the case of China, the rebound is due to the relatively successful containment of COVID-19. In the case of Indonesia, secular growth potential drives recovery, but low testing still blurs the big picture. But most countries have already lost 5-7 years of progress and in some economies in Latin America, such as Brazil and Argentina, the lost years may prove twice as many as among their peers.

Moreover, the economic devastation in poorer economies could be significantly higher than currently acknowledged. Due to minimal testing and underestimated COVID-19 case counts, the everyday reality in countries like the DR Congo and Yemen differ dramatically from the official low number of cases. Instead of the pandemic, premature deaths could be attributed to “pre-existing health conditions.”

Worse, the COVID-19 progression may have been amplified by an adverse mutation, as cutting-edge research indicates. In Wuhan, China and Asia, the virus was initially dominated by the original ‘D’ variation. In March, a new ‘G’ variation evolved in Western Europe and the US, predominating subsequent infections. The implications are unsettling. Poorer economies could soon face more virulent virus strains that the lockdowns and travel restrictions in the West have so far kept in check.

What further aggravates the human costs and economic damage is the failure of multilateralism among major advanced economies. Stunningly, the WHO’s updated fundraising target represents barely 0.01% of the world’s (current) cumulative output loss.

Fiscal packages alone, which major economies use to cushion the collateral damage, amounted to $11 trillion in the first half of 2020. The final costs of these packages will be far higher and could result in a set of debt crises in major economies.

Tragically, what is most needed to overcome COVID-19 and the associated economic contraction is multilateral cooperation among all major economies and across political differences. Yet, a misguided blame game seems to be more attuned with the impending US election.

With the Spanish flu, it was not the first wave that proved fatal, but the second. If such painful lessons have not been learned by now, they will be learned over a major crisis that could result in a protracted pandemic and global depression.