Weathering the Storm: Wastewater Resiliency in the US and China

In 2018, floods resulted in over 20 casualties and billions of yuan in damage in China, with the government issuing 835 flood warnings nationwide. As global temperatures rise, the combination of extreme weather events and sea level rise threaten the basic infrastructure and water security of low-elevation Chinese cities. Coastal residents account for 43% of China’s population - approximately 170 million citizens live less than ten meters above sea level. In fact, seven of China’s ten largest cities are on the coast, creating high stakes for the government to address impending threats of flooding and sea level rise. Shanghai, China’s largest city, is on the frontlines of climate change as one of the world’s most flood-vulnerablemajor cities. Shanghai’s government was eager to invest in the sponge city initiative and expand greenspace, rooftop gardens and porous pavements to control stormwater floods. However, officials have been hesitant to invest in climate adaptation measures that don’t create a big splash, like the unglamorous networks of sewage and wastewater infrastructure.

Chinese cities could learn from New York City’s citywide wastewater resiliency plan to prevent flooding in treatment plants, as well as the city’s steps to address the most-common source of wastewater pollution, combined sewer overflows. Both the treatment plant resiliency and CSO reduction initiatives work separately to accomplish the goal of holistically increasing the resiliency of a city’s wastewater system.

Like in China, many cities in the United States have combined sewers that collect and transport stormwater and sewage simultaneously. Relics from a city’s original infrastructure, combined sewers cause an abundance of problems in cities today. When sewers overflow during storms (acombined sewer overflow, or CSO), they flood rivers and streams with a toxic combination of raw sewage and rainwater.

As one of the oldest cities in the United States, New York City experiences an average of one CSO every week. These overflows often discharge directly into the New York Harbor, preventing the city from achieving its mandate under  the 1972 Clean Water Act (CWA) to keep waters “fishable and swimmable.” In an effort to comply with the CWA, NYC has designed and constructed underground CSO retention facilities. These $300 million facilities collect and hold stormwater during heavy rain events, preventing deleterious strain on the sewer system. After a storm, the sewage and stormwater are released back into the sewer system, where they are transported to a wastewater plant for treatment.

The city is also implementing more affordable green infrastructure initiatives, such as developing natural catchment areas like rain gardens, park spaces, street trees, and permeable pavements. All of these solutions seek to reduce the amount of stormwater that enters drains in the first place. Because over 70% of New York City’s land area is covered by impervious pavement and buildings, the city’s Department of Environmental Protection (DEP) established theBluebelt program to prevent any remaining natural drainage corridors from being paved. Since the 1990s, the program has stewarded natural stormwater conveyors, like streams and wetlands, decreasing the need for construction of costly sewers. 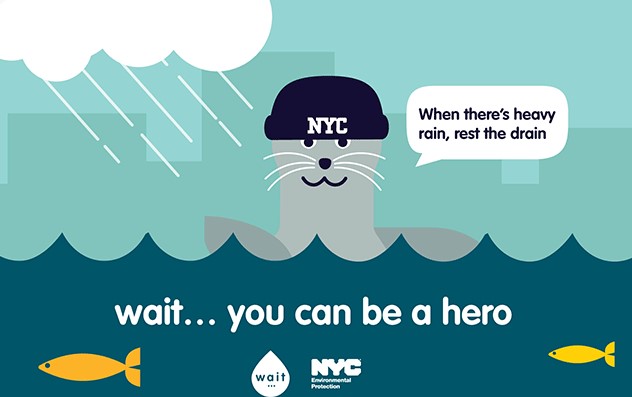 The “Wait” program offers a way for NYC's public to participate in CSO reduction.

CSOs are a severe threat to water quality. Investing in infrastructure solutions that replace CSOs should be a priority for Chinese cities. While China has made efforts to reduce urban flood risks, such as thesponge cities initiative, urban and central policymakers are ignoring China’s sewers. Combined sewers serve as the main drainage system in many of China’s most populous cities, including Shanghai and Guangzhou, whichdischarges 470,000 tons of sewage into the Liuxi River daily.

As one of thelargest contributors to urban pollution, the Chinese government should make addressing CSOs a top priority. This should be done via a combination of retention facilities, and public-engagement efforts à la NYC’s “Wait…” alert program, which can help reduce CSOs and positively change consumer behavior. Finally, China should also continue to grow its sponge city program, which will both naturally reduce CSOs and increase cities’ resilience.

NYC is heralded as a strong model for cities looking to increase their resilience to unpredictable weather events. After sustaining severe damage from Hurricane Sandy in 2012, New York City has established a $20 billion resiliency fund. This has financed citywide improvements, a wastewater resiliency plan, and a city Panel on Climate Change. In 2013, the city passed a benchmarking law (Local Law 84) requiring large buildings to collect energy and water data to be used for acity resiliency plan. Initially released in April 2015,OneNYC is now a robust project, with annual progress reports released each Earth Day. 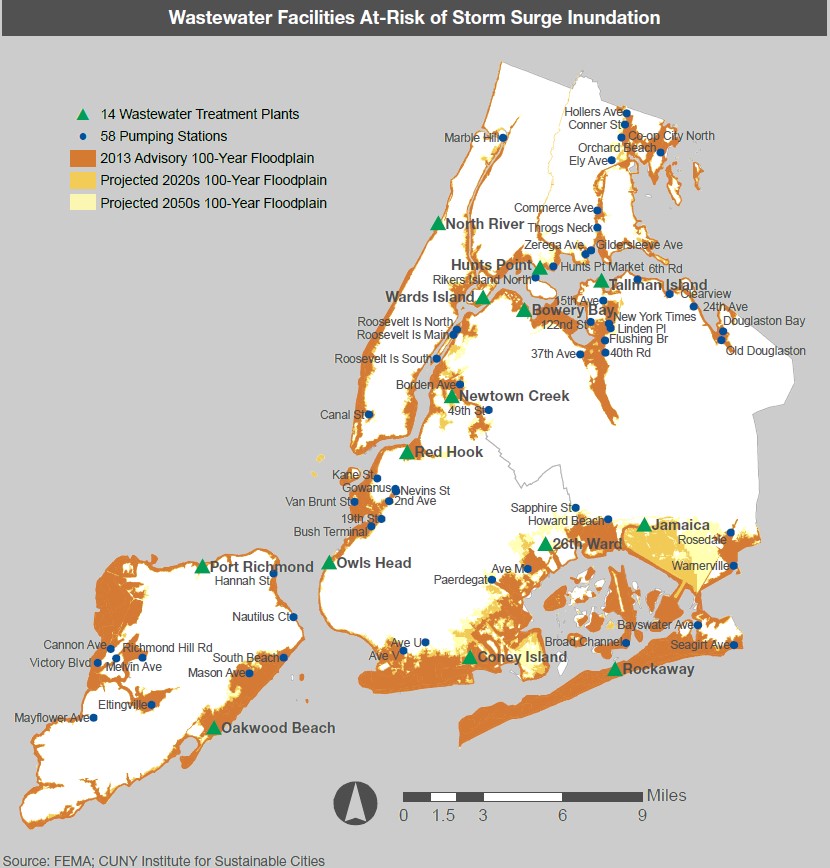 According to NYC Wastewater Resiliency Plan, all 14 of the city’s wastewater treatment plants, and sixty per cent of its pumping stations are at risk of flood damage.

New York City’s DEP also developed a resiliency initiative in response to power outages that led to serioustreatment disruptions in eight of the city’s wastewater plants during Hurricane Sandy. Untreated sewage flooded into rivers. After Sandy, a DEP study discovered the majority of the city’s pumping stations and all of its wastewater treatment plants are at risk of flood damage. In 2013, the DEP published awastewater resiliency plan with new design standards for 30 inches of flooding above the Federal Emergency Management Agency 100-year flood elevation estimates. The plan also outlines an adaptation strategy that includes sealing buildings, elevating and floodproofing equipment, temporary sandbagging, and installing the static barrier and backup power generators. Albeit hefty, the $41.5 million price tag of these “hardening” efforts is far lower than the estimated$2 billion in damages to NYC’s wastewater equipment over the next 50 years if no action is taken.

The Shanghai government has sought short-term - and controversial - remedies to its flooding woes, including redirecting flood water to neighboring Anhui province. Residents of rural Anhui, a designated “flood outflow district” of Shanghai, have been evacuated from their homes after officials opened dam gates of swollen rivers. This strategy of sacrificing Anhui to prevent Shanghai from going underwater is costly: in 2003, 17,000 Anhui residents were evacuated.

Aside from controversial flood management, China has embarked on other resilience efforts. In addition to the sponge cities initiative, four Chinese cities, Deyang (Sichuan), Huangshi (Hubei), Haiyan (Zhejiang), and Yiwu (Zhejiang) are members of 100 Resilient Cities, which supports the development of city-level resiliency programs and establishes a Chief Resilience Officer position in city government.

To ensure the resilience of its local wastewater infrastructure, China’s cities should follow the example of NYC by planning for wastewater treatment plants to operate during floods or storms. Such a plan should include a hardening campaign, including installation of backup power sources, elevation of critical equipment, and raising or sealing off areas of treatment plants. By capitalizing on the best practices of New York City’s wastewater management system, Chinese coastal urban centers will be able to weather the effects of climate change that will inevitably befall them.

Sustainable Development
printTweet
You might also like
Back to Top
CHINA US Focus 2023 China-United States Exchange Foundation. All rights reserved.