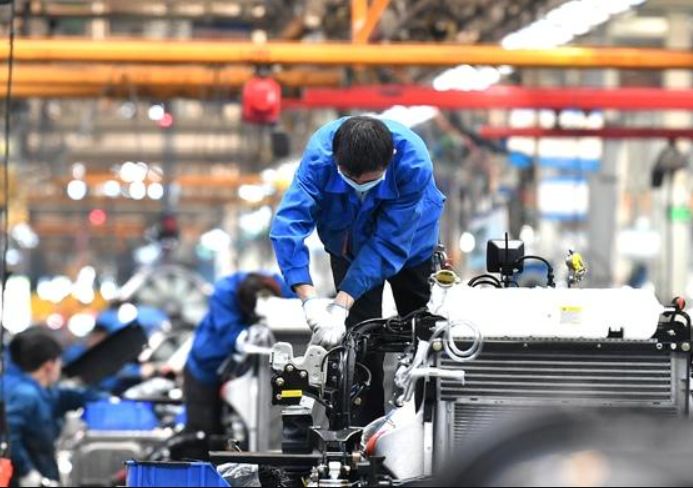 It is unsurprising that Chinese GDP rose by an astonishing 18.3 percent year-on-year during Q1. It was on a very low base of Q1 2020, when its GDP fell by 6.8 percent because of the coronavirus outbreak, the steepest drop of the past 59 years. Compared with the pre-pandemic period of Q1 2019, it was up 10.3 percent, or a 5.0 percent average annual rate, still roughly 1 percentage point lower than the years before COVID-19.

The high-tech industry served as the prime engine for the economy. New-energy vehicles, industrial robots, microcomputers and integrated circuits shot up more than 60 percent year-on-year and managed 19 percent annual growth over the past two years. The import and export of goods served as another engine. Total import and export volume exceeded $1.3 trillion, 38.6 percent higher than a year ago, and was 20.9 percent higher than Q1 2019.

The average annual growth rate for the past two years was as high as 10.0 percent, nearly three times the rate of the whole year of 2019 (3.4 percent). It means that trade has already enjoyed above-trend growth. Exports performed better than imports. During Q1 this year, exports grew by 49.0 percent and imports by 28.0 percent, making net exports a good driver for GDP growth.

There will be changes in the main drivers for the rest of the year. The tertiary sector will gain momentum while net exports will level off. Recent indicators have shown a late rebound in the tertiary sector. The overall business index for the service sector stood at 55.2 percent in March, 4.4 percentage points higher than in February.

Accommodations, catering and leasing have seen a return to the boom zone. Rail and air transportation, and financial and internet services too, have business activity indices above 60 percent. With the fast expansion of industry production, industry-related services will grow faster. It looks likely that the tertiary sector will have a higher growth rate during Q2, to be further accelerated during the second half of this year. As the tertiary sector accounts for over half of total GDP, its acceleration will become a new, decisive driver for the whole economy.

Net exports, however, will lose steam somewhat as a result of a faster recovery in many parts of the world, reducing demand for Chinese goods.

Industrial production will continue its current strength, supported further by a rise in manufacturing investment. On balance, China’s GDP growth for 2021 will be around 9 percent, slightly higher than the latest IMF estimate of 8.4 percent, leaving the average annual growth rate during the 2019-21 period at 5.5 percent, still lower than the pre-pandemic years.

Unlike last year, this year will see significant change in the world’s economic growth scenario. China will no longer be the only leading economy that had growth. The recovery will be broadly based. The latest IMF World Economic Outlook released on April 6 estimated that global GDP to grow by 6.0 percent, after a 3.3 percent dip in 2020. Developed economies will grow by 5.1 percent, with the U.S. leading the way at 6.4 percent. Emerging markets and developing economies will grow at 6.7 percent, with developing Asia set to grow by 8.6 percent.

Paradoxically, China-U.S. trade, which is generally perceived as depressed as a result of the trade war, became a bright spot during Q1 this year when it shot up by 73.1 percent year-on-year. Chinese exports to the U.S. were up by 74.7 percent and imports from the U.S. by 69.2 percent — 19.3 and 11.7 percent higher respectively over Q1 2018, the pre-trade war high. In other words, the much-troubled China-U.S. trade relations in fact contributed positively to China’s GDP growth for Q1 this year. If this trend continues, barring any significant, unexpected setbacks, two-way trade volume in 2021 will hit a historical high, outstripping the previous record of $633.52 billion (China Customs data) set in 2018.

Don’t forget that extra tariffs imposed by the U.S. on Chinese goods, and the Chinese counter-tariffs on U.S. goods are still there. The latest developments show that Chinese products suit the market needs in the U.S., with its economy in firm recovery. And U.S. products have good, growing prospects in the Chinese market as the economy there is also gaining strength. During Q1, Chinese imports of agricultural products worldwide increased by 33.8 percent year-on-year. Automobiles were up 30.2 percent, machine tools by 29.2 percent, aircraft by 100 percent, machinery and electronics by 30.9 percent and high-tech products by 31.0 percent — and the U.S. exporters have had a good share of it.

The strengthening of the Chinese economy also means growing attractiveness for global investors. In 2020, China was the only destination where world cross-border direct investment flows registered growth. During the first quarter of 2021, FDI inflows to China accelerated tremendously, hitting $ 44.86 billion (non-financial sector), a 43.8 percent rise over the depressed Q1 2020, but even 24.8 percent higher than Q1 2019 in the pre-pandemic period. Again, there are good opportunities for U.S. investors, and no chance to lose.

GDPChina’s EconomyGlobal EconomyU.S. Economy
printTweet
You might also like
Back to Top
CHINA US Focus 2022 China-United States Exchange Foundation. All rights reserved.