Bypassing the Bosnian coastal town of Neum with a bridge connecting Croatia’s northern Dalmatian coast with the southern region of Dubrovnik–Neretva County was a dream for past Croatian governments. The Croatian-Bosnian borders of the Adriatic city of Neum, according to Foreign Policy’s Michael Dobbs, is “the world’s most ridiculous border,” hence the necessity for Croatian infrastructure to bypass it.

The Croatian government first launched feasibility studies in 2013, and eight years later, Chinese contractors placed the last segment of the Pelješac bridge in place. After several centuries, the Dalmatian coast is now fully connected within the territory of the Republic of Croatia. The Belt and Road Initiative (BRI), and Croatian, Chinese, and European Union cooperation made this accomplishment possible. The bridge, along with its connecting roads, will be fully functional by June 2022. Construction began in July 2018 after the China Road and Bridge Corporation (CRBC) won an international bid to construct the 2.4km (1.5 miles) long bridge. After the Great Recession, the EU shelved the project until its ambitions re-emerged around 2017 when the European Commission allocated the necessary funding. 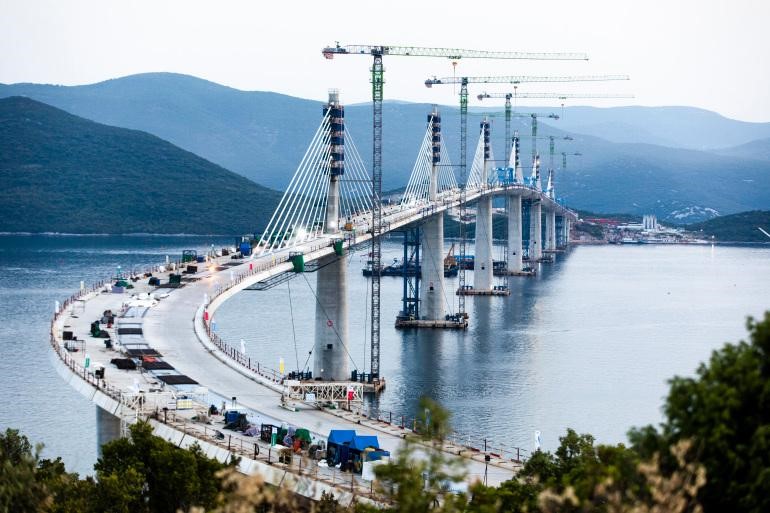 Andrej Plenković's Croatian Democratic Union (HDZ) led a government-signed contract with Chinese companies in 2018 to build a bridge that would bypass Bosnia and Herzegovina's coast in the small coastal town of Neum. The bridge would avoid Bosnia's territory and link the Croatian coast. Despite Bosnia's opposition, Plenković presented the project as essential to Croatia's future and ambition to connect the European Union with Dubrovnik and the surrounding area. In reality, the bridge is strategically crucial to Croatia since it allows for the free flow of people and goods up and down the coast, obstructed by Bosnia's 12-kilometer coastline.

Angered Bosnian officials argued that the bridge violates the state's access to open waters. The height of the bridge was contentious since 55 meters could obstruct the entry of large ships into Bosnian territory. Despite objections from Croatia's neighbor, the project pushed on.

More importantly, the project symbolized the first tripartite effort by China, Croatia, and the European Union to take on and finish a project together that carried significant strategic importance for an EU member state. This type of cooperation between the EU and Chinese firms could serve as a template for future projects throughout the Balkans and Central Europe, especially since the EU managed to broker a deal that worked for Croatia and the Chinese companies involved. Though Chinese firms only built and did not finance the bridge's construction, similar projects could serve as testing sites for Chinese influence and activity throughout Europe. Serious cooperation between Chinese firms and NATO allies might eventually irritate U.S. foreign policy circles or prompt American firms to improve infrastructure throughout Europe.

Prime Minister Plenković praised the project and stated that he did not see "why this project wouldn't be an excellent reference for CRBC for future tenders across the member states of the European Union." He emphasized that the bridge's construction brought together three critical partners who proved to work together on strategic projects important to the EU.

Tourists and locals eagerly awaited the bridge's completion. which will allow individuals to travel up and down the coast without needing to cross international borders. It also links important port cities in Dubrovnik-Neretva county with the rest of Croatia. Until the bridge becomes open for travel, tourists must wait at two border checkpoints between Bosnia and Croatia at Neum before entering or exiting Dubrovnik-Neretva country, which houses the famous UNESCO-protected Old Town of Dubrovnik. It is not uncommon for traffic jams to occur that leave tourists stranded for hours before entering Bosnia on their way to Dubrovnik.

The EU financed 357 million euros of the 550 million total cost. The Croatian government signed another two deals with Strabag of Austria to build the northern access road and Avax of Greece to construct the southern access road to the bridge, which will be functional next year.

In many ways, the construction of Pelješac synthesizes Croatian, EU, and Chinese interests. Prior Chinese business agreements addressed agriculture, commerce, digital economies, education, harbors, railways, sports, technology, and tourism, all within the context of the BRI. The CRBC previously signed memoranda of understandings to realign railways between the cities of Rijeka and Zagreb. At the same time, the China Railway Eryuan Engineering Group Co. worked to develop intermodal transport corridors, freight terminals, and logistics centers to modernize the lines of the Adriatic port cities of Split, Šibenik, and Zadar. Croatia formally endorsed and signed an MoU on bilateral cooperation in the framework of the BRI back in 2007.

But the competition of the Pelješac bridge marks the first time a Chinese company won a bid and carried out a project funded by the European Union. Completing the bridge is an impressive accomplishment for the Croatian government. A midnight opening ceremony featuring folk songs and fireworks was held after the final segment of the bridge was installed. Croatian Prime Minister Andrej Plenković said the bridge represents "a fascinating strategic accomplishment of the Croatian people and their state" that fulfills their longtime dream of connecting the Adriatic coastline. Completion of the bridge occurred three months ahead of the planned deadline despite the coronavirus pandemic and delays in transport from China to Croatia.

Belt and RoadChina-Europe RelationsBRI
printTweet
You might also like
Back to Top
CHINA US Focus 2022 China-United States Exchange Foundation. All rights reserved.