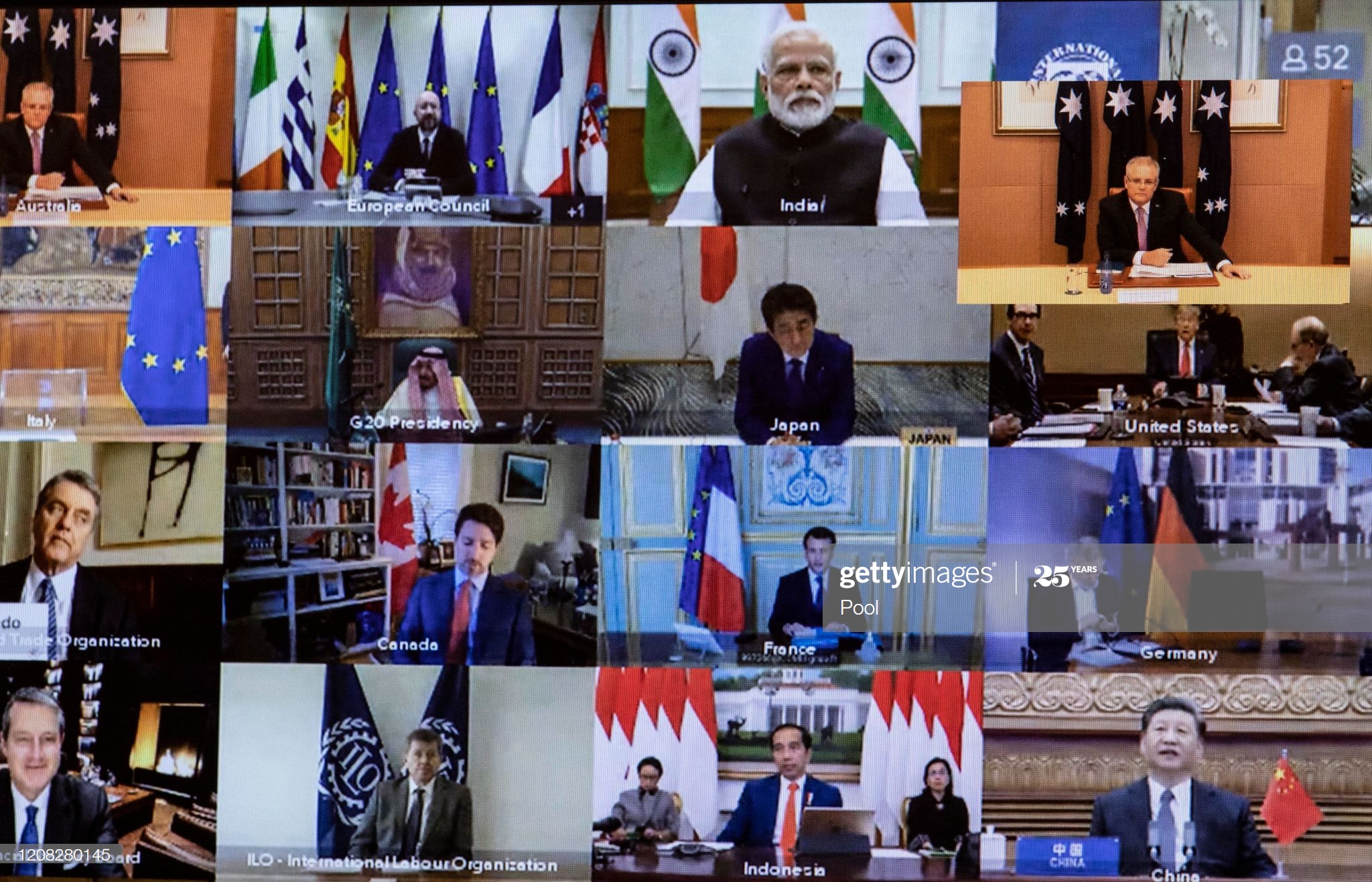 The G20 convened an extraordinary leaders’ summit on March 26 to coordinate the response to the ongoing COVID-19 epidemic. A communique after the meeting focused on four areas — fighting the pandemic, safeguarding the global economy, assessing international trade disruptions and enhancing global cooperation.

A few takeaways on the outcome:

First, while the summit summary stops short of any landmark announcement (similar, for example, to the G20 capital injection of $1.1 trillion into the World Bank and IMF in 2009 in a bid to shore up the global economy against the financial crisis), it did state that the G20 governments are injecting more than $5 trillion into the global economy as a stimulus to counter the adverse impact of the coronavirus outbreak.

The show of solidarity will empower G20 governments and others of like mind to marshal the mandates needed to launch similar stimulus measures.

Second, the summary acknowledged the essential roles of the World Health Organization, the World Bank, IMF and other international bodies as part of the coordinated global response to the crisis.

Early on, the World Bank and IMF issued a joint call to action in which they appealed for creditors to suspend the debt payments of low-income countries to ensure sufficient liquidity to tackle the economic fallout of the crisis. Time was also needed to make a full assessment of the financing needs of such countries.

Third, the summary said the world must gear up for a global slowdown because of a contraction in output, but the breadth and depth of the slowdown is still manageable. The global supply chain looks set to be disrupted at least temporarily, and the pace of its recovery depends on the strength and scope of the global response.

While it is difficult to quantify the exact impact of the evolving situation on the global economy, it is clear that sharp contractions of economic output, consumer spending, corporate investment and international trade are already happening. The UN Conference on Trade and Development said the impact of the outbreak in China had cost global value chains $50 billion in exports. The International Labour Organization estimated that the outbreak could result in a rise in global unemployment between 5.3 million and 24.7 million. An earlier OECD report projected global GDP would shrink from 2.9 percent in 2019 to 2.4 percent this year, before picking up to about 3.25 percent in 2021.

A brief review of how the G20 came to where it is today is warranted.

In 1975, the United States, Japan, United Kingdom, Germany, France and Italy, and later Canada, held a summit to coordinate their economic policies. The scope of discussions eventually expanded to economic growth strategies, monetary policy, trade liberalization, energy security and other issues of significance.

In 1997, Boris Yeltsin attended a G8 summit, but Russia’s presence was more about style than substance at that time, given its economic weight of 1 percent of global GDP, versus 26 percent for the U.S. at that time. In December 1999, the first G20 Finance Ministers and Central Bank Governors Meeting was held in Berlin. Twenty members were represented at the meeting, marking the inception of the G20, as it is known today. Nearly all economies of systemic importance are part of this forum.

From 1999 to 2007, the G20 was confined to economic and financial matters, hosting discussions for finance ministers and central bank governors on fiscal, monetary and financial issues. In essence, the embryonic G20 was more or less the “G7 plus” at best, with the G7 at the helm of agenda-setting and decision-making.

In 2000, the G7 club, in the grip of the cascading global financial crisis, pressed for a platform of coordination with emerging and developing powers. U.S. President George W. Bush proposed convening a G20 Summit in the wake of the financial crisis.

Emerging and developing countries began to play a greater role as interlocutors in the G20, and the forum has matured into a more sophisticated structure comprising summits, sherpa meetings, ministerial and vice ministerial meetings and specific task force meetings.

In a landmark achievement, the G20 Summit pledged $1.1 trillion to the IMF and World Bank to restore growth, including $750 billion and $250 billion SDR to the IMF, and $100 billion of additional lending to MDBs.

Over the years, under the auspices of the G20, the Financial Stability Board was set up. Issues such as macro-prudential regulations, forestalling the failure of entities that are “too big to fail” and developing a global financial safety net were addressed. Credit rating, shadow banking and accounting standards have been staples of G20 discussions.

In an increasingly interconnected globalized economy, much of the production and manufacturing activity has shifted to emerging and developing countries, while the end products are consumed around the world, including in developed countries.

It is imperative for all countries along global value chains to have a forum in which their governments, business leaders and key stakeholders can exchange ideas and explore ways to coordinate economic, trade, tax, financial and other policies. With so much going on around world — and given the surging pushback against multilateralism — would the G20, as the premier forum for international governance and coordination, survive the turbulence or consign itself to an increasingly diminished role? The answer remains uncertain.

COVID-19G20
printTweet
You might also like
Back to Top
CHINA US Focus 2022 China-United States Exchange Foundation. All rights reserved.