The Tragedy of Missed Opportunities

Report on the COVID-19 Human Costs and Economic Damage

My new report, “The Tragedy of Missed Opportunities”, focuses on “the COVID-19 human costs and economic damage". Released by the Shanghai Institutes for International Studies (SIIS), a global think-tank, the report identifies missed opportunities in the virus battle. It outlines the consequent costs in terms of cases, lost lives, and economic damage.

Despite several opportunities to initiate early mobilization outside China and proximate Asia, most major economies did not opt for preemptive action.

In the US, the Trump administration's futile effort to “protect the economy” (read: the markets) has had disastrous repercussions. Yet, the White House still continues to suppress science-based policy responses founded on medical evidence.

The European Union (EU) was more willing but unable to fight the virus proactively. It is not fully integrated and lacks the common institutions for effective response.

Between the first recorded case (Dec 30, 2019) and the WHO’s announcement of the international emergency (Jan 30, 2020), the epicenter of the outbreak was centered in Wuhan, Hubei and nearby Chinese provinces. That’s when China, Hong Kong, and later South Korea mobilized against the virus.

Yet, first cases had also been recorded in some 20 countries worldwide, including the US and Europe. The virus information that China and other early mobilizers used to fight the virus was available to the White House early (Jan 3), while the European CDC began its risk assessments only days later. Still, neither chose to mobilize.

That’s how they missed the major opportunity for proactive mobilization.

The second critical window for opportunity to contain the virus outbreak could be dated from the WHO’s announcement of an international emergency (Jan 30) up until its global pandemic announcement (Mar 10). That’s when the epicenter moved to Europe and then to the US. Yet, full mobilization in both began only 1-2 weeks after the pandemic warning; that is, 6-8 weeks later than proactive mobilization in China and Hong Kong.

Worse, most countries failed to provide the WHO with full case reports until February, which downplayed international cooperation at a critical moment. Inadequate preparedness contributed to new challenges, including faulty test kits and long delays in testing. Meanwhile, huge shortages of personal protective equipment (PPE) endangered the lives of frontline healthcare professionals.

US trade wars added to these shortages. The Trump White House allowed US companies to export PPE, but did not permit Chinese companies to import PPE to the US. Failed responses to the outbreak also exacerbated health risks. Media coverage was high on hype but short on facts, causing a virtual “infodemic”. In turn, many international observers, including even reputable dailies in the West, began an odd battle against the WHO and its leadership.

In these ways, the second major opportunity for mobilization was missed. In cumulative terms, it covers the entire first quarter of the year.

The third missed opportunity is in crisis mitigation. As escalation continued in Europe, the epicenter moved to the US, while quarantines and lockdowns diffused worldwide. So, it was only in April that the social distancing measures, which China initiated in January, were widely introduced in the West.

Where late mobilization and weak enforcement proved relatively ineffective, herd immunity proved effective. As a result, instead of flattening the epidemic curve, many countries bloated that curve for weeks. So, the outbreak will diffuse and linger longer worldwide, while secondary virus waves and residual clusters are more likely to follow. Premature lockdown exits will magnify human and economic costs.

As these costs have soared, some government leaders seek to evade responsibility via a “paranoid style of politics”. That’s why the Trump White House has targeted China as a politically expedient scapegoat in a futile effort to misplace the blame.

In cumulative terms, the first half of the year comprises the first three major missed opportunities.

Next, the epicenter will move from advanced economies to emerging and developing countries with weaker healthcare systems. Without appropriate external support, the net effect could prove catastrophic.

The UN food relief agency has already warned the UN Security Council about an impending “global humanitarian catastrophe” that could push 265 million people into poverty. The adverse feedback effects would be felt worldwide.

That’s how the fourth major opportunity in the fight against COVID-19 could be missed.

In January, there were over 7,700 cumulative confirmed cases in China, but barely a dozen in Europe and half a dozen in the US (based on WHO data).

Assuming the global pandemic’s current growth proceeds at a similar rate, the number of cases could exceed 7-8 million worldwide by the end of the 2nd quarter. In Europe and the US, that translates to a combined 6 million or so. In China, cases could stay below 90,000.

Without appropriate vaccination and therapies, the human costs will continue to climb until the epidemic curves normalize over time around spring 2021 or the start of 2022.

Even in the current baseline case (IMF, Apr 2020), the cumulative loss to global GDP over 2020 and 2021 could amount to about $9 trillion. That’s more than the world’s third and fourth largest economies - Japan and Germany - combined.

Yet, the IMF's current baseline is not adequately realistic because it downplays the weight of the dire economic landscape – the 2008/9 global crisis, the 2010 European debt crisis, the failed global recovery of 2017/18 due to US tariff wars and the consequent global debt accounting for 230% of world GDP - that preceded the pandemic.

So, let’s assume two more realistic trajectories, the Great Power Conflicts scenario and the Great Power Cooperation scenario. Let’s also assume, as many analysts and epidemiologists currently do, that there might be a longer outbreak in 2020, a new outbreak in 2021, or both. Then, let’s focus on the “lingering pandemic (2020-21)” sub-scenario, which could materialize, if the Trump administration implements its trade war threats (Table). 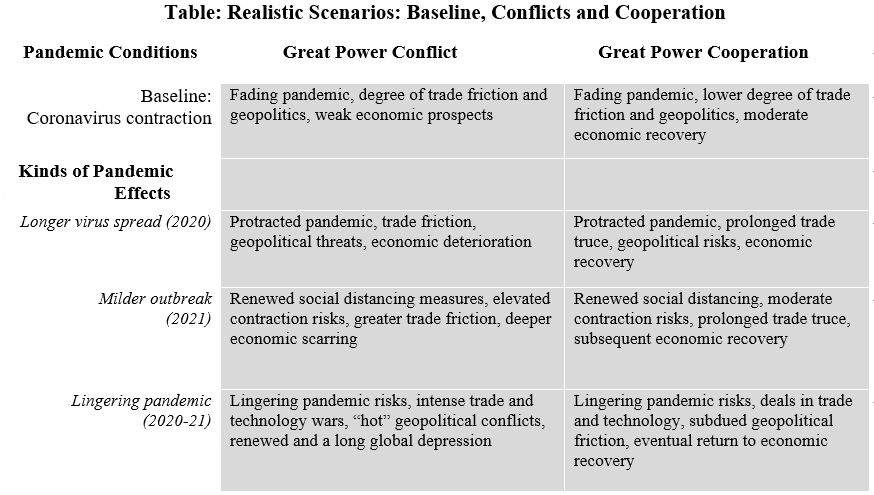 The Great Power Conflicts scenario presumes progressive deterioration of pandemic and economic costs. In this alternative, lingering pandemic risks would generate intense trade and technology wars, “hot” geopolitical conflicts, and a long, multi-year global depression. Unlike US Great Depression in the 1930s, it would result in gloomier outlook since the output potential of the US and major Western economies was in secular stagnation well before the global pandemic. This is the current path of the Trump White House.

In the Great Power Cooperation scenario, pandemic and economic costs would be significantly reduced. In this alternative, lingering pandemic risks would prove longer than expected, but deals in trade and technology and more diplomacy-driven geopolitics would foster economic recovery. This appears to be the preferred path of China, the EU, and US opposition of the Trump White House.

Here's the inconvenient truth: If the late mobilizers and failed mobilizers had followed the proactive measures of the early mobilizers, millions of people could have avoided the virus and hundreds of thousands would remain alive.

Politicized suppression of science-based medical advice should have no role in the battle against the global pandemic. There was nothing inevitable about this global pandemic, but the costs of complacency will prove high, very high.

COVID-19Global GovernanceMajor Power Relations
printTweet
You might also like
Back to Top
CHINA US Focus 2022 China-United States Exchange Foundation. All rights reserved.