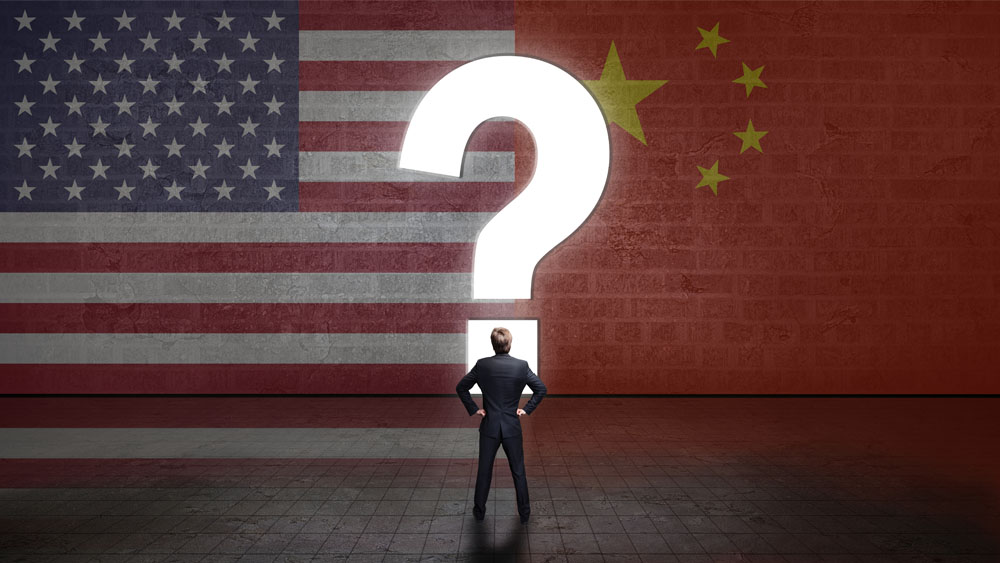 1. How should we evaluate present-day China-U.S. relations?

A few years ago, many were asking the question: “Are China and the U.S. headed to a new cold war? My answer then was no, and the reason was simple. The Cold War between the U.S. and Soviet Union had three prominent features.

The first was fierce ideological competition. The U.S. promoted American-style freedom and democracy at the global level, while the Soviet Union preached Soviet-brand socialism.

The second feature was that the U.S. and the Soviet Union were engaged in an all-around military confrontation. Both countries carried out global strategic deployments and maneuvers against the other. For that purpose, they formed confrontational military alliances, such as NATO and the Warsaw Treaty Organization, fought proxy wars in other countries and engaged in a large-scale arms race.

The third feature was that their economies were largely independent of each other. Not only did the two countries had few economic links, they also built their own respective international economic systems — the U.S.-led GATT and Soviet-led Comecon.

The probability of China and the U.S. entering a similar cold war with these features is low.

First, ideological competition doesn’t really exist between China and the U.S. Competition is a two-way phenomenon. However, when it comes to China and the U.S., it’s always the U.S. that is promoting its ideology to China, while China so far has not only refrained from exporting its ideology but has also been emphasizing that countries should choose their own development paths based on their own national conditions. That is to say, they should not dogmatically follow models provided by others. Therefore, there is no such a thing as ideological competition between the two countries, let alone a fierce one.

Second, there is no all-around military confrontation between China and the U.S. Although the two countries have military standoffs and frictions in the South China Sea and Taiwan Strait, China has not made global strategic deployments against the U.S., nor has it engaged in an all-out military confrontation or arms race.

Finally, China and the U.S. are highly interdependent economically. After decades of exchanges, the two countries have developed very close economic and trade ties. Both the volume of bilateral trade and two-way investment are enormous. In addition, both share a significant interest in preserving a free and open international economic system. Against such background, economic decoupling would be very costly. Accordingly, if the two sides handle their economic and trade ties rationally, it is hard to imagine they would make such a choice.

Since Biden’s inauguration, however, America’s China policy has not only maintained the toughness of the Trump years but has stepped up pressure on China over human rights. More efforts are being made to form anti-China alliances, and more dramatic steps have been taken to challenge Chinese sovereignty on the matter of Taiwan. As a result, a year into the Biden presidency, instead of improved China-U.S. relations one sees further deterioration, even going to the brink of military conflict over Taiwan.

Consequently, between the two countries, ideological competition keeps escalating and military confrontation is emerging. Despite the close economic and trade ties, the trend of science and technology decoupling, as well as economic and trade decoupling, are underway. Maybe a new cold war hasn’t arrived yet, but it no longer looks distant. More efforts are needed to prevent it from materializing.

2. Why has the bilateral relationship arrived here?

There are many reasons that China-U.S. relations have reached this state. Five factors are of particular relevance:

The first is the impact of the so-called Thucydides trap proposition. Although it is a problematic one, many people in both countries subscribe to it. As a result, people in both countries are likely to understand China-U.S. interactions from this perspective, and conflicts over such issues as territorial and maritime disputes in the South and East China seas, as well as Taiwan, are likely to continue.

The second factor is the impact of divergence in political systems and values. For decades since China-U.S. rapprochement in the early 1970s, many Americans have advocated a policy of engagement with China, expecting that it would change to become more like the U.S. In recent years, they have felt betrayed because China has been changing in a different direction. As a result, the difference between China and the U.S. in political systems and values has not narrowed but widened, making it even more difficult for the two countries to deal with each other pragmatically.

The third factor is the impact of Trump. When he was in office, he initiated various tough measures against China, measures that went far beyond previous administrations in both toughness and viciousness. In part because this has persisted, Americans’ perceptions of China have become more negative than ever. The two countries are in a process of decoupling in science and technology. And both find it difficult to cooperate on anything.

The fourth factor is the impact of U.S. domestic politics. Since normalization of relations between China and the U.S. in 1979, whenever an opposition party candidate gets elected to the White House, he adopts some policies that affect China-U.S. relations negatively. Biden’s election is no exception. The U.S. domestic consensus about the need to be tough on China and Democrats’ slim advantage in Congress also create a political necessity for Biden to take a tough stance against China if he wants to get anything done at home.

The fifth factor is the impact of negative interactions between the two countries. The harsh exchange of unsubstantiated accusations, especially during the Trump years, fueled mutual suspicion and animosity between the countries. And it is still going on despite the change in U.S. administrations.

Because of these and other factors, the space for improving China-U.S. relations has become limited and the chance for the relationship to return to a state of engagement and cooperation is almost nil.

3. What are the prospects?

The current state of affairs does not bode well for improved China-U.S. relations in the foreseeable future.

First, the Thucydides trap way of thinking will continue to shape the relationship and may have an increasingly negative impact on bilateral ties. With China’s continued rise, China is likely to make greater efforts to assert its sovereign claims in the South and East China seas as well as on Taiwan. Many in the U.S. are likely to see these efforts as part of an expansionist agenda for regional dominance at the expense of U.S. influence and interests. The Pacific Deterrence Initiative published by the Pentagon holds China as the No. 1 “pacing challenger” and top concern.

The U.S. believes China’s more proactive effort to defend its claims in the South China Sea is aimed at overseas expansion and elbowing the U.S. out of the Asia-Pacific. Accordingly, the U.S. needs to continue its so-called freedom of navigation operations to maintain its presence and persuade its allies to join in. Under the circumstances, the U.S. also believes it is more important than ever to prevent Taiwan from falling into Beijing’s hands. Biden once claimed in an open speech that if the Chinese government uses force to reclaim Taiwan, the U.S. will help defend it. The U.S. Congress has also been very proactive on Taiwan and passed numerous acts to urge the White House to support Taiwan at all costs.

Against that backdrop, more people in both countries have begun to explain each other’s motivations from the worst perspective. And more people choose the Thucydides trap way of thinking on China. Their voices are increasing pressure on both governments when it comes to making policy for bilateral ties.

Second, the differences between the Chinese and American political systems and values are likely to affect the relationship negatively more than before. Recently, both China and the U.S. have been emphasizing the virtues of their respective institutions and values. Since assuming office, Biden has tried hard to rebuild public confidence in democracy at home and allies’ confidence in U.S. democracy overseas. He has attached much more importance to ideology and values than his predecessor.

In December, the U.S. convened an online Summit of Democracies with leaders of 110 countries and regions. Its purpose was to highlight the U.S. commitment to democracy and the country’s role as a global ideological leader. On China, the U.S. has sensationalized human rights issues in Xinjiang, Hong Kong and other areas of China. In the meantime, to enhance party-building and consolidate the Communist Party’s leadership role, China has also vowed to honor its ideological commitment and has repeatedly emphasized the virtues of the Chinese political system.

Against this background, the differences in ideology and political systems are likely to enlarge even more in the foreseeable future, which does not bode well for China-U.S. relations.

Third, although Trump is no longer in office, his legacy of China-U.S. confrontation is likely to continue. Since coming into office, the Biden administration has not only adopted Trump’s tough approach toward China but has gone further in some areas. As a result, high tariffs on Chinese goods have remained, science and technology decoupling has continued, military maneuvers around the South China Sea and Taiwan have been on the rise and official relations between the two countries have been cold and not constructive.

Fourth, domestic politics in both countries is likely to spur the relationship into greater conflict. In the U.S., the domestic consensus on the need to maintain toughness on China makes it almost impossible for Biden to try to improve China-U.S. relations even if he wishes otherwise. In the foreseeable future, whatever major goals Biden wants to accomplish at home — including asking Congress approve his economic plan and win votes for the Democratic Party in the midterm elections — he will have to maintain toughness on China. Thus confronted with a perception of U.S. hostility, public opinion in China also makes it difficult for the government to cooperate with the U.S.

American mainstream media are likely to continue to turn a blind eye to the achievements China has made in economic development, pandemic containment, emissions control, poverty relief and anti-corruption and to exaggerate problems. China’s mainstream media are likely to remain focused on critical and satirical coverage of major U.S. political and diplomatic policies and issues.

Against this background, the relationship between the two countries is being transformed from one of competition over interests to one of struggle over values and identity. The former is focused on how interests are distributed, and the usual outcome is a compromise. The latter, however, is about right and wrong, good and evil, over which there is no room for compromise. If there is only a competition of interests between two countries, there will be room for stabilizing and improving relations. But if it's about values and identity, then it’s a zero-sum game. This isn’t good for the future development of the relationship.

In the short run, out of concern about blundering into war by accident and the pressing needs for collaboration in certain realms, China and the U.S. may reach agreement on crisis management and climate cooperation. But the space for stabilizing bilateral ties is likely to be extremely limited. The chance of the relationship deteriorating further is more likely, while returning the relationship to engagement and cooperation is next to impossible.

From a mid- and long-term perspective, there is still reason to be optimistic. Given the fact that China and the U.S. share many common and overlapping interests on bilateral and multilateral issues and the fact that China-U.S. confrontation is very costly, hope remains that the two countries will stabilize their relations and re-engage with each other in cooperation. In short, whereas there is little reason for cheer about the relationship in the short run, one can still afford a certain degree of optimism when looking down the road.